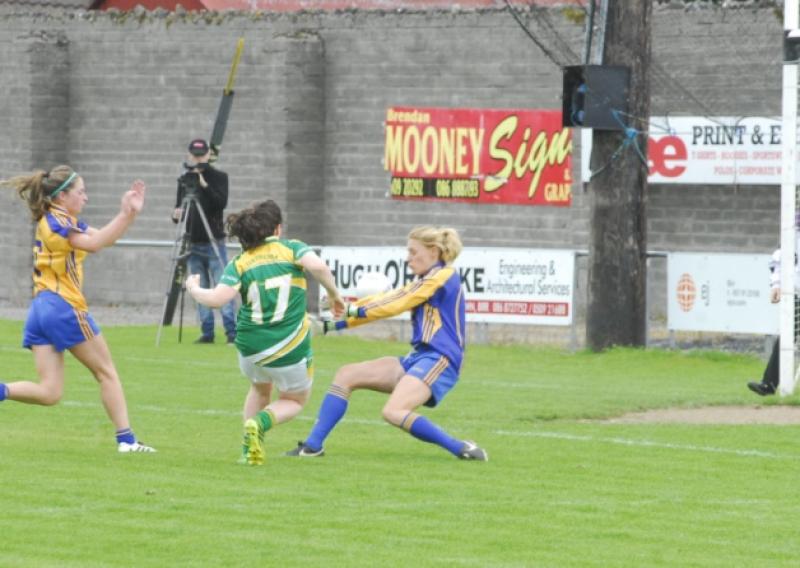 It wasn’t convincing, it wasn’t a polished performance but a magnificent Aine Tighe led Leitrim into the All-Ireland Semi-Final in Birr last Saturday.

It wasn’t convincing, it wasn’t a polished performance but a magnificent Aine Tighe led Leitrim into the All-Ireland Semi-Final in Birr last Saturday.

Two late goals on the break handed a fortunate Leitrim victory and a place in the semi-final against Waterford on Saturday week as Clare must be wondering exactly how they let this game slip.

Leitrim’s first two scores and last two scores were goals, three of which came from the magnificent Aine Tighe who was simply unplayable on the day as she landed three goals and set up the other, Clare simply had no answer to her running with the ball as only three other Leitrim players got on the scoresheet.

Tighe may have had better days but there were few as important as this one as Clare put Leitrim under huge pressure and caused Pat Costello’s side awful problems. And it was Leitrim’s ability to hold out, some poor Clare finishing and the brilliant Tighe that ensured the victory.

It was not their most accomplished victory but it was a victory as the Leitrim ladies showed a know-how and experience that many teams would simply love to have.

Clare almost got the perfect start when Aoife Keane burst through but shot into the side netting. It proved a costly miss as, just two minutes in, Aine Tighe received a quick free and raced through to fire a great shot to the Clare net for the perfect start.

Clare, however, started to fight back with Grainne Nolan converting two frees after a wide and Louise Woods played a one-two in the middle of the park and soloed 50 yards to score.

But just as the Munster side were poised to take control, lady luck shone brightly on Leitrim when a poorly hit Tighe free went through the hands of a defender on the goal-line for a shock goal.

Leitrim’s poor attacking return continued but Aine Tighe missed two frees while Deirdre Ward also shot wide. However, a more critical miss came at the other end when Aoife Keane gathered a long ball behind the defence but dragged the shot wide of the far post.

Clare didn’t have long to wait for a goal when Niamh Keane soloed in from midfield and produced a great finish for a Clare goal.

Leitrim hit back with an Aileen Maguire point but Clare surged into the lead with points from Mahon, Keane and Nolan (free) as the Division 2 team looked to take control but when the pressure was at it’s greatest, Leitrim responded with three Aine Tighe points in a six minute spell.

Clare were also missing good chances, Roisin Howley hitting the post while a poor Michelle Guckian clearance looked certain to result in a goal only for a huge let-off when Aoife Keane’s shot crashed off the post.

Leitrim had a chance of a third goal in added time when Sarah McLoughlin and Aine Heslin put Aileen Maguire clear on goal but Clare keeper Emma O’Driscoll made a good save to deny the Aughawillan player a goal.

Leitrim then followed up with two bad wides but Leitrim led 2-4 to 1-6 at the halftime break. The second half opened far more cagily as both sides missed good chances, Deirdre Ward blasted wide as a goal appeared on while Grainne Nolan soloed through at the other end and blasted into the side-netting with Guckian to beat.

Leitrim seemed to be taking control with points from a Tighe free and Sarah McLoughlin but Marie Considine pointed after a good run from Ellie O’Gorman. Dearbhaile Beirne had a snap shot saved before Aine Tighe converted a free on 13 minutes.

Incredibly, that was to be Leitrim’s last point as Clare started to fight back, Becky Mahon pointing after a clearance was blocked while Nolan put over a free after Claire Beirne was very lucky to avoid a yellow card for a blatant pull down of Mahon as she was charging through.

Nolan added a free after a Mairead Stenson foul and Clare went in front with less than 10 minutes left when Mahon pointed after advantage was played after another late foul on Niamh Keane.

Crucially, Clare hit a couple of poor efforts and Leitrim were hitting on the break, Clare keeper O’Driscoll making a good catch from a fisted Tighe shot after a long Sharon Kerrigan delivery.

Clare should have gone back in front with a Howley shot from right in front of the posts but the ball hit the post and went wide and from the kickout, Leitrim won the ball with a long delivery finding Aine Tighe. She raced through the cover and off-loaded to sub Emma Guckian who drilled the ball to the far left corner for a crucial goal.

Clare weren’t finished and another attack saw Mairead Stenson yellow carded. From that free, Clare worked the ball for another free and a Claire Beirne foul resulted in Nolan leaving just a point between the teams as the game went into added time.

But as they had done all day, Leitrim found the perfect response when a long ball was released to Emma Guckian and as the forward bore down on goal, she was taken out. A yellow card arrived for Kayleigh McCormack while Aine Tighe sealed the win with a decisive penalty.

Clare refused to give in and even hit the woodwork once more but the gap was too great and Leitrim celebrated a hard earned win.