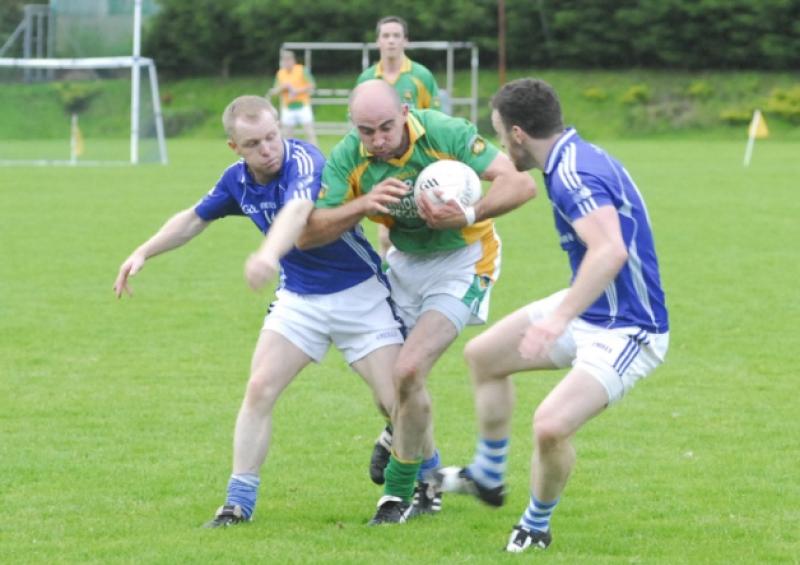 Against the odds Drumreilly produced a heroic display to secure their place in the quarter final of the Connacht Gold Senior Championship when they overcame the challenge of Carrigallen on Saturday evening in Ballinamore.

Against the odds Drumreilly produced a heroic display to secure their place in the quarter final of the Connacht Gold Senior Championship when they overcame the challenge of Carrigallen on Saturday evening in Ballinamore.

Having to play all but six minutes of the second half with 13 men would be a challenge too far for many teams but Drumreilly dug deep after Dermot Holohan was red carded in the first half and Ollie Maguire was then given his marching orders in the early stages of the second half.

Having suffered a heavy defeat at the hands of Mohill in the group stages of the Championship it was hard to see how Drumreilly could reignite their campaign but a win over Allen Gaels in their final group game meant they secured their place in Saturday’s play-off encounter to keep their hopes of a last eight place alive.

Carrigallen’s group games saw them draw against defending champions Aughawillan before defeating Bornacoola. Their final group game saw them suffer at the hands of Glencar/Manor meaning they took their place in the eighth place play-off with the winners advancing to the quarter finals and the losers taking their place in the relegation semi-final.

A large crowd was present for the game and what an encounter they were treated to.

The opening stages gave little indication of what was to follow as the game was almost seven minutes old before Carrigallen’s Thiernan O’Rourke struck for the game’s opening point with a wonderful left footed effort from distance.

The lead was doubled when Derek Reilly converted a free and the advantage was extended to three points when Gary Reynolds, scored a brilliant point from the stand side of Pairc Sheain Ui hEislin with the outside of his right boot.

Drumreilly had unquestionably been second best during the opening quarter although did have moments to offer encouragement for their supporters. Declan Maxwell saw a dangerous delivery punched clear by Carrigallen goalkeeper Enda Lyons while Dermot Holohan’s rampaging run forward led to Drumreilly’s opening score in the 19th minute. Holohan saw his shot deflected wide and from the resulting 45 the ball was played short to Graham Taylor who slotted the ball between the uprights.

Unfortunately for Drumreilly the marauding runs offered by Dermot Holohan were not to be available to them for much longer as he was issued with a yellow and a black card within the space of two minutes meaning he was then shown a red card.

The disappointment of that red card vanished within two minutes from the faces of the Drumreilly faithful as they saw their team strike for the game’s only goal. James Holohan saw his shot brilliantly saved by Enda Lyons but Donal McCabe was on hand to force home the rebound from close range.

Carrigallen levelled matters with a Derek Reilly converted free but even with the man advantage they were finding it difficult to convert possession and chances into scores. Ciaran Reilly saw his shot cleared off the line while the normally deadly accurate Enda Lyons saw a 45 trail wide.

In the final minute of the half Drumreilly went back in front courtesy of a Derek Reilly free and a minute later the scoring was completed by James Holohan.

Trailing 0-4 to 1-3 as the second half got underway, Carrigallen looked determined to reassert themselves on the game and points from Padraig Doyle and Derek Reilly (free) within five minutes of the restart levelled matters.

The momentum at this stage seemed to be with Carrigallen and they received a further boost when a second Drumreilly player saw red. Ollie Maguire had already been yellow carded in the first half and when he was show a second yellow, and subsequently a red, Drumreilly’s task looked considerably tougher.

The reaction throughout the ground indicated most believed that decision would prove decisive. However, the Drumreilly players thought otherwise as they produced an inspired and heroic display.

Incredibly Carrigallen failed to score for 18 minutes against 13 men and the longer the game progressed the more it became apparent that the most unlikely of victories was becoming more and more probable.

Declan Maxwell, Nigel Maguire, James Holohan, John McKeon, Sean Fee and Dylan Mimna helped inspire those around them in what was an incredible display of guts, heart and skill. James Holohan and Brian Fee both scored stunning points to leave a goal between the sides with 13 minutes remaining.

Carrigallen struggled desperately in terms of how to play against 13 men. With Drumreilly routinely having just one in attack, perhaps Carrigallen will rue not committing more forward.

Carrigallen ended an 18 minute scoreless streak with points in quick succession from Gary Reilly and Gerard McDermott to reduce the deficit to a point.

However, Drumreilly hit back with a Conor Gaffney free from a very difficult angle.

In injury time Gerard McDermott reduced the deficit to the bare minimum once more and there was a feeling that extra-time was inevitable but that was as close as a shell-shocked Carrigallen would come.