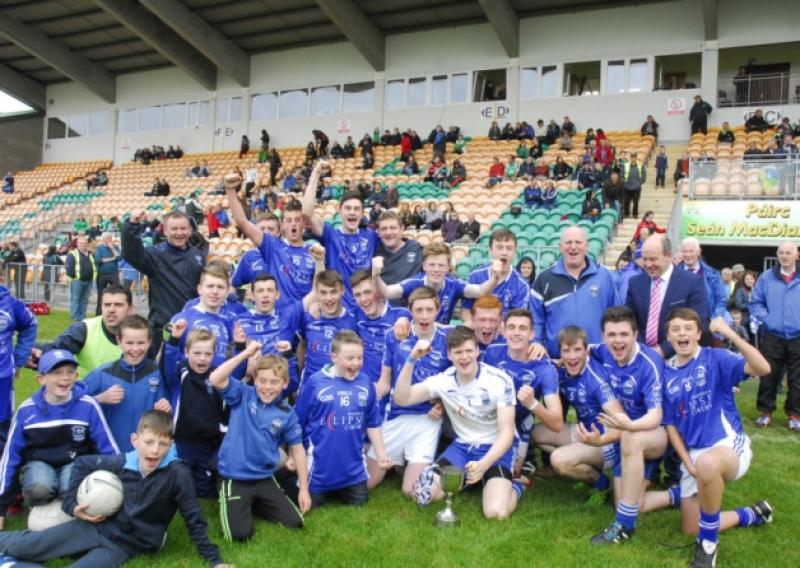 Melvin Gaels claimed their fourth successive Minor B Championship title on Saturday last when they overcame the challenge of Dromahair in a game in which anything that could go wrong did go wrong from a Dromahair point of view.

Melvin Gaels claimed their fourth successive Minor B Championship title on Saturday last when they overcame the challenge of Dromahair in a game in which anything that could go wrong did go wrong from a Dromahair point of view.

Two injuries inside the opening eight minutes and a red card on the stroke of half-time effectively ended the Dromahair challenge before it even got going. Melvin Gaels, a formidable team to face even with a fully fit team took full advantage of Dromahair’s misfortune as they dominated matters with Cillian McGloin and Darragh Rooney impressing throughout.

Matthew Cleary opened the scoring with a point inside the opening minute after incisive approach play involving McGloin and Rooney.

It was a lead Melvin Gaels never looked in danger of relinquishing as barely a minute later Dromahair were dealt their first injury blow.

Cillian McGloin unleashed a powerful shot which seemed destined for the Dromahair goal but Stephen Kelly intervened with a brave block as he took the full force of the shot to the face.

Unfortunately that signalled the end of Kelly’s involvement in the game and while Dromahair were assessing whether or not Kelly could continue, Melvin Gaels struck for the game’s first goal.

Edward Gallagher and Taylor Simpson combined well as they carved their way through the Dromahair defence and Simpson powered his shot to the Dromahair goal.

With everything seemingly going against them, Dromahair responded and were awarded a seventh minute penalty for a footblock. Robbie Cunningham took responsibility for the penalty which he blasted past Michael Neil Gallagher.

Any hope that Dromahair would now be able to match their opponents and that the game would burst into life failed to materialise as the game was not yet eight minutes old when Melvin Gaels struck for their second goal and even more significantly for Dromahair, they were dealt a further injury blow.

Cillian McGloin’s 60 yard run caused panic in the Dromahair defence and when the ball was played to Darragh Rooney, who went on to be named man of the match, there was a sense of inevitability about the outcome.

Rooney clinically dispatched his shot to the net but unfortunately Dromahair goalkeeper Thomas Foley’s involvement in the game came to an end as another payer appeared to land heavily on him.

Dromahair looked shell shocked as everything seemed to be transpiring against them but Melvin Gaels didn’t let their opponents misfortune effect them as they added four points to extend their lead.

Midway through the half Melvin Gaels struck for their third goal to inflict further misery on Dromahair. Darragh Rooney’s defence splitting pass released Mathew Cleary who applied a composed finish past Kyle Harte who was operating in goals since the injury to Foley.

Robbie Cunningham, now operating in midfield for Dromahair scored a fine individual point but even after just 21 minutes it was apparent it was little more than a consolation score.

Dominating every sector of the pitch Melvin Gaels continued to keep the scoreboard ticking over and on the stroke of half time there was to be a further blow for Dromahair as their talisman Robbie Cunningham was issued with a red card meaning Dromahair’s uphill battle had now become mission impossible.

Leading 3-12 to 1-3 as the second half got underway Dromahair began the second half with renewed fight and reduced the deficit when Martin Feeney, one of Dromahair’s best performers, converted a free after a foul on Mark Kavanagh for which Oisin McGovern was shown a black card.

However, that proved to be little more than a temporary reprieve as Melvin Gaels soon began to boss matters once more and a Declan Clancy point was soon followed by Melvin Gaels’ fourth goal of the game.

Mathew Cleary’s dangerous delivery was met by Joe Connolly who rose above Kyle Harte to force the ball to the Dromahair goal.

Midway through the second half the Dromahair supporters were given reason to cheer when Harte, now operating outfield once more, struck the crossbar and Shane Fowley was on hand to goal from close range.

As they had done throughout the game, Melvin Gaels responded well to any slight setback and they bossed the closing stages as they further increased their lead and saw out the game to record a comprehensive victory.