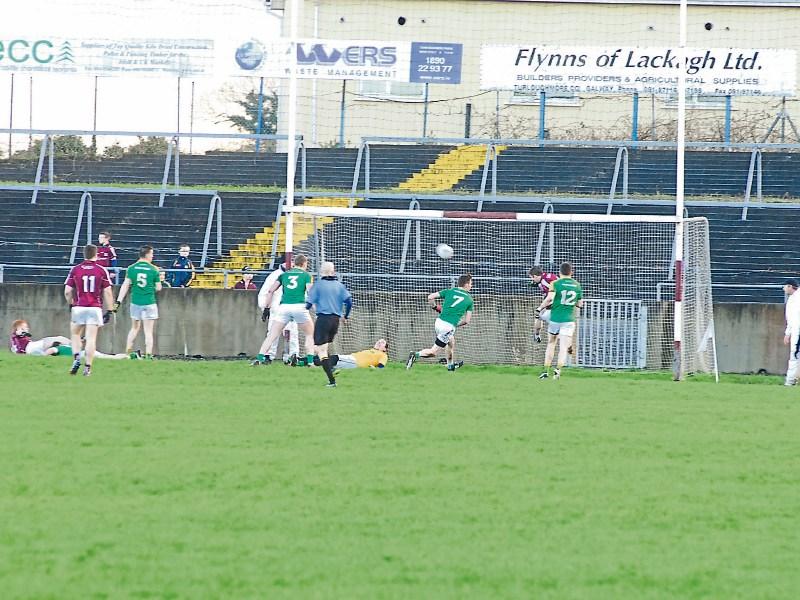 It wasn't quite thrown away but Leitrim did waste a great chance to score a morale boosting victory over Galway in Tuam last Sunday.

Leitrim's hopes for the FBD League are still alive after GMIT's shock victory over Sligo last Sunday. Victories for Leitrim and GMIT would almost certainly put Leitrim into the final unless the college defeats Galway by a massive score as Leitrim have a superior scoring average.

But last Sunday was a real chance to confirm qualification for the final as Leitrim had the home side on the rack for the third quarter but failed to take their chances.

A couple of poor wides from good positions and poor options in attacking positions allowed Galway to hang in there as they looked disjointed and upset by an energetic Leitrim performance.

But the introduction of Danny Cummins in attack and Johnny Heaney in defence made a huge difference to Galway as Cummins grabbed 1-1 within six minutes while Heaney drove his team forward from a tighter defence.

It was, in many ways, a strange game - Leitrim dominated long sections of the game, their high energy style and defensive alignment stymying the home side but Galway also butchered a series of goal chances, forcing two wonderful saves from keeper Gary Hickey who did a fantastic job between the posts.

Paddy Maguire was again an outstanding figure in a hard working defence where Barry Prior & Matthew Murphy also stood out with strong performances, Prior really impressing at centre-back.

Midfield fared reasonably well, Shane Moran in particular showing off his great engine while Shane Quinn's energy was a real asset around the middle of the park.

Upfront, Leitrim didn't fare well with some poor shot selection allied to poor misses not helping a lot of good patient approach play. Nevin O'Donnell escaped Galway attention just once but landed a goal and looks like a real threat if he can get the ball in any sort of space.

In contrast to the ease of scores against GMIT, the rest of the forwards struggled to put away chances but they didn't get the same quality of final ball as they did a week previously.

Still, Shane Ward will have learned some valuable lessons for the League but Leitrim will be anxious to finish the FBD campaign off with a win next Sunday in Ballinamore.

Early wides for Adrian Varley and Emlyn Mulligan were followed by two quick Galway points, Paul Mannion splitting the posts from 40 yards and Eddie Hoare from a free. Both sides had misses, Adrian Croal particularly unlucky to see a good shot hit the woodwork and bounce over the head of a team-mate on the way in.

Nevin O’Donnell opened Leitrim’s account with an 11th minute free and he swapped frees with Paul Conroy midway through the half. Leitrim missed two chances to close the gap before Galway worked the ball back to Eamon Brannigan for a point.

However, Leitrim got a huge boost with nine minutes left in the half - a good one-two with Thomas Mulvey down the right wing saw Nevin O’Donnell regain possession about 25 yards out and his low and pin-point shot flew right to the net for a dramatic goal.

Shane Moran dropped a shot short and Thomas Mulvey had a poor effort as Galway regained the lead before halftime, Fiachra Breathnach breaking into space for an easy point and Eddie Hoare converting a free.

Galway should have had a goal when Damien Comer was clean through with a defender clearly pulling out of him but Gary Hickey made a superb save to deny him a goal as Galway led 0-6 to 1-2 at the break.

Leitrim dominated the first ten minutes of the second half as Shane Quinn collected a pass from Mulligan to pop over a nice point on two minutes. The long ball into Mulligan, now playing at full-forward, was paying dividends as Mulligan hit an easy point.

Leitrim still had to be vigilant at the other end, Micheal McWeeney making a huge block on Breathnach as he bore down on goal while Adrian Varley blasted wide from close range after it seemed certain the home team would goal when Hoare got in behind the defence.

Darren Sweeney had a costly miss that looked wide but was initially given by an umpire before changing his mind and Galway got in front with just over 12 minutes left. A high ball broke in the square, Hoare sending a shot goalwards that was volleyed spectacularly to the net from close range by Cummins.

Cummins and Hoare both missed good chances as the game went 11 minutes without a score as the Tribesmen started to boss the game but without the scores. However, they finally got the insurance point when a Conroy run led to a fine point from Heaney to put Galway three clear.