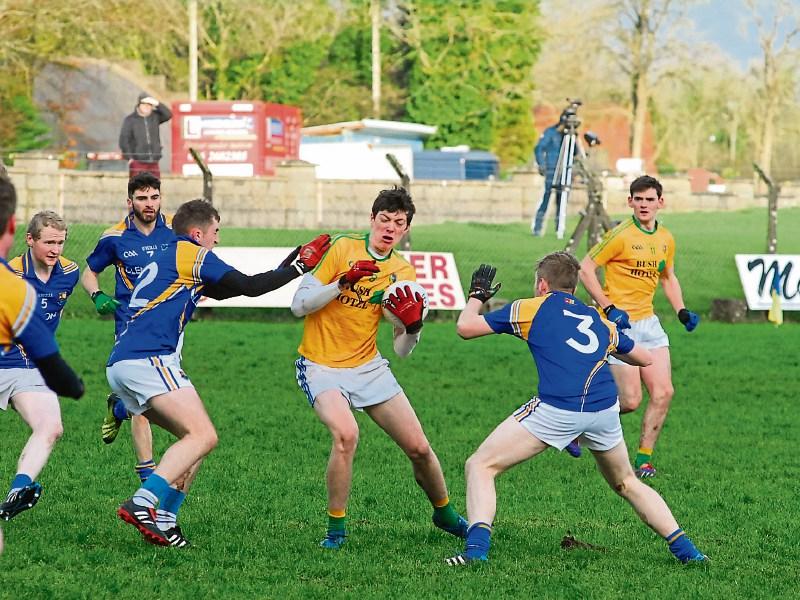 Leitrim never led during an enthralling encounter on a very heavy yet surprisingly good Cloone pitch last Saturday. But they also never gave in as they recovered from a two point deficit with less than three minutes to go to earn a draw.

That result means that a Leitrim win against Wicklow next Saturday and an Offaly win over Longford would leave last Saturday's protagonists level on three points apiece with scoring difference then coming into play to see who qualifies for the Shield Final.

A determined Leitrim were always chasing a game where Longford's Shane Kenny at full-forward and David McGivney at midfield gave great exhibitions and were it not for a couple of good Diarmuid McKiernan saves and some poor Longford finishing, the visitors would have taken the points.

There were some good performances for the U21s with Mark Plunkett showing some real sparks of potential, scoring four good points while Daire Farrell showed a lot of nerve to nail two long range frees to earn the draw.

Keeper Diarmuid McKiernan was very solid, Enda Fowley was very strong while Keith Keegan & Alan McTigue also did well in a defence that struggled to cope at times with the movement of Kenny and his team-mates.

Upfront, Leitrim kept battling away but were outnumbered with Liam Ryan carrying out an excellent job in defence as extra-cover.

What was noticeable about the team was their sheer work-rate and refusal to lie down. Time and time again, Longford looked as if they were taking control but each and every time, Leitrim came back strongly to tie the scores and they were well worth a share of the spoils, even if Longford must be wondering how they let the game slip.

Shane Kenny got away with a few extra steps to open the scoring for Longford after two minutes but Leitrim responded after a poor Longford free was intercepted, Pearse Dolan firing over. The impressive David McGivney started off a fine afternoon with a point from the side of the boot on the run on four minutes.

A soft free, converted by Luke Murphy, saw Leitrim keep pace but two points from Kenny and McGivney seemed to give Longford the early control as they led by two. The visitors then missed three good chances and Mark Plunkett took advantage with a well worked point.

Conor Dolan put over a free but Longford seemed to take control when Liam Hughes’ run down the centre opened the Leitrim defence. A pass into Shane Kenny meant a goal looked a certainty but he lost the ball.

Incredibly, Leitrim were unable to scramble the ball clear and at the second time of asking, Kenny drilled home from close range.

Instead of demoralising Leitrim, the score seemed to wake them up, Kenny Cox and Luke Murphy (free) both pointing before a Cullen pass led to Mark Plunkett firing over the bar to tie the scores at the halftime interval at 0-7 to 1-4.

McGivney converted a free in the second minute of the second half but Leitrim came back with a Murphy free two minutes later. Kenny continued to impress, scoring from 45 yards before Longford again had three costly wides in a row.

Halfback Vinny Hourican scored a point and was promptly replaced while Longford could have put the game away only for Jason Matthews to blast wide from right in front of the posts, the Longford man having a very good claim for a penalty under a heavy challenge from Diarmuid McKiernan.

That miss proved costly as Mark Plunkett scored another nice point as both sides traded misses, Longford far more guilty than Leitrim as McKiernan made a great save from Longford’s Conor Berry to deny another goal.

Longford sub Patrick Kiernan was barely on the field a few seconds when he pointed but straight away, Mark Plunkett sent a huge 50 yard effort over the bar to cut the gap.

Leitrim looked like the team with momentum when Alan McTigue punched over a free with seven minutes to go to tie the scores but Longford hit back in style, McGivney capping a great individual display with a well worked point from 50 yards.

Sub Russell Brady then finished off a good move to put Longford two clear with just over three minutes to go.

But Leitrim weren’t finished and two long range Daire Farrell frees saw them claim a share of the spoils, the second in added time.