True ambassadors for county and country 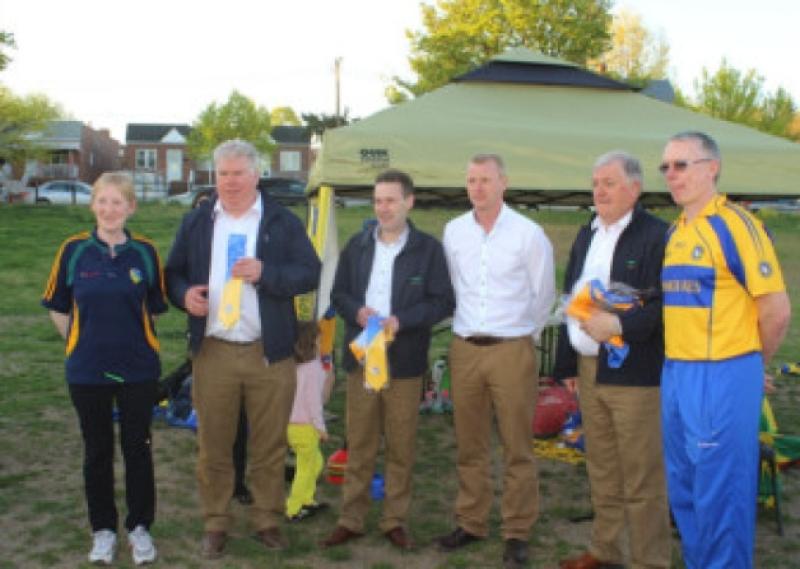 The team was in New York to play the home city in the first round of the Connacht Championship last Sunday. The team were on an extremely tight schedule that centered first and foremost around preparation for the upcoming championship game.

Gaelic Park the venue is an astro turf field which the Leitrim team wouldn’t be used to playing on and the players also needed to get aclimatised as it was in the high 70s, with the astro turf surface further raising the temperature by at least 10 degrees. Joe Flynn, Chairman of the Leitrim County Board and Diarmuid Sweeney, its Secretary had been contacted two weeks prior to their arrival in New York City by Shannon Gaels GAA, a Minor club based in Queens.

The club was founded in 2002 and to date is still the only minor club serving the children of Queens and surrounding areas. Starting with just 12 players, Shannon Gaels GAA struggled on many occasions in their early years to field a full team, now 11 short years later they boast almost 300 players and 19 teams including Camogie and Hurling.

They are one of the fastest growing minor clubs in North America.

Fiona Finneran, with the club since it’s founding and current Vice Chairperson is a native of Glenfarne. Fiona contacted Joe and Diarmuid and explained how their young players aged 4 through 17 years have greatly benefited from past visits to their club by GAA players, representatives and dignitaries.

Their many recent visits include Mickey Harte, Liam O’Neill, members of the 2012 All-Star team to name but a few. She explained that the teams route from JFK to their hotel in Englewood New Jersey was to take them alongside Shannon Gaels home ground in College Point. After much consideration of their hectic schedule the County Board very graciously agreed to meet with Shannon Gaels GAA for a brief visit.

On arriving at JFK the team and representatives were met by members of the Shannon Gaels committee. Joe Gargan a native of Kingscourt and Dennis O’Rourke of Fenagh accompanied the Leitrim group on their team bus. Leitrim Councilor Enda Stenson also took time out of his schedule and instead of traveling directly to his hotel in Manhattan also boarded the team bus as he was eager to meet our young players and see first hand how the GAA is thriving in New York.

Gerry Finneran, Blaithin Finneran and Alan Carolan who arrived on the same flight as the team travelled by car with Wicklow native Eugene Smyth and Gerry’s daughter Fiona who then escorted the team bus along the 10 mile route to Frank Golden Park.

Leitrim flags were flying high from the escort cars and horns were honking along the entire route, much to the confusion of New York’s rush hour drivers.

On arrival at Frank Golden Park the team were honored with a Guard of Honor made up of over 200 young players, coaches and parents dressed in their club colors. Well known in GAA circles on both sides of the Atlantic, Leitrim native Frank Brady and his daughter were on hand to greet the players and welcome them Stateside.

As the team made their way through the Guard of Honor U16 full forward Seamus Finneran played a selection of traditional Irish dance tunes on his fiddle.

Colin Maters, Chairman of Shannon Gaels GAA, and a native of Armagh, welcomed the Leitrim visitors and thanked them most sincerely for their taking time to meet with us. Colin and Fiona then presented Joe Flynn and Diarmuid Sweeney with Shannon Gaels Club ties and jerseys. Unlike Diarmuid who was delighted as our Shannon Gaels colors of that of his own club Glencar Manorhamilton, Joe was a little nervous at the thought of walking round Carrick in the blue and amber of neighbouring rivals Roscommon!

Barney Breen and George Dugdale, Managers of the team were then presented with Shannon Gaels ties.

What happened next will most definitely remain in the memories of your young players for many years to come. The club had provided tea, sandwiches and biscuits for the visitors and while the team’s officials engaged in talks and refreshments with our own committee members, coaches and parents the team had another job in mind.

Although dressed impeccably in matching ‘white’ shirts and dress pants they proceeded to introduce themselves to our 200 strong youngsters and before we knew it the field was packed with Leitrim players and our children engaging in hand passes and ball kicks. The team spent the next 20 minutes tirelessly autographing balls, jerseys and boots. Although hungry and exhausted after traveling by bus to Dublin earlier that same morning and then a 7 hour flight no child was refused an autograph.

It is this dedication to their sport and passing on their love of it to youngsters 3,000 miles away from home that will most definitely ensure the growth of the GAA here in New York.

I don’t know if the players fully understand the impact their visit has had on these young players as indeed they were a very unique and humble bunch, but rest assured that that there are autographed O’Neill’s balls and club jerseys bearing Leitrim names in many hundreds of houses here in Queens and to these children they are more valuable than and medal or cup they have won.

We cannot thank this group of young mannerly ambassadors enough for their time and their encouragement. The friendships made between our club and our Leitrim visitors will certainly last the test of time and we look forward to their return trip to New York in the Fall.

Our members and players turned out in huge numbers to watch and support them today in Gaelic Park and were delighted on their success even though it was heart-wrenching for our home team.

Leitim and indeed the GAA should be extremely proud of the Leitrim Senior Team and their representatives for the role they played as ambassadors for County and Country this past weekend, they have done themselves the GAA and their Country proud.

We wish them the very best of luck as they go forward to the semi final of the Connacht Championship in a few weeks and look forward to meeting them again Stateside.