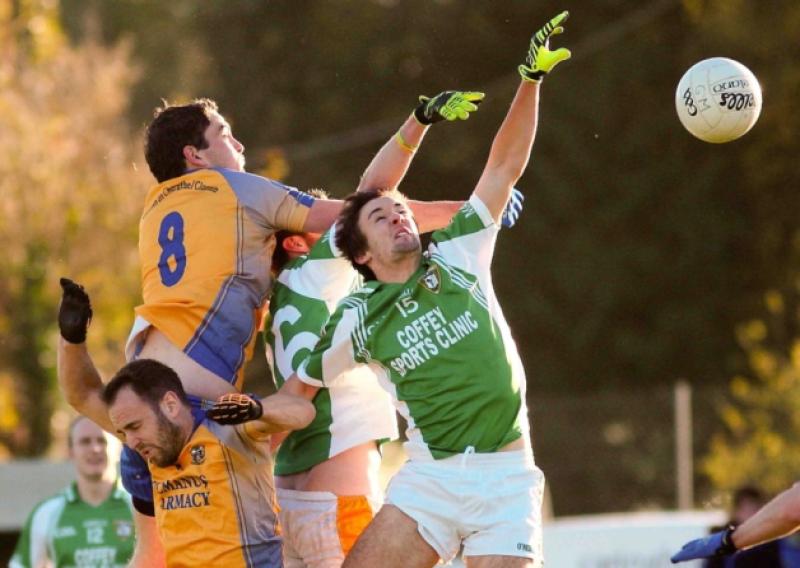 Glencar/Manorhamilton are showing their strength in depth in style as they now sit top of both Division One and Two in the Gallogly Catering Leagues.

Glencar/Manorhamilton are showing their strength in depth in style as they now sit top of both Division One and Two in the Gallogly Catering Leagues.

Glencar/Manor’s 1-17 to 0-8 victory over Drumkeerin means they stay top of Division One on scoring difference from Mohill and St. Patrick’s Dromahair while Aughawillan, previously undefeated, suffered their first loss of the campaign in a derby against Ballinamore Sean O’Heslin’s.

Manor have a scoring difference of plus 32 with Mohill on plus 21 after their 3-14 to 0-9 destruction of Drumreilly and Dromahair on plus 15 after they had six points to spare against an Aughnasheelin team who are proving more than a handful for the top teams.

Aughawillan’s 2-12 to 2-7 loss to fierce rivals Sean O’Heslin’s was perhaps the biggest surprise, coming just a week after the Ballinamore men were well beaten by Aughnasheelin. Ballinamore led by six points at the break and Aughawillan were unable to make the necessary headway to get back into the game.

County champions St. Mary’s Kiltoghert had just a point to spare, a late free, against Gortletteragh as they prevailed 3-10 to 1-15, a result that leaves Gortletteragh in the bottom two with Drumreilly with no wins after three games.

Melvin Gaels scored their second win of the campaign with a 2-8 to 0-4 win over Annaduff, a result that leaves the south Leitrim men just above the drop zone.

In Division 2, Glencar/Manor’s hard fought one point win over Cloone, 0-15 to 2-8, ses them move into sole occupancy of the top spot after Carrigallen suffered a 1-6 to 0-8 loss against Fenagh St. Caillin’s who now move onto four points along with Carrigallen, Allen Gaels and Leitrim Gaels.

The Leitrim men had one of the biggest surprises of the weekend when they defeated Senior Championship side Bornacoola 1-9 to 0-6.

Allen Gaels had a hard fought 1-12 to 2-8 victory over Glenfarne/Kiltyclogher while Kiltubrid were surprising beaten by Dromahair’s second string side, 1-12 to 0-14. Another second string side, Mohill, got their first points of the year against a first string team when last year’s Junior Champions Mohill dew with Ballinaglera, 3-8 to 1-14, as they stay bottom of the table.