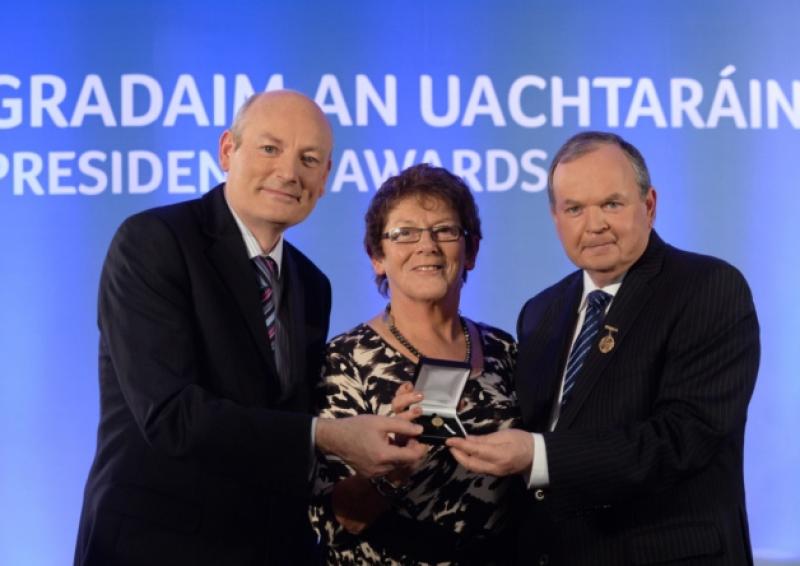 Maureen Lynch from Mohill became the sixth Leitrim recipient of a National GAA Presidents Award on Friday night, at a live televised ceremony at Croke Park.

Maureen Lynch from Mohill became the sixth Leitrim recipient of a National GAA Presidents Award on Friday night, at a live televised ceremony at Croke Park.

Inaugurated in 2004 by then GAA President Sean Kelly, the awards pay tribute to the tireless dedication put in by volunteers to all strands of Gaelic Games both in Ireland and overseas.

A fitting reward for Mohill in the 125th anniversary of the club, Maureen follows in the footsteps of fellow Leitrim natives Packie McGarty, Mary Quinn, John Harte, Gerry Mahon and Peter Heaney in being honoured with one of these awards.

Maureen has held a variety of roles in Mohill over the years - Secretary, Treasurer, PRO and physio but she says her award is as much about the dedication of those around her, as it is about herself.

“I’m just representing the club. Anything I did, I did it with other people helping me. I never did anything alone, nor did I want any reward for it,” Maureen said, “I’m flattered to get this award.”

While Maureen is often seen in pitches across Leitrim, she also has a keen interest in the cultural side of the GAA through her involvement with Scor - “I love football and I was physio with the club for years, and I also was involved with Scor.”

Maureen’s first involvement came through her late husband Tom, a Dingle native, and a relation of the O Se’s from Ventry and former National GAA PRO Danny Lynch - “He trained all of the underage teams in Mohill for years,” she said.

Looking to the future, Maureen says there’s more volunteers than ever before now involved with the club - “The local club Cloone and Eslin played with us underage this year, and the rural clubs are very stuck for numbers.

“We’re ok as a town, but the rural clubs will be hit. When you go down to 5 and 9-a-side it’s not very good football.”

Maureen was joined on the night by 21 members of the Mohill GAA Club, including her daughter Katherine and son Michael along with his wife Grainne, and Maureen’s good friend Phil McGuinness, mother of the late Philly whom she paid tribute to on the night.

“Our pitch is named after Philly, who died while playing. We remember people like Philly on a night like this.”

A total of 15 recipients were chosen by GAA President Liam Ó Néill from across all strands of the Association, representing all codes and disciplines from the wider GAA family, and included former National Ladies Football President Mary Wheatley and former Fermanagh Footballer Mark McGovern.