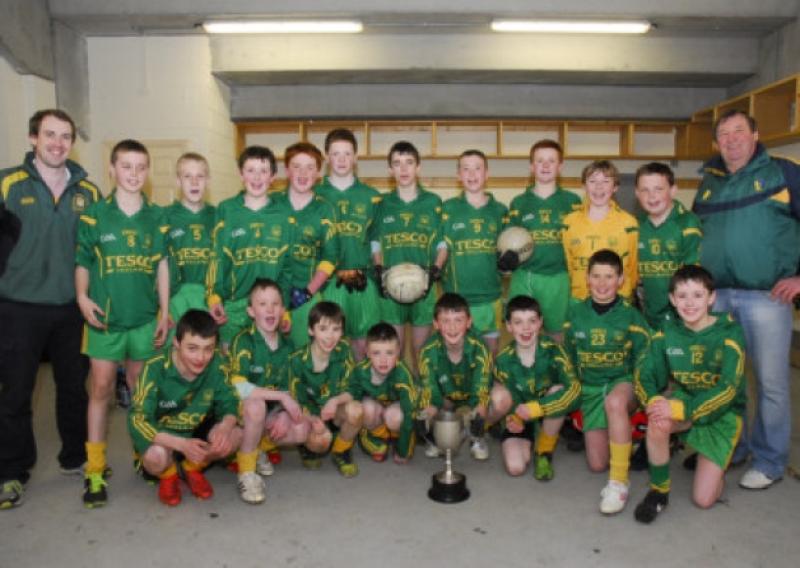 The first Coiste na nOg final of the year was played in Pairc Sean MacDiarmada on Friday evening last and with the bright sunshine bringing the best out of both sets of players those present saw an absorbing game that produced no less than 11 goals and some terrific individual performances. Ultimately it was Ballinamore who emerged victorious in the U-14 13-a-side league final as Barry McGovern, Tom Prior and Conor McGrath played a significant role in their sides victory.

The first Coiste na nOg final of the year was played in Pairc Sean MacDiarmada on Friday evening last and with the bright sunshine bringing the best out of both sets of players those present saw an absorbing game that produced no less than 11 goals and some terrific individual performances. Ultimately it was Ballinamore who emerged victorious in the U-14 13-a-side league final as Barry McGovern, Tom Prior and Conor McGrath played a significant role in their sides victory.

While the scoreline gives the impression of a very convincing win for Ballinamore it must be noted that even though Ballinamore were deserving winners, Carrigallen played their part in what was a very enjoyable game. Colm Kiernan, Jamie Manus and Owen Connolly did their best to keep Carrigallen’s interest in the game alive but the longer the game progressed the more it became apparent that Ballinamore would not be denied.

Carrigallen were the quicker to settle and they deservedly opened the scoring when Sarunas Zenkovas found Colm Kiernan who pointed confidently. Having made a rather sluggish start to proceedings Ballinamore got their challenge up and running when the energetic Tom Prior raced on to a long ball behind the Carrigallen defence and he outjumped goalkeeper Andrew Hession to flick the ball into the goal.

With both sides attempting to gain the upper hand, there was plenty of action but the scoring was at a premium. In fact the game was 13 minutes old before the next score arrived when referee Gerry Gallogly awarded Ballinamore a penalty.

The initial shot was saved by Andrew Hession and the follow-up was blasted off the crossbar before Barry McGovern eventually forced the ball to the Carrigallen goal. McGovern increased his side’s lead with a fine individual point when he ran ta the heart of the Carrigallen defence before shooting.

The Carrigallen supporters would have been hoping for a response from their side and they were given reason to find their voice when Jamie Manus pointed. However, Ballinamore were still looking the stronger of the teams and they duly hit back with a fine point from the lively Tom Prior who was proving to be a real handful for the Carrigallen defence.

With five minutes of the half remaining Ballinamore further extended their lead when Barry McGovern’s shot from distance left Andrew Hession wrong footed and it found its way to the Carrigallen goal.

Trailing by nine points with just five minutes of the opening half remaining Carrigallen appeared to have a real uphill battle on their hands but to their credit they replied immediately with a goal of their own. Colm Kiernan proved to be unstoppable as he showed great control, running from midfield towards the Ballinamore half back line. It seemed as though the midfielder may have been able to continue his run but showing great awareness he delivered a perfect pass to Jamie Manus who unleashed an unstoppable shot past Ballinamore goalkeeper Jack Gallogly to reduced the deficit and breath new life into the Ballinamore challenge.

Leading 3-2 to 1-3 as the second half got underway Carrigallen would have known there was room for improvement and would have been hoping for a bright start to the second half. However, it was Ballinamore who got the quick start as they struck for their fourth goal within a minute of the restart. Barry McGovern appeared to be on the verge of kicking a routine free over the Carrigallen crossbar but having noticed a lack of Carrigallen defenders on the goal line McGovern instead struck his shot low and hard and out of the reach of the helpless goalkeeper.

One of the highlights of the game was the ongoing battle between Carrigallen’s Colm Kiernan and Ballinamore’s Barry McGovern and four minutes into the second half Kiernan played a vital role in his side’s second goal. Once again Kiernan ran at the Ballinamore defence from deep and his powerful shot proved to be too good for Andrew Hession. Unfortunately for the Carrigallen midfielder his shot came back off the crossbar, however, Jamie Manus was on hand to dispatch the rebound to the Ballinamore goal.

Points were exchanged between Ballinamore’s Conor McGrath and Carrigallen’s Ciaran Kenny before Kenny then struck for Carrigallen’s third goal after a clever exchange of passes with Jamie Manus. With a little over 15 minutes remaining Owen Connolly converted a free meaning there was now just a solitary point separating the sides.

In the face of plenty of Carrigallen pressure plenty of questions were being asked of the Ballinamore players and to their credit they answered those questions as they finished the game very strongly, ensuring Carrigallen failed to add to their tally.

Barry McGovern’s excellent individual goal was followed by a Tom Prior point and with 12 minutes remaining McGovern found the Carrigallen again. All of a sudden the game was seemingly beyond Carrigallen as Ballinamore continued to look very strong and they made sure of victory with goals from Danny Smith and Conor McGrath either side of a Barry McGovern point.