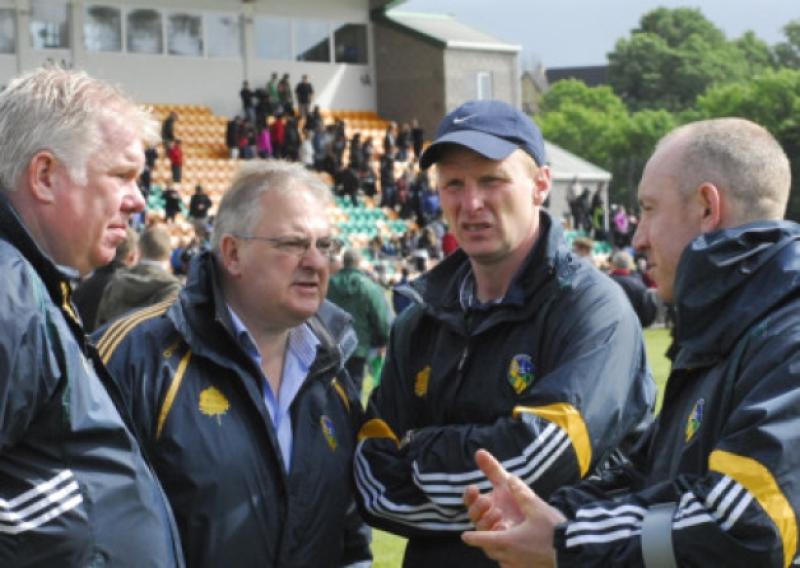 Having seen his team show great strength and character to fight back and claim a draw, Brian Breen was a proud but relieved man at full-time.

Having seen his team show great strength and character to fight back and claim a draw, Brian Breen was a proud but relieved man at full-time.

Giving his reaction after a memorable game and a pulsating finish Brian remarked, “We could have won it but we were still lucky to get the draw. In those 10 minutes when we were behind we would have taken a draw. Today was a day when if anything could go wrong it went wrong for us but I though we showed great character and resilience to churn out a draw.”

One such setback was the loss of captain Emlyn Mulligan but Brian paid tribute to the effort of the entire squad in overcoming such obstacles. “We didn’t plan to lose Emlyn after 10 minutes or whatever time it was but we recovered from that and that just shows the character these guys have.”

While there were plenty of positives, the concession of two goals was one area that Brian was left rueing. “When you look back on them I suppose they were soft, especially the second one, he shouldn’t have got near it.

“There were periods when we were in control of the game and we were dominating and they scored the goal to get them back in it. The goals I think kept them in the game.”

The last minute 45 that could have snatched victory resulted in some confusion as it was announced that Kevin Conlan was to be replaced as the Dromahair forward looked to be readying himself to take the crucial kick. Explaining the situation Brian said, “Kevin had called to come off, the substitution was made and all of a sudden we got the 45. I don’t think Kevin heard he was coming off but he wouldn’t have been fit to take the kick anyway I don’t think.”

Although he had not yet left the pitch, attention was already turning to the replay in Hyde Park with Brian saying, “All we have to do is regroup and gather up and look at our injury situation and move on from there and try and get them fit for Sunday.”