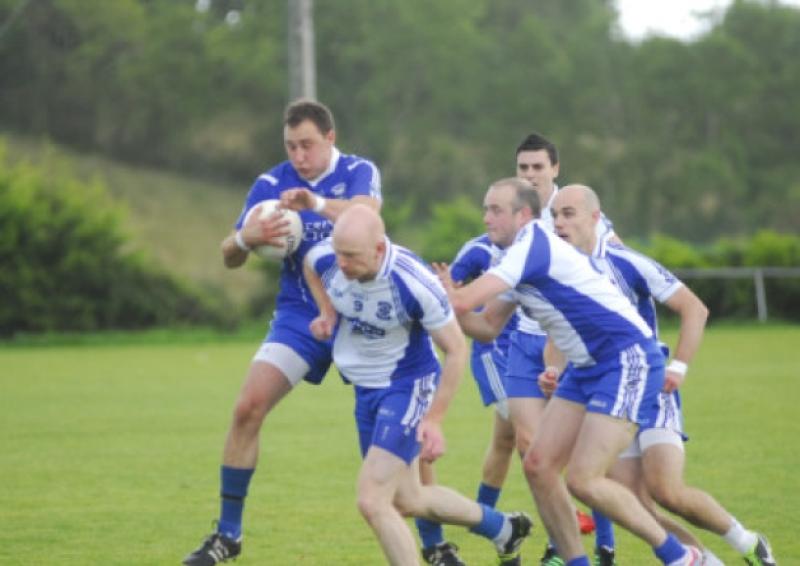 There will be a new name on the Fenagh Cup this year after champions Melvin Gaels exited the Connacht Gold Senior Championship last Saturday.

There will be a new name on the Fenagh Cup this year after champions Melvin Gaels exited the Connacht Gold Senior Championship last Saturday.

With four teams all hoping to follow in the footsteps of the Kinlough men and lift the Cup on Sunday, September 29, Melvin Gaels were left cursing missed goal chances after last Saturday’s tough Quarter-Final replay against St. Mary’s Kiltoghert.

Melvin Gaels had two glorious chances in each half to find the net and in a game as tightly balanced as last Saturday’s replay in the splendid Shane McGettigan Park in Drumshanbo, those missed goals were critical.

St. Mary’s James Glancy played his captain’s role to perfection as he twice denied the champions what seemed like certain goals, the first when he sprinted back and scooped the ball from crossing the line as Melvin Gaels cheers were already beginning to echo.

Melvin Gaels led by four points 11 minutes into the second half but they failed to score for the remainder of the contest as veteran Jimmy Guckian came off the bench to inspire a powerful St. Mary’s final quarter.

However, the Carrick men don’t have long to savour their win as they face an energetic Carrigallen next Saturday in the first of a Pairc Sean Mac Diarmada double bill, Mohill taking on Gortletteragh in the second game.

Gortletteragh will be hoping to follow in the foot-steps of Melvin Gaels in adding the Senior title to the Intermediate crown in successive years but Mohill provide a formidable obstacle to their dreams.

In other news, it is believed interviews will be held this week with prospective candidates for the position of Leitrim Senior team manager although there was a major flutter of excitement when Aughawillan GAA Club announced on their twitter account on Monday evening that Tyrone great and recently resigned Fermanagh manager Peter Canavan was joining the Club as their “Director of Football” for the rest of the season.

Aughawillan, who drew with neighbours Drumreilly in the Senior Relegation Semi-Finals last Saturday thanks to a late goal, may have got a little carried away by the “Transfer Deadline Day” madness on Sky Sports but the tweet garnered a huge reaction from around the country.

In the other relegation semi-final, Kiltubrid ensured their Senior status for another year with a 3-10 to 0-9 demolition of a Bornacoola team in real trouble.