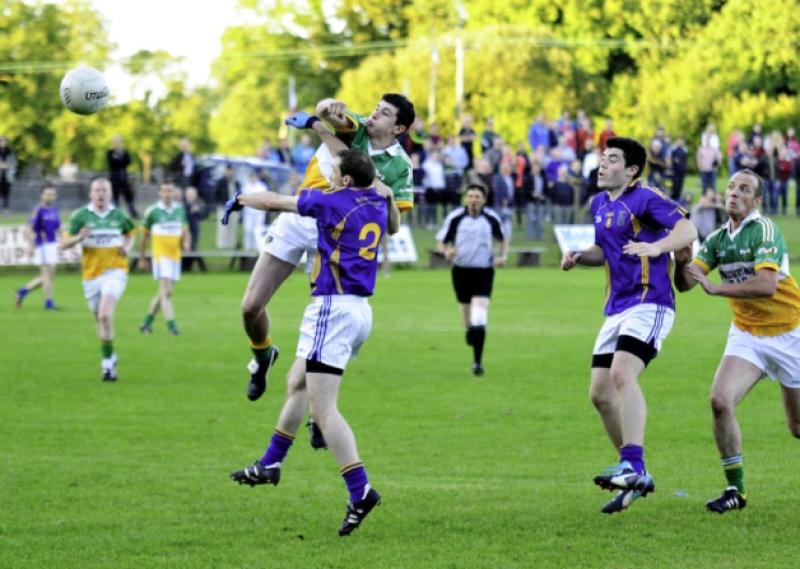 Glencar/Manorhamilton’s reward for a convincing 0-12 to 1-6 victory over 2013 County Finalists Mohill on Sunday evening is a meeting with defending champions St. Mary’s Kiltoghert in this year’s Semi-Finals.

Glencar/Manorhamilton’s reward for a convincing 0-12 to 1-6 victory over 2013 County Finalists Mohill on Sunday evening is a meeting with defending champions St. Mary’s Kiltoghert in this year’s Semi-Finals.

The last Connacht Gold Senior Championship Quarter-Final saw Glencar/Manorhamilton overcome the dismissal of Adrian O’Flynn and a Padraig Tighe penalty in the same incident in the first half to run out three point winners.

The north Leitrim men should have been far more convincing winners against a Mohill side who never truly found their form and would have been cut adrift were it not for Tighe’s penalty.

Mohill, to their credit, kept battling away but could never get closer than two points to the Manorhamilton for whom Darren Sweeney, James Glancy, James Rooney, Shane Loughlin and Evan Sweeney were outstanding while Paddy Maguire made an unexpectedly early return to the line-up as a second half substitute.

In the GWP Intermediate Championship, a nervous Drumkeerin worked hard to overcome Glenfarne/Kiltyclogher in the curtain raiser in Pairc Sean Mac Diarmada, evenutally winning out 1-10 to 0-8 and to set up an intriguing meeting with neighbours St. Patrick’s Dromahair in the semi-finals.

Ballinamore Sean O’Heslin’s will face Ballinaglera in the other Intermediate Semi-Final in an intriguing compeittion.

The draw was also made for the Pyramid Bookmakers Junior A Championship Semi-Finals with St. Patrick’s Dromahair taking on St. Mary’s Kiltoghert and Kiltubrid taking on Allen Gaels.

The big surprise of the Junior A competition was the exit of favourites Aughavas, the only first string team in the Junior A competition at the hands of Allen Gaels ina 2-13 to 0-13 defeat while St. Mary’s overcame Sean O’Heslin’s 1-14 to 0-5, Kiltubrid defeated Carrigallen 1-15 to 2-7 and St. Patrick’s Dromahair saw off Gortletteragh 1-15 to 1-10.

• For in-depth reports from all of the weekend’s Club Championship action, see Wednesday’s Leitrim Observer.