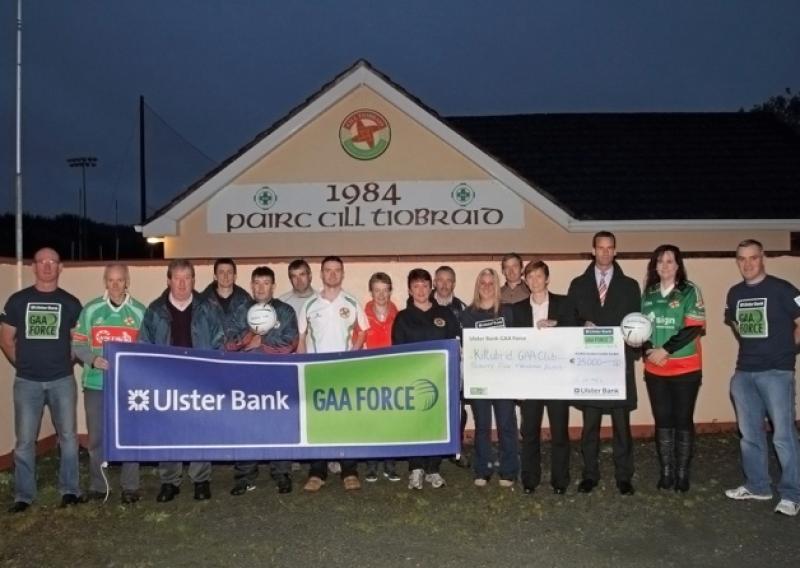 Ulster Bank GAA Force, a community initiative which supports local GAA clubs across the country, has today announced Kiltubrid GAA Club as the winner of this year’s top prize – a support package worth €25,000 to refurbish and upgrade their facilities. Over 430 clubs from across the island of Ireland entered the initiative this year.

Ulster Bank GAA Force, a community initiative which supports local GAA clubs across the country, has today announced Kiltubrid GAA Club as the winner of this year’s top prize – a support package worth €25,000 to refurbish and upgrade their facilities. Over 430 clubs from across the island of Ireland entered the initiative this year.

Four clubs, one from each province, were also announced as runners-up and each will receive support packages worth €5,000. They were Croom GAA Club in Limerick, Dunmore MacHales GAA Club in Galway, Ferbane GAA Club in Offaly and Portaferry GAC in Down.

2013 marks the third year of Ulster Bank GAA Force – run as part of Ulster Bank’s sponsorship of the GAA Football All-Ireland Senior Championship. To date, the initiative has attracted entries from almost 1,400 clubs, and provided over €150,000 worth of much needed support to 315 clubs, since the initiative began. It has also been responsible for a significant number of local volunteers getting behind their clubs, during the designated Ulster Bank GAA Force Winning Weekends, to help carry out renovations.

Speaking at the announcement of the Ulster Bank GAA Force winners, Teresa Keaney, Club PRO, Kiltubrid GAA Club, said: “We are delighted and overwhelmed to have won the national Ulster Bank GAA Force support package. It will allow us to focus on improving the club and make it something the whole community can be proud of. We are extremely grateful to Ulster Bank for their support and we look forward to this exciting opportunity for all our members and supporters.”

Kiltubrid GAA Club are at the heart of the community and this funding will allow them to improve the club while also benefiting the local community.. The club plan to use the funding to upgrade their portacabins which upon completion can be used for indoor circuit training, meeting rooms and kitchen facilities. Over years gone by, the club have also dreamed of building a playground at their pitch for children while their parents are training or spectating and they will finally be able to realise this dream.

Speaking about the initiative, Ann- Marie Cox, Ulster Bank, Specialised Relationship Manager, said: “It was great to see another successful year for Ulster Bank GAA Force, with over 430 clubs entering the initiative. Getting appropriate funding for GAA clubs is not always easy – particularly in recent years. Ulster Bank GAA Force provides clubs with the opportunity to carry out necessary refurbishments while bringing their community together to get behind their local clubs. I am delighted that Kiltubrid GAA Club has been named as overall Ulster Bank GAA Force winner and I wish them every success in the future.”

The initiative was open to all GAA clubs, who were asked to submit their entries on Ulster Bank’s dedicated GAA website – www.ulsterbank.com/gaa. Entrants were asked to provide details of their club’s plans to make improvements, outline the role of the club in their locality and the benefits the makeover would have on the club, and the wider community. The first 100 clubs who registered also received a mini support package to the value of €100.