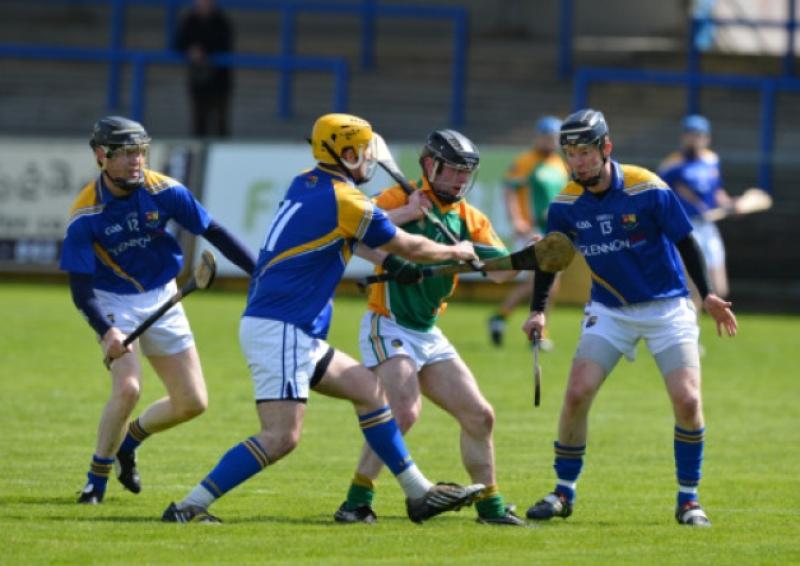 Any hopes Leitrim hurlers had of advancing in this year’s Lory Meagher Cup were ruthlessly dashed by a superior Longford side who held a 13 point lead at halftime of the second round encounter last Saturday in Glennon Brothers Pearse Park.

Any hopes Leitrim hurlers had of advancing in this year’s Lory Meagher Cup were ruthlessly dashed by a superior Longford side who held a 13 point lead at halftime of the second round encounter last Saturday in Glennon Brothers Pearse Park.

The home side, defeated in their first round game against Warwickshire, experienced little difficulty in overcoming the challenge of a poor Leitrim outfit and had the vital victory well wrapped up half-time.

Longford led 3-8 to 0-4 at the break with the goals coming from Joe O’Brien, John Minnock and Karl Murray in the full-forward-line as Leitrim struggled to cope with the absence of key players such as the suspended Zac Moradi.

Leitrim improved somewhat after the break but the damage was done at that stage and although they held Longford to five points, they were not able to make any headway into the home team’s massive lead.

The result will be a disappointment for Leitrim, particularly as they drew with Longford in the National League earlier in the year and it leaves them facing a daunting trip to Warwickshire to take on a home team who are still chasing a place in the competition’s final.

Longford face a crunch game against Fermanagh next Saturday if they are to book their place in the Lory Meagher Cup Final at Croke Park on June 8, Fermanagh needing just a draw after they finished all square with the Exiles last Saturday.

Longford captain Joe O’Brien and the equally prolific Eoin Donnellan led the charge last Saturday, scoring 1-9 between them and while Donnellan was sent-off with time almost up on Saturday last he was dismissed for a second yellow card offence and thus will be able to line-out against Fermanagh.

Donnellan fired over a total of seven points against Leitrim, five in the first half with four of those scores coming from frees, and the Rathcline man created the goal for Joe O’Brien who flicked the ball to the net in the 10th minute.

Two minutes earlier Longford got their opening goal when John Newman hit the target and the home side led by 2-4 to 0-0 at the end of the first quarter with O’Brien and Donnellan firing over a brace of points apiece.

Leitrim were in complete disarray with Longford determined to make amends for their disappointing defeat away to Warwickshire the previous week and the visitors had to wait until the 18th minute for their opening score - a free converted by midfielder Clement Cunniffe.

Further Leitrim points followed from Cunniffe (two frees) and Gary McGovern while Longford improved their already strong position in adding another 1-4 to their emphatic first half tally.

Leitrim suffered another setback when their centre-half-back David McGovern was sent-off for a second yellow card offence following a clash with Longford opponent Declan Tanner (who was also booked in this brief fracas) and a most uneventful second half developed into a dismal affair.

The best lethargic Longford could do was a couple of Eoin Donnellan points from play along with just two more scores through Connelly and Tanner (free) while substitute Paddy Glancy (free), Cunniffe (free) and Michael Dolan got consolation scores for Leitrim.