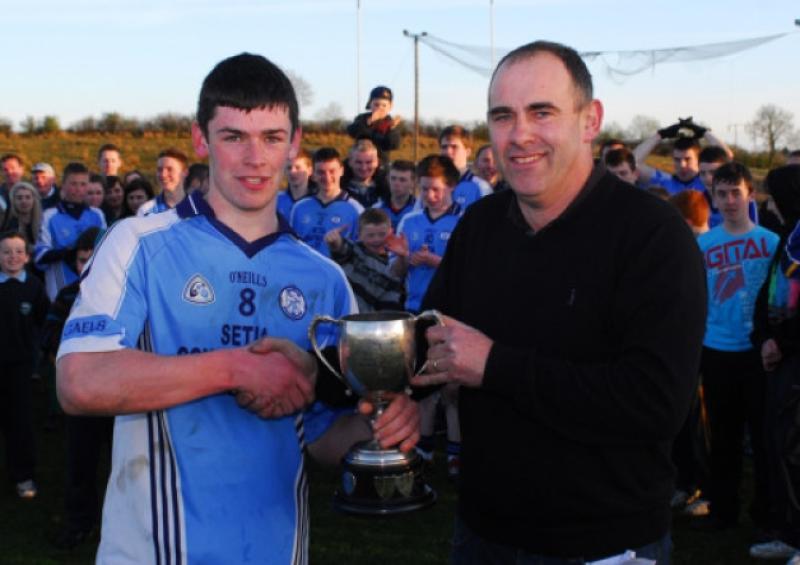 After a week of controversy regarding minor football the 13-a-side league final proved to be one to remember as St Francis produced an epic comeback to deny Garadice Gaels in Leitrim Gaels Community Field on Wednesday evening last as Diarmuid McKiernan successfully converted a penalty and a free in injury time to claim what had at half-time seemed an unlikely victory.

After a week of controversy regarding minor football the 13-a-side league final proved to be one to remember as St Francis produced an epic comeback to deny Garadice Gaels in Leitrim Gaels Community Field on Wednesday evening last as Diarmuid McKiernan successfully converted a penalty and a free in injury time to claim what had at half-time seemed an unlikely victory.

As a result of injuries to Mark Plunkett and Dylan Mimna the request was made to make the final 11-a-side and that was a request agreed to by St Francis and for much of the game Garadice Gaels coped very well without two significant players.

Conor Gaffney was excellent in attack while Declan Flanagan and Fergal McTague also played a crucial role in ensuring Garadice Gaels made full advantage of the wind that was at their backs in the opening half as they opened up an eight point lead. After a number of missed early chances Garadice Gaels deservedly took the lead in the fourth minute when the elusive Conor Gaffney pointed after good approach play from Declan Flanagan.

With St Francis struggling to make any impact on the game in the early stages Garadice Gaels duly doubled their lead when Gaffney’s free broke to Fergal McTague who slotted the ball between the uprights. From the resulting kick-out the lead was increased further as Declan Flanagan made a fine catch in midfield before driving forward and scoring the point his determination deserved.

Having failed to make any impact on the game up to that point St Francis scored their first point of the game when Diarmuid McKiernan converted but that was not to signal the beginning of a comeback from the Drumshanbo/Ballinaglera amalgamation as from the resulting kick-out Garadice Gaels pounced for the game’s opening goal.

Conor Gaffney latched on to a long ball out of defence from Pierce Nolan after an uncharacteristic mistake by Padraig Clarke who misjudged the bouncing ball allowing Gaffney a clear run on goal. Having left the defence in his wake Gaffney struck a fine shot past Kevin Moran to increase the Aughawillan/Drumreilly amalgamation’s lead to three points after eight minutes.

To their credit St Francis refused to throw in the towel and hit bit back quickly with points from Wayne Reynolds and John Crawford.

However, the final 10 minutes of the half (25 minutes a side) were entirely dominated by Garadice Gaels who looked eager to build up a commanding lead while they enjoyed the advantage of the wind. Michael Prior’s point was quickly followed by three Conor Gaffney converted frees and on the stroke of half-time Gaffney scored an excellent individual point, under intense pressure, to give his side a commanding 1-8 to 0-3 half-time lead.

Considering how dangerous Garadice Gaels looked when attacking during the opening half it was difficult to see them surrendering an eight point lead but as the second half progressed St Francis came more and more to the fore before those final dramatic moments which saw them go in front for the first time with what proved to be the final attack of the game.

Shane Walsh reduced the deficit ever so slightly with the first score of the second half and that was followed by a Diarmuid McKiernan free but with six points still between the sides and just 15 minutes remaining it still looked promising from a Garadice Gaels point of view. That feeling was further enhanced when Garadice Gaels goalkeeper Darragh McNiff made an outstanding save to deny McKiernan who was presented with an excellent opportunity after clever link-up play involving Niall Sorohan and Wayne Reynolds.

As the half continued it was evident that Garadice Gaels were focusing more on containment rather than trying to extend their lead while a further Diarmuid McKiernan free saw St Francis narrow the deficit to five points with 10 minutes of the game remaining.

With Pierce Dolan and Killian Lavin playing very well in defence it still looked as though Garadice Gaels were in a commanding position but two points in as many minutes from Wayne Reynolds and Diarmuid McKiernan meant with eight minutes remaining all that separated the sides was a goal.

In a bid to halt the momentum Gaffney was brought to midfield and this did help Garadice Gaels ease the pressure. Crucially when chances came their way the St Francis defence ensured Rory McTague’s shot was struck under severe pressure and went harmlessly wide while the normally reliable Conor Gaffney saw nerves get the better of him as he saw a free go harmlessly wide.

The second half had been very stop-start affair with referee Michael Clancy issuing seven yellow cards while there was also a delay while St Francis’ Alan McTigue received treatment and those stoppages meant it was obvious there would be a considerable period of injury time.

In the sixth minute of injury time St Francis were awarded a penalty which Diarmuid McKiernan dispatched with real authority meaning the sides were now level. With the momentum and the wind at their backs St Francis launched one final attack resulting in Diarmuid McKiernan being fouled by Rory McTague who was subsequently issued with his second yellow card. McKiernan took responsibility for the free and from the moment it left his boot it was evident it was going to sail over the bar.

That proved to be the last significant action of the game as the celebrations began for the St Francis players while the Garadice players were left to wonder how they had managed to lose such a commanding lead but with a fully fit team they will be a force come championship time.