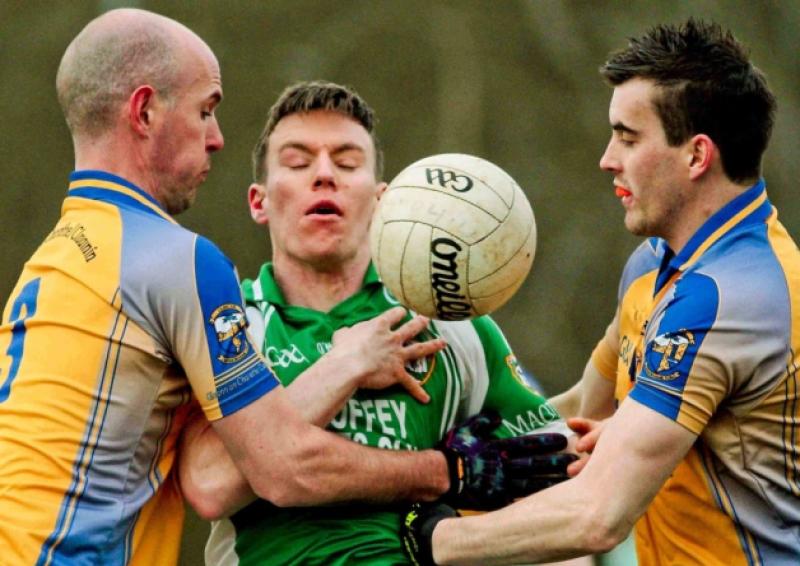 County Champions Aughawillan, League winners Glencar/Manorhamilton and 2014 Intermediate champions St. Patrick’s Dromahair continued their winning ways of last year with wins in the first Division One fixtures of the year.

Champions Aughawillan are obviously determined to prove their success last year was no one-off as they accounted for Gortletteragh by nine points, two first half goals proving the difference as the Willies built up an unassailable 2-8 to 0-3 halftime lead.

Gortletteragh, defeated by Aughawillan in last year’s Quarter-Finals, put in a much better second half but could only close the gap by two points in a serious statement of intent from the Champs.

St. Patrick’s Dromahair also showed their intent when they had nine points to spare over 2014 County Finalists St. Mary’s Kiltoghert. The Carrick men have been slow to start in previous years but they will be worried at the 1-15 to 1-6 margin of victory by the Damien Eames led Dromahair men.

The clash of the weekend saw Glenn Young return to the helm in Glencar/Manorhamilton and it proved a winning return, but only just as the north Leitrim men had a point to spare over Mohill, 0-11 to 0-10. A youthful Mohill trailed badly in the first half but fought back and can consider themselves unlucky not to draw with Padraig Tighe scoring four points and Alan McLoughlin three.

Former County star James Glancy was dismissed on a straight red card but Manor featured a returned Paddy Maguire which is sure to strengthen their challenge to reclaim the Fenagh Cup with Ronan Flynn, Adrian Croal and Conor Dolan all scoring three points apiece.

Aughnasheelin also had a good start to the campaign as they had seven points to spare over Carrigallen, 1-13 to 1-6 while Allen Gaels marked their return to Division One with a three point victory over Ballinamore Sean O’Heslin’s 1-9 to 0-9, Alan Wynne scoring the decisive goal.

The game, however, was held up for a time after an incident when a Ballinamore player was dismissed but when play resumed Allen Gaels saw out the game with Nicholas Moore leading the way with a fine display of free-taking.

Drumkeerin made the most of the wind in the first half to build up a match winning lead in Kinlough as they prevailed 1-7 to 1-6 against Melvin Gaels. In a game where both teams deployed defensive systems, a Michael Ferguson goal sparked a Gaels fight-back but they fell short despite a few late attempts.

In Division 2, Glenfarne/Kiltyclogher scored a quite astounding 7-17 to 1-11 victory over an understrength Gortletteragh in Blacklion. With seven Gortletteragh players in action for their Senior team the day before, Glenfarne ran riot with County star Fergal Clancy scoring 2-6 while Paddy Kilkenny weighed in with 3-2.

The 24 point winning margin is a huge advantage for Glenfarne/Kilty when it comes to scoring differences at the end of the year with nine points the next biggest margin of victory in the Division.

That victory came when Annaduff, relegated to the second tier last year, easily accounted for Kiltubrid 2-11 to 0-8. Incredibly, Kiltubrid raced into an early six points to nil lead after just eight minutes but Annaduff, back under former manager Michael Moyles, outscored their rivals by 2-11 to 0-2 for the rest of the game.

Drumreilly had five points to spare over Bornacoola, 1-11 to 0-7, in Dromod on Sunday while Cloone got the better of their neighbours Fenagh St. Caillin’s in a high scoring encounter, prevailing by a goal on a scoreline of 3-10 to 2-10.