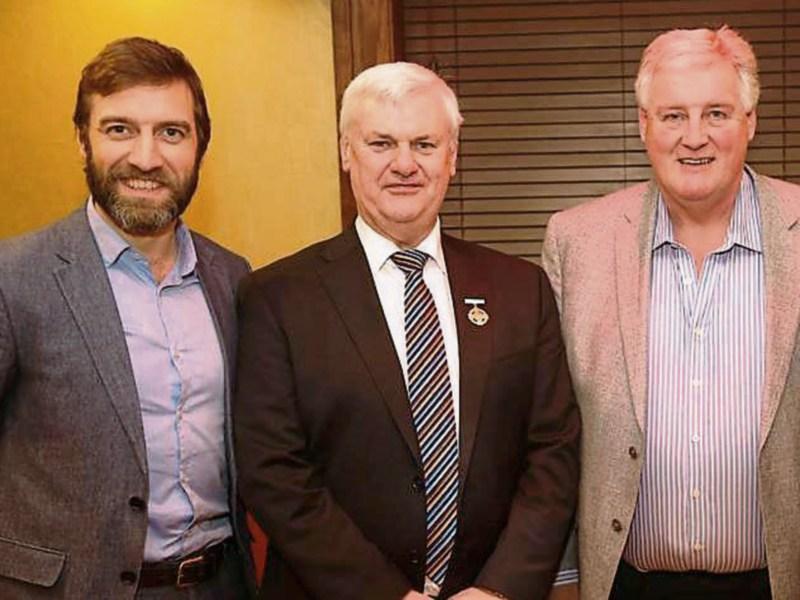 I was picked up at Heathrow airport bright and early on Friday morning by a Donegal man I had spoken to only once, on the phone, before. By the end of our journey to the Clayton Crowne Hotel in Cricklewood we had identified so many life and sporting connections that we might as well have been family. I suppose, in terms of the GAA fraternity, we are.

It transpired that, amongst many other things, Seamus and my brother Barbour were team mates and friends for many years in London throughout the ‘80s, both proud members of the Tir Chonaill Gaels team.

In fact, at the age of nine, I had watched them both play when the London club travelled to Donegal town for a tournament in 1984 that also featured New York. Jon Rynne, another Melvin Gaels man, played most of his career with the London ‘Gaels’, the club of choice for Donegalians and north Leitrimites who crossed the water in search of work in those days. Their current senior manager is none other than our own Barney Breen.

The most common refrain I heard over the weekend from those who knew them was ‘Jon and Barbour, two of the hardest men that ever played for the Gaels.’ And hard wasn’t a euphemism for dirty. They may have been steel cutters, but they were also cut from steel.

I was visiting London to attend the British GAA convention on Saturday, to which I was invited to make a presentation on health and wellbeing, its place and its potential in the GAA.

I also joined a delegation from the British Provincial board that attended the British Embassy on Friday morning for a briefing with the Ambassador Dan Mulhall and an umbrella group called ‘Irish in Britain’ that aims to support the cultural, economic, and health and wellbeing needs of our ex-pat population in the UK. The immense work that the GAA does in this space was highlighted and acknowledged while additional potential opportunities were also identified.

Between the years of 2009-2013, some 246 Irish people in the UK took their own lives, a significant percentage over the age of 55, a sad and shocking statistic that must be addressed.

Seamus Carr is London’s Central Council delegate for the GAA and hence the reason he kindly offered to pick me up from the airport. He was mightily impressed by the numbers we had at the Leitrim Supporters Club event in Croke Park the night before.

The buzz from the gathering and my pending 7am flight meant I that my ‘ruffled mind made a restless pillow’ but the lasting feel-good factor provided more pep in my-step than any expresso could .

Seamus has more than a passing interest in the affairs of Leitrim. His mother Kathleen McGloin (or Cassie or Kay as she was affectionately known) hailed from Dartry, and worked in Renison’s shop in Kinlough. That also makes him a first cousin of our former county councillor, Enda McGloin, from Drumshanbo. Seamus’ father, Frank, taught in Glenfarne and was Leitrim County Secretary before returning to his native Donegal.

Leitrim popped up time and again over the weekend and the connections continued. John Gormley, from Cloone, was amongst the GAA delegation to attend the Irish Embassy. Current vice chairman and former player with the St Dymphna’s club, Luton, our chat revealed that he was good friends with another brother of mine, Davy, when he lived and there in the ‘80s. John, who is responsible for the hugely successful and now annual All British Competition (ABC) for juveniles, also knew the late Peter Feeley from Glenfarne, a former Melvin Gaels team mate of my own, and sadly missed by all.

During prayers for the deceased at mass following the convention (always a novel experience for a Protestant), Fr Eugene McGillycuddy, a tower Kerryman that takes more than just his name from his local mountains, asked for ‘Charlie Byrne, a great Leitrim man’ to be remembered.

Quizzing him afterwards, Fr Eugene lovingly described him as the ‘greatest rogue he had ever met’ and one of the most decent people to walk the planet.

Finally, I literally bumped in John Gilmartin of Drumshanbo, in the Crowne Hotel, as he made some final preparations for the Leitrim Association of London 50th anniversary dinner dance on Saturday, March 5, which promises to be a memorable occasion.

With so many life connections firing new synaptic connections in my brain, I headed for home on Sunday with An Uachtarán CLG, Aogán Ó Fearghail, happy that there would be no shortage of material for the Observer this week.

Upon arriving home, I learned of the near-death experience of Leitrim U21 Alan McTague, one of the county’s most promising young stars, and I thanked all the other stars (the medical teams from both counties, the Rathcline GAA Club officers for the foresight of having a working defibrillator on site, Roscommon GAA, the Irish Air Corp and the National Ambulance Service) for their care of the Drumshanbo footballer. Here wishing you a full and speedy recovery Alan.