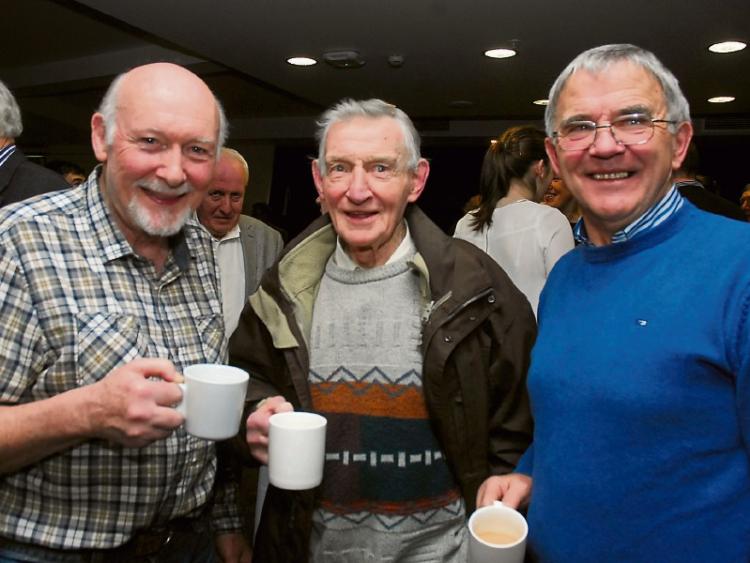 It might have be over 30 years in existence but the Leitrim Supporters Club is still going very strong if the enthusiasm on show in Croke Park last Thursday evening is anything to go by.

The main aim of the Leitrim Supporters Club is to raise much needed funds for the county’s football teams but the night has evolved into a celebration of all things Leitrim as the presence of legendary fiddler Ben Lennon illustrated all too clearly.

An illuminating interview with Colin Regan gave some insight into the warmth and humour of the Kiltyclogher native and was just as enjoyable as the presence of Westmeath All-Star Dessie Dolan Junior.

The RTE pundit spoke glowingly of the place Leitrim has in the GAA world and of the ambitions the smaller counties must have and the support they need while stressing that the Green & Gold must aim for a provincial title.

The humour, warmth and entertainment of the second half of the event that featured Dolan and Lennon was preceded by the more serious business of promoting the Leitrim Supporters Club and lot of opinions on what Leitrim must do to reach the promised land of a Connacht title.

Leitrim GAA County Board Chairman Terence Boyle said that the Supporters Club had lost none of its vigour and it was fantastic to see people come year in, year out to the launch to support Leitrim - “I do believe we are making huge strides forward, all our underage squads are very competitive.”

Long time Supporters Club member and former Leitrim captain Joe Layden spoke of his ideas of seeking additional funding from Croke Park to fund a new coaching initiative for players as young as the age of six, promoting the basic skills of the game to give our county teams a greater chance of success.

“We have got to get skills coaching from an early age and it has got to be funded by Croke Park and it is not just us in Leitrim who needs this. Gaelic football is not like hurling or golf where a large amount is due to natural ability but we have got to get our basic coaching at a level where it is not at now.”

Revealing how he had written to GAA President Aogan O’Fearghail outlining his proposals, Joe said “His reaction was considered, not negative but it will take a truckload of money to do it properly but that is the long term plan.”

Joe also said that in the short term, Leitrim must aim for promotion from Division 4 and a Connacht title in 2016. He agreed it was a tall order but added “we have the potential to bring a Connacht Championship back to Carrick-on-Shannon.

“It will cost money and it will be done collaboratively with Shane Ward and I am sure you supporters will never to be found wanting. We have got to get the skills levels up and if it takes a specialist coach working in conjunction with Shane Ward, we will assist in that direction.”

Joe suggested that a scheme be set up where individuals and businesses are invited to contribute to Leitrim football but he stressed that the driving force must come from the clubs of the county, approaching local people to support Leitrim teams.

Leitrim Senior manager Shane Ward also gave a detailed briefing on the development of the team as he stressed “Your team, your county and your players are in safe hands. It is a long term process but we are learning and learning fast.

“We have made huge strides on and off the field but the quality of player coming through is much higher each year and we are building a quality player approach.”