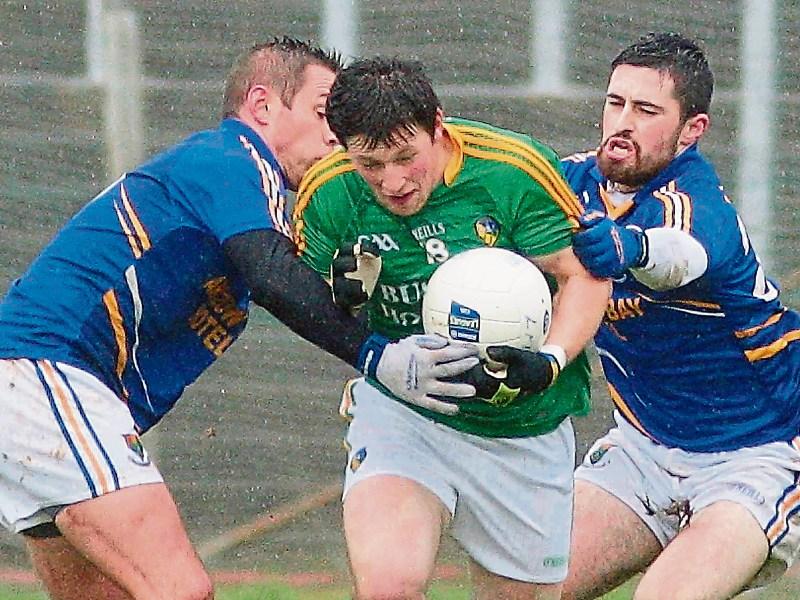 Leitrim needed a win to reignite their promotion campaign but were left chasing shadows in the first half as, backed by a gale force wind, Wicklow raced into a nine point lead, leaving the Green & Gold all at sea.

Leitrim had the wind at their backs in the second half but never managed to build up the momentum needed to threaten Wicklow's lead.

Wicklow, with a young team with five U21 players, managed to do what Leitrim failed to do last year, hold onto a nine point lead but it was close. An Emlyn Mulligan penalty over six minutes into added time raised the prospect of an unlikely draw but Leitrim couldn't convert as Wicklow held on for a convincing win, despite the final scoreline.

Leitrim now need to win their remaining five games and hope that Louth, Antrim & Wicklow all drop points but the Green & Gold are already well behind the eight-ball in this race. It would take an unlikely turn of events for Leitrim to get back in the promotion race but they lost both games by just one point, the first in controversial circumstances and such are the small margins between success and failure.

Nobody, however, would say it was a good display - Leitrim looked beset by nerves and indecision in the first half against the wind and they never generated the momentum they needed to get back into the game during the second half.

Leitrim showed far more intensity during the second half and there were chances that could have closed the gap, some bad wides that, in theory, would have made all the difference but the Green & Gold were never truly convincing.

It will be a performance that will take some time to purge from the minds of the players as they simply didn't perform against a team they were confident of beating.

Wicklow had the first attempt at a score but keeper Brendan Flynn punched the ball clear but a Niall Woods foul in the corner saw John McGrath point from a very tight angle. From the kickout, Wicklow regained possession and Darren Hayden dummied a defender before chipping over.

Anthony McLoughlin was fouled although he appeared to take a few too many steps and McGrath converted before Hayden scored a huge point from the right wing, leaving them four points up after less than six minutes.

A shocked Leitrim tried to work an opportunity but over-played the ball, Emlyn Mulligan handling the ball on the ground as Wicklow missed chances before McLoughlin sauntered through the middle, Mark Kenny scoring with ease.

Three minutes later, Rory Finn thumped a 45 yard free on the right wing over the bar and, from the kickout, Wicklow found Finn who pointed from 40 yards out on the left.

Shane Quinn kicked a wide on a rare Leitrim attack but Wicklow again cut through the middle with Eddie Doyle pointing on 20 minutes before Adrian Croal saw a good chance blocked when he dallied just a fraction too long on the ball.

Like Leitrim 12 months ago in Aughrim, Wicklow scored a ninth unanswered point by the 25th minute when Kenny raked a long range 45 yard effort just inside the post.

Leitrim kept trying, a long ball getting knocked down by James McGrail but it just evaded the boot of Emlyn Mulligan while Kevin Conlan put a free badly wide. Wicklow keeper Robert Lambert blocked a shot from Croal after McGrail fisted a wayward Mulligan shot back across the goal.

Leitrim finally opened their account after 30 minutes, Nevin O’Donnell’s successful free prompting relieved cheers from the Leitrim fans but it could have been much more a minute later when Leitrim created a golden goal chance.

Ciaran Gilheany got in behind the defence but from a tight angle, he drove his shot wide past the right hand post. O’Donnell had two missed chances while Darren Sweeney also dropped a shot short as Wicklow led 0-9 to 0-1 at the halftime break.

Leitrim needed to do in the second half what Wicklow had done in the first and when James Rooney, on as a sub after 20 minutes for Shane Quinn, burst through to fire a great shot over the bar, it looked as if Leitrim were on a mission.

Five minutes later, Michael McWeeney launched a long ball to clubmate James McGrail who turned sharply to hook the ball over the bar but the scores weren’t coming fast enough.

Emlyn Mulligan put a 50 yard free wide, Nevin O’Donnell did the same from 55 yards and Adrian Croal had a very bad effort while Lambert did well to bat out a Mulligan shot that dropped just under the crossbar with Croal in on top of him, the slightest touch or step back would have meant a goal.

Time was Leitrim’s enemy and it took the defence again to provide a score, Niall Woods blasting over from long range after 18 minutes. Nevin O’Donnell added a free two minutes later and the sense that momentum was finally building came with a soft enough free, converted by Mulligan.

That left three points between the teams with 13 minutes left but Wicklow started to work the ball out of defence and while scores didn’t come, it ate up precious time.

They did get a huge score when sub Niall Gaffney scored a good point, Wicklow’s sole point of the second half with less than seven minutes to go.

Conor Gaffney replied with a bad Leitrim wide as time was running out. Leitrim ended the game with 14 men as, with all six subs on, Niall Woods had to be taken off with a suspected break in the arm.

Moran was taken down by a high challenge and after a bout of pushing and shoving ended, Mulligan calmly stroked the ball to the net.

It gave Leitrim a glimmer for an unlikely draw - Wicklow played the ball short but couldn’t clear their lines but they held their formation and despite Leitrim working the ball over and back, a desperate long range shot from Micheal McWeeney ended up wide as Leitrim suffered defeat.