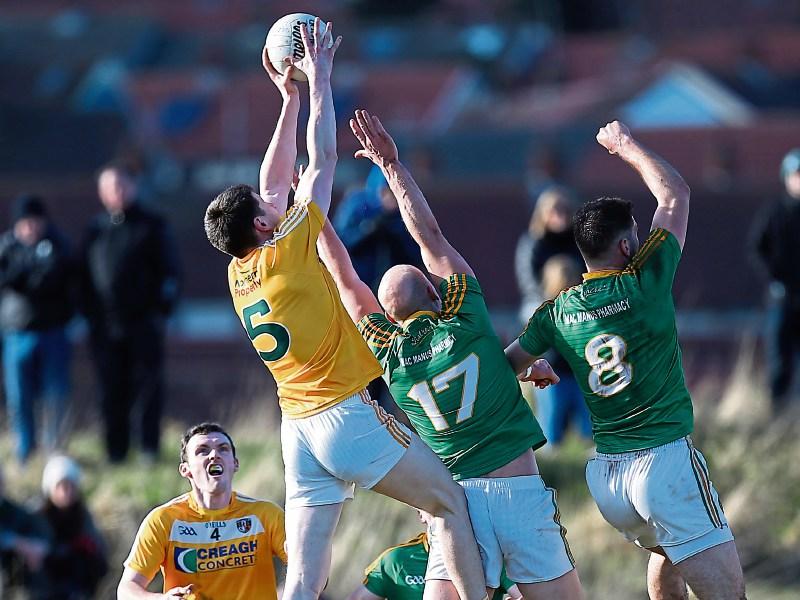 They have been at the opposite ends of the country but both the Leitrim Men's and Ladies Senior teams saw their League hopes take a heavy blow last Sunday.

The Senior men's team travelled to Corrigan Park in Belfast knowing that a win was a must if the Allianz League Division 4 campaign was to be reignited. And it seemed for the first 30 minutes as if Shane Ward's team were on the way to a famous victory.

Playing direct football and upsetting the favourites, Leitrim led by four points, 0-6 to 0-2, and forced the Antrim keeper to bring off a vital save to prevent James McGrail from goaling.

Unfortunately, Antrim found their feet when Tomas McCann pounced for a goal just before halftime, two further frees actually giving the home side a one point advantage at the halftime interval.

Unfortunately, Antrim dominated the second half as they scored a further 1-8 to Leitrim's four points, a chipped goal from sub Brian Neeson doing further damage to Leitrim's scoring averages.

Next Sunday sees joint table topper Louth come to Pairc Sean Mac Diarmada for the fourth outing and apart from the precious League points, Leitrim will be looking to avenge their eight point loss to the Wee county in last year's Qualifiers.

However, Louth look in top form as they ended Wicklow's unbeaten run last weekend, scoring an impressive 0-15 to 1-2 victory over the Garden county.

Antrim and Louth top the table on six points with Wexford and Wicklow just behind on four points each. Leitrim are ranked seventh, level with London on no points.

At the other end of the country, Leitrim Ladies suffered their second defeat in the Lidl Ladies NFL Division 3 campaign, losing out to table toppers and All-Ireland Intermediate champions Waterford by 4-13 to 3-3.

Incredibly given the final scoreline, Leitrim actually led at halftime by one point, 2-3 to 1-5, after goals from Emma Guckian and Aine Tighe had kept them in touch with the home side.

However, the home team turned on the style in the second half, scoring 3-8 to Leitrim's solitary goal from Aine Tighe to take control of the Division and leaving Leitrim with a massive fight to make the League semi-finals.

The Ladies face Offaly next Sunday in Ballinamore in a game where they need to get back on the winning trail.

Next Sunday also sees the county hurlers make their first appearance in the Allianz National Hurling League when they make the short journey to Glennon Brothers Pearse Park to face neighbours Longford in the Division 3B clash.

With Fermanagh and Sligo also in the Division, it promises to be a hectic schedule for the hurlers who are looking to build on their recent Connacht Hurling League success. They face Sligo and Fermanagh at home over the next two weeks with the League Final at the end of the month.