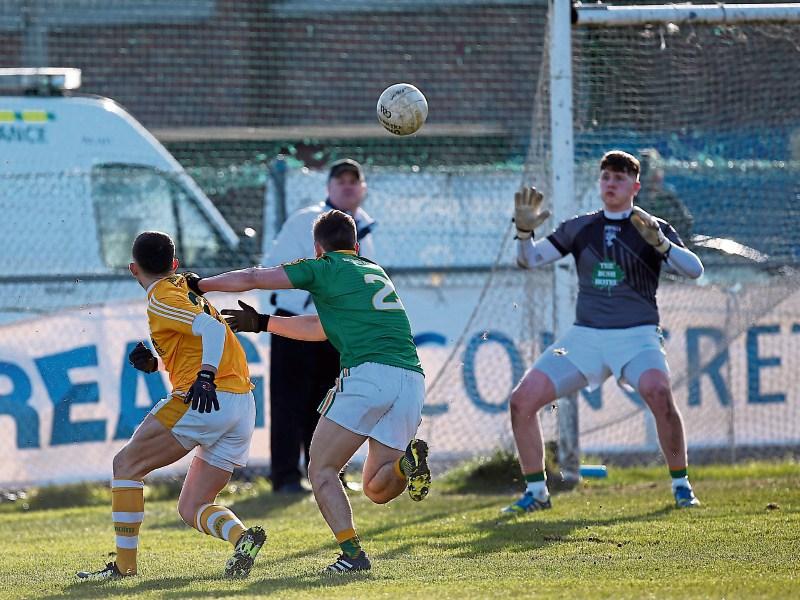 Any lingering hopes that Leitrim might still mount a challenge for promotion in the Allianz League Division 4 were crushed last Sunday in Corrigan Park, Belfast.

Antrim kept their promotion hopes firmly on course with a comprehensive 10-point win but it was a result that was slightly flattering and hinged on Antrim's two goals.

A goal from Tomas McCann late in the first half turned the game in Antrim’s favour after Shane Ward's team bossed the opening stages, leading by four points and causing the Division pace-setters a huge amount of problems.

Leitrim’s failure to score from play proved their undoing and Brian 'Bam' Neeson rounded off a pleasing afternoon’s work for the Saffrons with a sublime lobbed goal in injury-time, a score that put quite a gloss on the scoreline.

Leitrim also made a host of changes with Mohill duo Ronan Gallagher and Ronan Kennedy, Glencar/Manorhamilton's James Rooney and St. Mary's James McGrail all drafted into the starting 15 in place of Matthew Murphy, Nevin O’Donnell, Adrian Coal and Thomas Mulvey.

It was the first start of the campaign for Gallagher and Kennedy with Murphy, Croal and Barry Prior all seeing action as second half subs, two of which were enforced as Leitrim lost Niall Woods, expected to miss the game after his injury against Wicklow, and Sean McWeeney to black cards against Antrim.

Despite the facile nature of the win, which leaves Antrim in pole position to clinch promotion after three rounds, Antrim joint-manager Gearoid Adams insisted his side have plenty to work on as they stand top of the table with Louth.

Leitrim are still looking for their first points of the campaign when they host table topping Louth in Pairc Sean next Sunday, a tough proposition considering the Wee county had ten points to spare over Wicklow last Sunday.

Antrim were without Cargin’s Michael McCann and Justin Crozier after the pair were ruled out with hamstring injuries before the game and the home team were slow out of the traps and were repeatedly turned over in the final third in the early stages due to immense Leitrim pressure.

Early frees from Emlyn Mulligan (2), Ronan Kennedy and a ‘45 from Kevin Conlan had the Green & Gold 0-4 to 0-1 ahead after a lacklustre 20 minutes with Niall McKeever scoring Antrim’s first point.

Kevin Niblock’s point on 22 minutes came against the run of play as Leitrim’s direct approach caused the Saffrons plenty of problems.

When they reflect on the game, Leitrim will point to Antrim keeper Chris Kerr somehow managing to stop James McGrail from palming the ball into the net but Conlan landed the resulting ‘45 and another Mulligan free had Leitrim 0-6 to 0-2 ahead and in a great position.

That save was magnified in importance when the pivotal moment of the game arrived on the half-hour mark when substitute Niall Delargy dispossessed Ciaran Gilheany. The Saffrons followed Leitrim’s lead and went direct and Sean Burke spotted the run of Tomas McCann and the Cargin ace slotted the ball past Brendan Flynn to cut the gap to a point.

McCann then hit two late frees to give Antrim a slender one-point lead at the break, 1-4 to 0-6 at the break and as the sides made their way to the changing rooms, Leitrim must have been wondering how they were behind after holding the upper hand for the majority of the opening 35 minutes.

In truth, Shane Ward’s side never recovered from the concession of that goal and Antrim puled clear in a one-sided second half.

Leitrim’s woes were compounded by black cards to full-back Niall Woods and wing-back Sean McWeeney while Mulligan’s free-taking prowess kept his side in the contest. Yet Leitrim rarely threatened from play and when they did, they were forced into ambitious efforts from distance.

Conor Burke kept tabs on Mulligan throughout while James Laverty made a series of great interceptions throughout the game. At the other end, McCann matched Mulligan’s exploits as Antrim stretched their advantage to five midway through the half.

The lead might have greater but for an excellent save by Flynn who denied Conor Murray a certain goal. The Leitrim keeper was called into action again moments later when he also denied Laverty from breaching his goal.

Woods then received the game’s first black card after taking out McCann off the ball. He was joined on the sideline less than five minutes later by fellow defender Sean McWeeney. His trip on Ryan Murray was deemed deliberate by referee Niall Cullen and McCann slotted over the free to leave Antrim six ahead with 10 minutes remaining.

With time almost up, the Antrim management introduced Neeson for a late cameo and the St John’s clubman made an impression on his home turf.

Cullen played more than five minutes injury-time and Antrim used the added time to add a touch of gloss to the scoreboard.

Conor Murray’s cross-field pass was well taken by Neeson who turned and proceeded to lob the ball over Flynn’s head and into the net off the underside of the crossbar from the six-yard box.

Neeson’s finish highlights a new-found confidence in the Antrim ranks and their fate is very much in their own hands after three rounds.