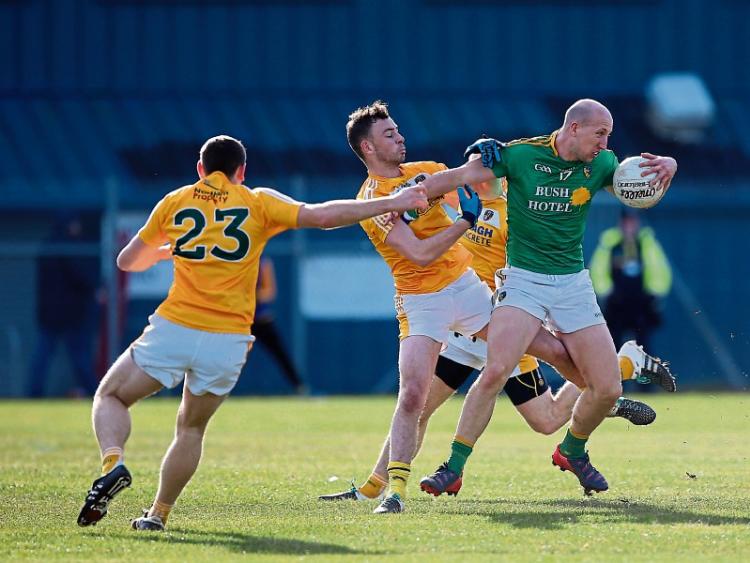 With the Leitrim management unavailable to talk to the media after the match in Corrigan Park, members of the press waiting for half an hour after the game, it was left to Antrim’s joint-manager Gearoid Adams to analyse the game.

And while the Saffrons boss felt that the final scoreline flattered his team a little, Adams said Antrim did not start the game well - “We weren’t happy with the first 20 minutes.

“I think maybe the wee bit of publicity they’ve been getting in the run up had been getting to their heads for that short period of time but the 1-2 we got in the last 10 minutes seemed to spur us on.

“We got in at halftime and organised ourselves and pushed on from there. We warned the boys that they had nothing to lose. They had lost two games by a point and they were going to push us all the way.

“Leitrim pushed up on our system and put us under a lot of pressure and in the first 20 minutes, we didn’t react the right way but the bit of class that Tomás (McCann) showed for his finish in the first half gave us the confidence that we needed.”

Adams added “Bam Neeson’s chip there towards the end with five or six minutes to go, it maybe flattered the scoreline but we’re working and we’re working hard.

“We kept them scoreless from play so we’re giving teams a hard time in our defence. We’ll look at the positives and work on our start for the next day.”

Antrim’s next two fixtures sees them taking on London (away) and Waterford (home) – games which the Saffrons will be expected to claim maximum points from.

However, Adams stressed that the Division Four leaders will be keeping their feet firmly on the ground in the coming weeks as they bid to clinch promotion after unsuccessful attempts in 2014 and 2015.

“You seen what happened there in the first 20 minutes when we went out with our heads not right and we warned them about that before the match even started. We play London next week. Wexford gave them a hiding there today (Sunday) but that means nothing.

“We’ll respect every team we play and we learned that from that match.

“On a positive, we’ve had two lulls in the second half in the last two games for about 10 minutes. We didn’t have that today. I thought we controlled the second half from start to finish which was good,” said Adams.