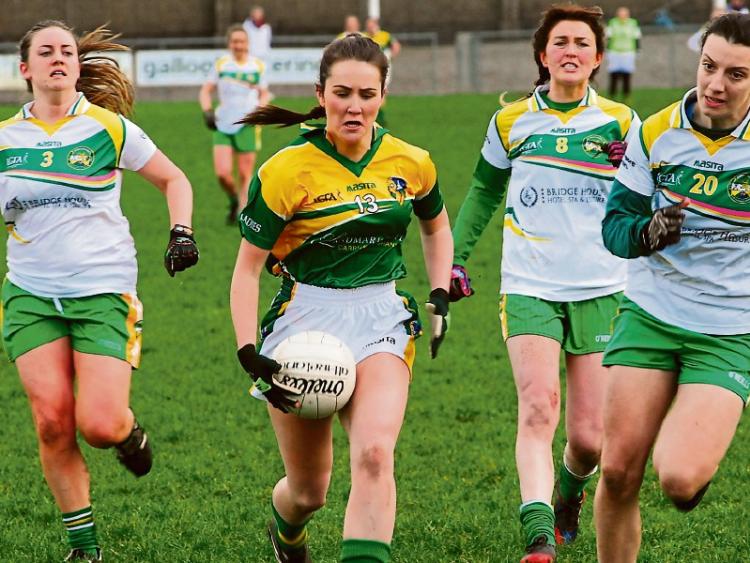 Despite the worst start imaginable, Leitrim Ladies regrouped well last Sunday to record a comprehensive victory over Offaly in Ballinamore to get their League campaign back on track.

Two Offaly goals inside the first three minutes from Mairead Daly and Lorraine Keena suggested Leitrim could be facing a third successive defeat but they showed great resolve to bounce back.

Once Leitrim got going they were fluid in attack with the likes of Ailish O'Dowd, Michelle Guckian, Roisin Fowley and the Heslin sisters, all to the fore but they vulnerable at the back.

They opened their account in the seventh minute when Michelle Guckian floated a dangerous ball goalwards. Aine Tighe anticipated where it would drop and she got a telling touch before it the goalkeeper to deflect the ball to the goal.

A minute later Rosin Fowley scored the first point of the game and then the Heslin sisters combined for Leitrim's second goal of the game.

Despite her jersey being dragged by a defender, Michelle Heslin carved her way through the defence before releasing her sister Aine who shot to the roof of the Offaly net to wipe out Offaly's early lead.

The Leitrim lead was extended to two points when Deirdre Ward released Michelle Heslin who pointed comfortably. Having worked so hard to gain the lead Leitrim will have been frustrated to say the least by the manner in which they relinquished their advantage in the 18th minute.

Once again a simple ball over the full-back line towards Holly Ravenhill left the Leitrim defence flat footed as the run wasn't tracked and the Offaly forward dispatched her shot past Michelle Monaghan.

The green flag was barely put down when Leitrim replied with a goal of their own from Michelle Heslin to give Leitrim a two point advantage. With four minutes of the half remaining, the sides were level once more before Michelle Guckian's shot from distance looped under the Offaly crossbar and into the net to regain the lead for Leitrim.

Keena & Roisin Fowley both pointed before the interval meaning Leitrim led at the end of an entertaining half 4-6 to 3-6. While there was much to be impressed with from Leitrim as an attacking force during the opening 30 minutes, the defensive display was certainly below par and they looked to rectify that for the second half.

Mary Farrell brought more stability to the defence after the break while experienced duo Claire Owens and Deirdre Ward also helped to keep the faithful county at bay.

Despite Leitrim being more defensively sound it was Offaly who registered the first score of the second half with a Mairead Daly point.

That was cancelled out by a Michelle Guckian point and moments later she turned provider for Aine Tighe who was on hand to score Leitrim's fifth goal of the afternoon.

Michelle Heslin came agonisingly close to the score of the day when she won possession of the resulting kickout but her attempted lob of the Offaly goalkeeper was just wide.

Midway through the half Aine Tighe found the Offaly net once more after good play from Roisin Fowley and shortly afterwards Michelle Heslin pointed once more to leave Leitrim in a commanding position as they led 6-8 to 3-8.

The remainder of the game proved to be a formality for Leitrim as the Offaly challenge faded during the final quarter.

Aine Tighe registered Leitrim's seventh goal of the afternoon with 12 minutes remaining and although Mairead Daly registered a late goal for Offaly this proved, in the end, to be a convincing win for Leitrim.