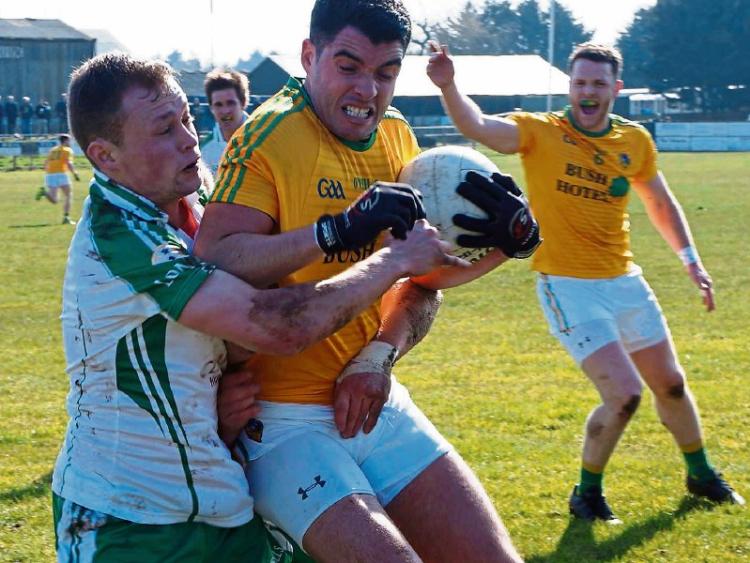 Leitrim picked up an expected win in Ruislip last Sunday but were still made to work harder than they might have expected.

A London goal in the first quarter threatened a shock result but Leitrim reacted positively and an unanswered 1-8 put Leitrim on course for their second win of the campaign in Ruislip.

Results elsewhere mean that the prospect of promotion officially ended last weekend with Antrim six points ahead with two games to go and the Ulster men holding the head to head advantage.

Wexford & Louth are four points clear but face each other in the next game and any result in that game will end Leitrim's mathematical chance of catching anyone.

London took the game to Leitrim in spells but a lack of concentration and intensity at times allowed Leitrim to claim the spoils as the Green & Gold held the home side scoreless for 24 minutes.

Leitrim opened the scoring in the first minute as Shane Moran was granted enough space to run at the London defence from midfield and put his subsequent effort over the bar.

London regained possession from the kick out and with Mulvey dropping back to link up with Liam Gavaghan, they took their time to reply when put under pressure from Leitrim's rearguard. Adrian Moyles’ run opened space for Eoin Murray to set up Dean Moore’s equaliser in the second minute.

Two minutes later, Cathal Og Greene and Mulvey worked well together to set up Scott Conroy’s point to take the hosts ahead. But Leitrim would again respond within a minute in a lively opening period through full forward Ronan Kennedy.

Emlyn Mulligan and Nevin O’Donnell would team up for their side’s next move but Tir Chonaill Gaels’ Philip Butler was on hand to clear the ball away to safety.

Mark Gottsche created London’s next chance as he ran in from the right wing to put a dangerous ball across goal but Murray was unable to connect with the pass to put it beyond Brendan Flynn.

Emlyn Mulligan got his second point immediately afterwards but the free-flowing football was soon put to a halt after two black cards. The first was for O’Donnell after a foul on Conor O’Neill and once play resumed, Mulvey also had to leave the pitch for a late challenge on Gallagher.

It was a blow to the hosts as the Cavan native had been effective in working the ball around the half-forward line.

After a disjointed few minutes, Moore took it upon himself to create the next chance, setting up Conroy who ran at goal but settled for the point as he placed the ball above the reach of Flynn.

Conroy then set up Adrian Moyles for a simple chance to go ahead with the St Kiernan’s player grabbing the chance with ease in acres of space in front of goal. Their lead was extended as Gottsche’s accurate pass to Gavaghan dissected the Leitrim half-back line and his Tir Chonaill Gaels clubmate used his strength to hold off two defenders to emerge in front of goal.

As he kept running, Flynn made himself big between the posts and it looked like a point was his only scoring opportunity but the London man managed to find enough range at speed to lob the keeper and give his side a four point lead.

Leitrim looked in trouble but the score seemed to provoke the visitors into finding their best form and Leitrim responded with Moran grabbing a point from the right wing.

London began to waste opportunities now as Murray’s ball into his forwards was picked up by a yellow jersey straight away, allowing James Rooney enough scope to send a sensational diagonal ball into Kevin Conlan to close the gap to just two.

Moore would shoot the next wide for London before Moran set-up Kennedy for the next point. The hosts were let off again when Mulligan missed a scoreable free after Danny Ryan fouled Moran after losing a high ball battle.

Paddy Maguire would make amends immediately afterwards as his shot reclaimed the lead for his side, and Ciaran Gilheany’s next attempt gifted them a two-point cushion soon afterwards.

At this stage, it had been quite some time since London had even gone into Leitrim’s half, until Gavaghan set up Murray but to the hosts’ frustration, the shot went wide.

London had a let off when Cormac Coyne scrambled back to clear Gilheany’s goal shot but Leitrim continued to rack up scored through a Mulligan free and a powerful boot over from Kennedy.

As the half-time drew to a close, Leitrim stood four points ahead with London scoreless for 24 minutes, conceding a total of eight points in that time, a period that effectively won the game for the visitors. It would get worse from the restart as Rooney won possession in the opening minute, and Conlan showed no hesitation from his pass to shoot across goal and beyond the reach of the goalkeeper.

London were under pressure when Darragh Quinn pulled down Conor Gaffney, and the resultant free from his black-card offence was put over with ease by Mulligan.

Conroy would respond with three pointed frees in a row, and after a period of more positive play, where Leitrim were allowing their opponents a chance back with a plethora of wides, the next chance would fall for Adrian Hanlon.

Clear in front of goal, and one of London’s best opportunities, he could have brought his side within two, but instead chose to go for the point.

There was still only three points between the sides as London had quietly managed to chip away at the deficit through the accuracy of Conroy’s boot, but they failed to capitalise on their momentum, shooting two wides immediately afterwards.

Conlan and Hanlon would exchange frees next, and with five minutes to go Hanlon set up Moore for what would be London’s last point.

In additional time, McWeeney got a decisive point to bring his side four clear and the victory was sealed through a Kennedy free as the game drew to a close.