HURLERS BACK IN THE CHASE 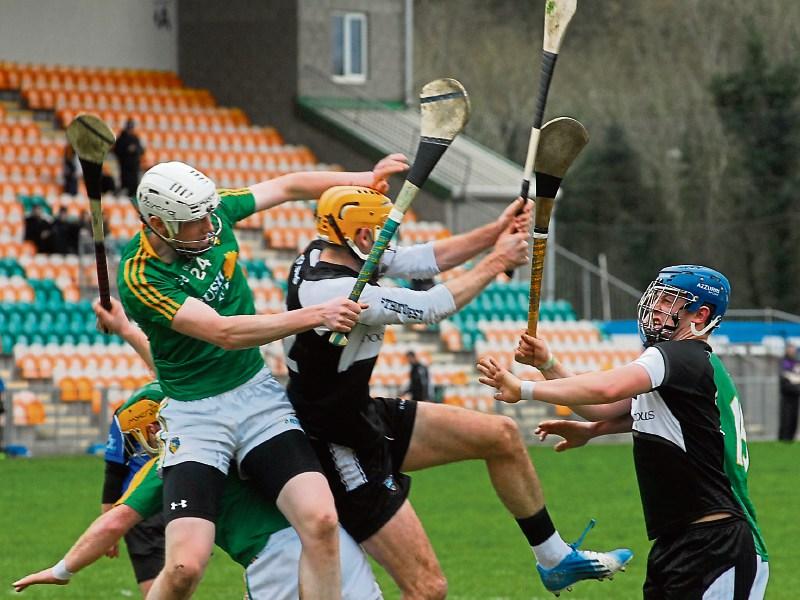 After slumping to a disappointing opening day defeat at the hands of Longford the Leitrim hurlers got their National Hurling League campaign back on track with an excellent win over Sligo in Pairc Sean Mac Diarmada last Sunday.

Unfortunately there weren't many in Pairc Sean to see this encounter, but those who were there witnessed an excellent encounter between two well matched sides.

There were standout performances all over the pitch for Leitrim. Paul Earley was assured under the high ball while the midfield partnership of Shane Kiernan and in particular Colm Moreton were pivotal to Leitrim's success.

Clement Cunniffe's importance to the team grew as the game developed while John Ryan and Padraig O'Donnell were both on top form although O'Donnell found it tough to adapt to the wind when striking frees in the second half.

The game was less than a minute old when Keith Raymond converted a free after he was fouled but that was soon cancelled out by a fine strike from Shane Kiernan from a wide left position after he was found by Colm Moreton.

There was little to separate the sides during the opening stages with Raymond regaining the lead before Leitrim once again levelled with a Padraig O'Donnell free.

Keith Raymond struck for his and Sligo's third point in the eight minute when he converted a free and a minute later it was to get even better for Sligo when they pounced for the game's opening goal.

Sean Kenny's dangerous delivery seemed as though it would be grasped by Leitrim goalkeeper Declan Molloy but under pressure from Daniel Kirby the sliothar escaped his grasp and it trickled across the line.

Despite that setback Leitrim continued to play well and two frees from Padraig O'Donnell meant just two points separated the sides after 14 minutes.

Just when it seemed as though Leitrim were fighting their way back, Sligo struck for a second goal. Keith Raymond did brilliantly to pick out Matthew Davey who shortened the grip on his hurl before powering a shot to the Leitrim goal.

Once again Leitrim looked to be in trouble, but once more they responded in style and three minutes later there was just a point between the sides once more.

The final stages of the second half saw the game slow down marginally with Sligo registering three further points courtesy of Keith Raymond (free), Daniel Kirby and Sean Kenny while Leitrim increased their tally with two pointed frees from Padraig O'Donnell.

A John Ryan point was cancelled out by a Raymond free before Clement Cunniffe struck a stunning free from 65 metres that seemed to lift all wearing the Leitrim colours.

Ten minutes into the second half Leitrim were awarded a penalty after Colm Moreton was hauled down and Padraig O'Donnell dispatched the penalty expertly to give Leitrim the lead for the first time.

Zac Moradi hit a wonderful point for Leitrim, either side of two Sean Clancy points and the sides were back on level terms with 14 minutes remaining when Keith Raymond converted a free.

However, Leitrim were soon to regain control of proceedings with four unanswered points - frees from Cunniffe and O'Donnell and two fine points from Moradi.

Sligo refused to throw in the towel and replied with a Ciaran Brennan point but this was to be Leitrim's day and victory was all but secured when they struck for a third goal with four minutes remaining. After John Ryan and Gavin Hagan linked up well, Moradi was quickest to react to O'Hagan's delivery and with a deft flick he dispatched his shot past the Sligo goalkeeper.

Two Keith Raymond points gave Sligo a glimmer of hope but it would prove to be too little too late. Not even a late red card for John Ryan could derail the Leitrim challenge and victory was assured with another stunning point from Moradi at the death.