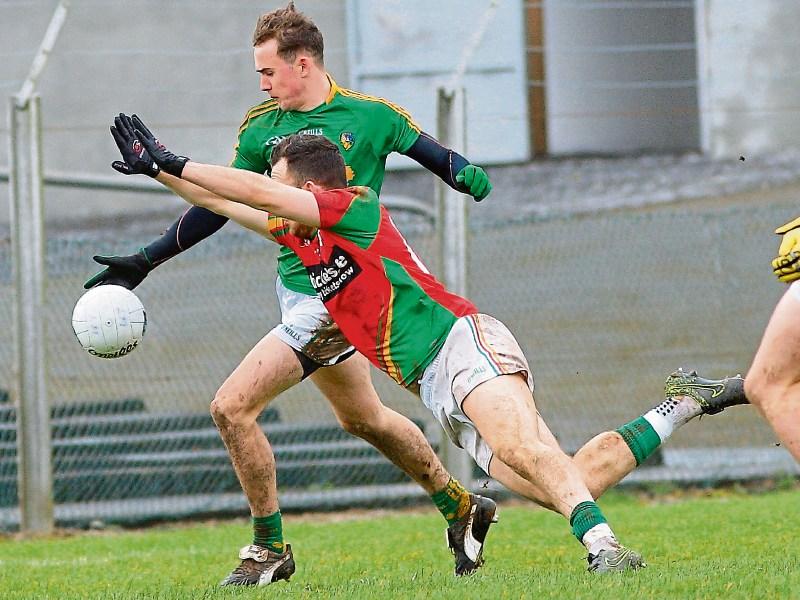 To call it a horror show may seem overly dramatic but for the paltry few fans who showed up last Saturday, Leitrim's display against Carlow was truly that - a horror show.

Losing matches is something Leitrim are historically and unfortunately well used to, the long time residence in Division 4 testament to that fact but failing to compete with energy and enthusiasm is not something the fans of the Green & Gold are used to.

From the off, Leitrim looked leaden footed, lethargic and, harsh as it is to say, disinterested as an end of season feel pervaded last Saturday’s clash with Carlow in Pairc Sean Mac Diarmada.

Both teams started the game on four points, both had suffered disappointing defeats and morale boosting victories but last Saturday, only one team turned up and delivered on the day and unfortunately it was not Leitrim.

Carlow dominated midfield where Brendan Murphy and Sean Gannon were in complete control, despite a few efforts to rile Murphy while their defence was never truly tested despite a few bright moments from Emlyn Mulligan in the first half.

And upfront, their full-forward line delivered as Carlow faced the wind in the first half, dragging the full-back line all over the field and drawing fouls that formed the basis of a first half dominance that saw Leitrim trail 0-6 to 0-4 at halftime.

That was truly the death-knell for Leitrim as the ferocious wind and the heavy conditions of the pitch, sodden by two pre-match downpours, meant that building any sort of rhythm in the second half for a lighter and smaller Leitrim team was almost impossible.

Manager Shane Ward spoke of disappointment and the team not delivering on the day, an assessment perhaps designed to protect his players from public criticism but it was a display that should haunt a Leitrim team setting it’s sights on the championship.

It doesn’t help that championship opponents Roscommon are setting the world alight in Division, a defeat to Mayo last Sunday notwithstanding, and Leitrim fans are increasingly looking at the meeting with the old enemy with growing dread.

Leitrim, playing with a strong wind down the centre of a sodden Pairc Sean, had two early wides and Carlow one before Emlyn Mulligan opened the scoring on four minutes, set up by good work from James Rooney.

But Carlow soon stamped their authority on the game, Chris Blake scoring a lovely effort although there was a hint of steps before Paul Broderick converted four frees in a nine minute spell as Leitrim’s defence were unable to cope with the Carlow full-forward line.

Fouls on Broderick and Blake led to scores with Broderick making light of the strong wind with a huge curling effort into the second while there were yellow cards for Carlow’s Brendan Murphy and Leitrim’s Gary Reynolds.

The Leitrim captain was incredibly lucky to stay on the field when he hauled down a Carlow attacker after his yellow and Leitrim’s next score came with a bit of luck, a desperately poor free being intercepted by Leitrim and Paddy Maguire rushing through to score on 22 minutes.

Carlow replied instantly, an incisive passing move putting Derek Hayden through on goal who shot over despite being pulled back.

Leitrim seemed to make a bit of a surge with two points from Emlyn Mulligan, the second a brilliant point from the corner but then followed wides from Sean McWeeney, Donal Wrynn and Mulligan as Leitrim made little use of the strong wind.

James McGrail replaced Nevin O’Donnell after halftime but the visitors extended their lead, Gary Kelly seeing his point tipped over the bar as Niall Woods and Brendan Flynn collided under pressure in the goalmouth.

Carlow’s Broderick saw a free hit the post while Conor Gaffney was desperately unlucky when his fisted effort from Shane Moran’s shot struck the post and was cleared.

Micheal McWeeney raided from defence, a great block denying his a shot on goal but from the resulting fifty, Carlow intercepted, leading to a great point from Chris Blake from an impossibly tight angle, so tight it looked wide to some.

Donal Wrynn had a poor wide while a high ball was worked back to Gaffney but another block led to another fifty that was easily cleared.

Two Darragh Foley frees in the space of a minute midway through the half had Carlow six clear but Leitrim unexpectedly found a way back into the game with 15 minutes left.

A long ball to McGrail broke kindly for a running Ronan Kennedy who drilled a low shot over the head of keeper Robbie Molloy for a dramatic goal.

Leitrim tried to raise the pace again but Carlow easily weathered the Leitrim flurry with only a short Kennedy effort troubling the visitors’ backline before it was cleared.

And Carlow made sure of victory with Foley converting a free with eight minutes left and Daniel St Ledger capping off a break out of defence with a fine point to seal a five point win.