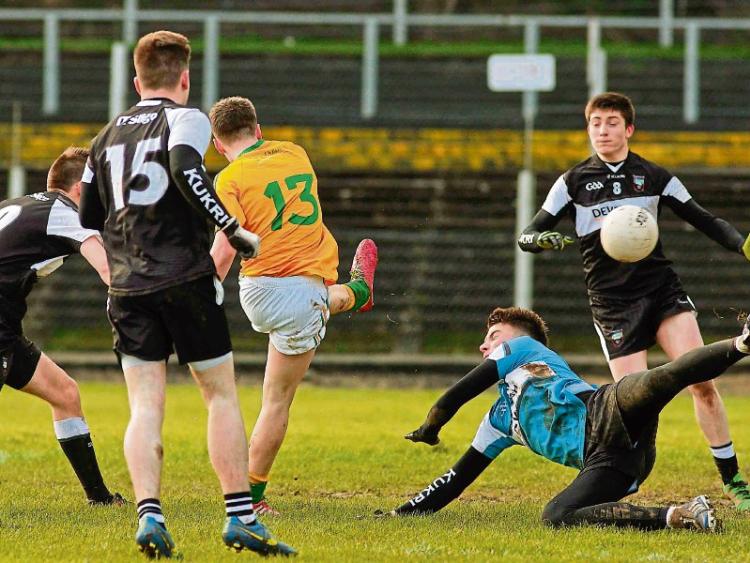 Leitrim recorded their first win of the Connacht Minor League last Saturday as they accounted for Sligo in Pairc Sean Mac Diarmada.

In tough playing conditions that cannot have been helped by the preceding National League game against Carlow, Leitrim took control of the contest against Sligo early on and never let go, holding off a Sligo surge in the second half.

The victory leaves Martin McGowan’s team in third place in the League table, two points behind leaders Roscommon and one behind Galway. They are level with Mayo but occupy third place by virtue of a scoring difference of minus 14 to Mayo’s minus 15.

Leitrim face Longford next Saturday in Newtownforbes and will be anxious to build on last Saturday’s victory but in an unpredictable competition, it is hard to know what sort of Longford team the Green & Gold will face.

The Longford men suffered an horrendous 6-19 to 0-4 loss to Galway just two weeks ago but last Saturday, they drew with a Roscommon side who top the table and have hammered Sligo and Mayo.

Leitrim will be without the influential Niall McGovern for some time after he suffered a knee injury at a training camp but the Green & Gold have yet to have a full-strength side out as they deal with players recovering from injury.

Sligo opened their scoring with a point from half-back Rory McHugh and good defensive work held out Sligo before Conan Marren converted a free to cut the gap to a point.

Leitrim had a couple of chances to extend the lead but got penalised for over-carrying while Narada Patrasco fired wide twice in quick succession. Jack Gilheaney then intercepted a dangerous Sligo attack while Darragh Rooney was unlucky to lose the ball in the muck along the sideline.

A yellow for a high tackle for Caleb Duffy followed before Rooney was unlucky with a chance, Riordan O’Rourke following up with a good point that could have been a good.

Leitrim continued to dominate in defence with Jack Gilheaney making key interceptions and Sligo’s chances took a major blow when Adrian Frain was given a straight red card for a foul on Eoghan Keegan after the ball was played away.

Chandler hit a left footed point after a great pass from Duffy and just two minutes before the break, Leitrim pounced for a goal, Riordan O'Rourke seeing his first shot blocked by Sligo keeper Eamon Kilgannon but the ball fell to Shaun Chandler for the goal.

That left Leitrim with a commanding 1-7 to 0-2 halftime lead and a man advantage for the second half on a very heavy pitch but Sligo made a blistering start to the second half as they scored two goals in the first five minutes.

A long ball from Daire Kerins found Liam Gaughan who blasted to the net and despite a fine point from Ethan Harkin, Gaughan pounced for a second goal moments later to incredibly leave just two points between the teams.

Marren added a point to narrow the gap further but Leitrim showed their mettle when a great run out of defence from David Mitchell led to a goal for Caleb Duffy.

Sligo had a point from Gaughan but also had some bad wides and great pressure from the Leitrim defence denied them a clear cut goal chance midway through the half before Riordan O’Rourke fired over a free on 17 minutes while Darragh Rooney added free a minute later.

Sligo continued to exert pressure, a point from Sean Carrabine narrowing the gap but the score was wiped out thanks to two Riordan O’Rourke points, one from a free and the other set up by great work from Jack Gilheaney.

Leitrim led by six points as the game entered added time but Sligo finished with a flourish, Carrabine striking for a goal and Gaughan converting a free to leave just two points between the teams.