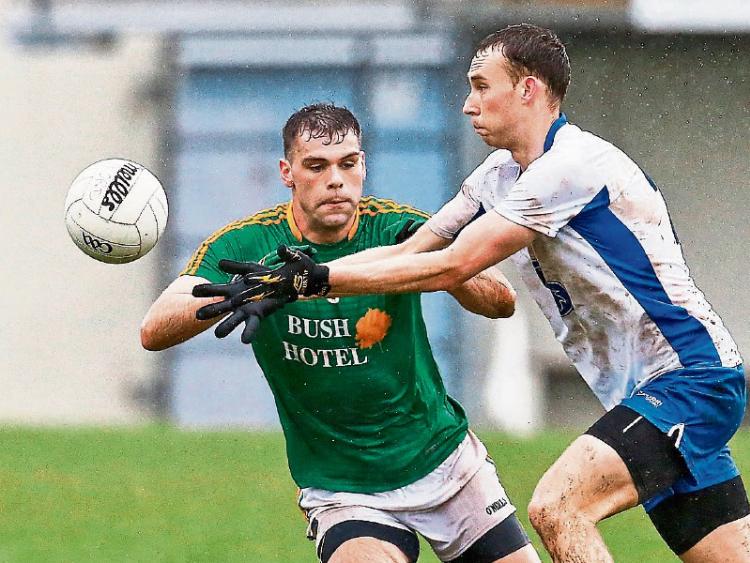 Conditions were far from ideal in Dungarvan’s Fraher Field which had experienced 36 hours of torrential rain by the throw-in time for Saturday’s last round Leitrim V Waterford Division 4 clash, the field drenching wet with one major puddle.

The adverse weather as well as playing conditions continued for the duration of a knife-edged encounter. At the conclusion, the free taking of Waterford’s J. J. Hutchinson, who hit the winner from a placed ball late on, proved to be the difference.

Both teams, to their credit, served up a reasonably good standard of play. Leitrim will perhaps feel that despite their best efforts, which resulted in a much improved display than against Carlow, that it was lady luck deserted them for another one point defeat like ones to Wexford and Wicklow.

Waterford with wind advantage made the brighter start and built up a 0-3 to 0-0 lead by the 18th minute. After that Leitrim seemed to cope better with the challenge for the remainder of the half and got right back into contention in this low scoring affair by the break when they trailed by just a point.

A Ronan Kennedy goal shortly after the restart put Leitrim in front for the first time and they subsequently held an edge in the proceedings for another twenty minutes.

However after J.J. Hutchinson levelled from a 58th minute free it was Waterford who dictated matters from there to the end with Leitrim unable to turn the tables on them despite a battling effort.

Waterford got the scoring action in the game underway when J. J. Hutchinson put over a third minute free. Leitrim had a chance to equalise two minutes later had not Emlyn Mulligan’s 30 metre free tailed off wide.

Waterford stretched their lead within two more minutes when Hutchinson again found the target from another free. Waterford’s James O’Mahony was a 15th minute black card recipient and was replaced by Michael O’Halloran.

Three minutes later, Waterford centre forward Paul Whyte soloed from just inside the Leitrim half shot over from close range. Leitrim eventually got their account opened when Emlyn Mulligan tapped over a 20th minute 20 metre free after Adrian Croal was fouled.

Mulligan reduced the deficit with Waterford to the minimum four minutes later when he hit the target from another free. But the Waterford men doubled their lead over Leitrim when Patrick Hurney fired over a 26th minute point. Waterford’s Joey Veale was shown yellow some six minutes later.

Following a very good attacking move which Barry Prior finished off, Leitrim managed to close the gap a single score at the break when the home side led 0-4 to 0-3.

Another good Leitrim move within 90 seconds of the restart saw the visitors register the game’s only goal and take the lead for their first time when Ronan Kennedy hit the top right corner of the Waterford net after he lobbed keeper David Whitty.

But Waterford reduced Leitrim’s advantage to the minimum four minutes later when Hutchinson shot over from play. After a good build up Leitrim opened the gap on Waterford to a two point advantage once more when Ronan Kennedy fired over a 42nd minute point after receiving a final pass from Croal.

Leitrim suffered a blow when Niall Woods was black carded a minute later, Killian McGriskin replacing Woods and it enabled Waterford to reduce Leitrim's advantage to the minimum after Hutchinson put over the resultant 13 metre free.

Waterford got on level terms two minutes later when Paul Whyte fired over from play. The Déise men took the lead again shortly afterwards following a Barry Prior foul on Joey Veale which was punished by the deadly accurate Hutchinson who split the posts from the placed ball.

But Leitrim got back on level terms when Ronan Kennedy, who was fouled, put over the resulting 44th minute 35 metre free. Conor Gaffney was issued with a yellow card a minute later.

Leitrim regained the lead for the last time in the contest when sub Killian McGriskin hit over a 52nd minute point when he got on the end of an attacking move. Two minutes later James McGrail was a yellow card recipient.

However Leitrim’s lead was short lived with Hutchinson converting his fifth free five minutes later. The home side kept the pressure on Leitrim with surging attacking runs and it was a result of one of these surges by Paul White that he won his side a free from which the all important winning score came in the 61st minute.

After Whyte was fouled, Hutchinson coolly converted the resultant 30 metre free and gave Waterford the narrowest of victories. The victory meant Waterford leapfrogged Leitrim in the final League table by virtue of the head to head rule to leave Leitrim seventh.