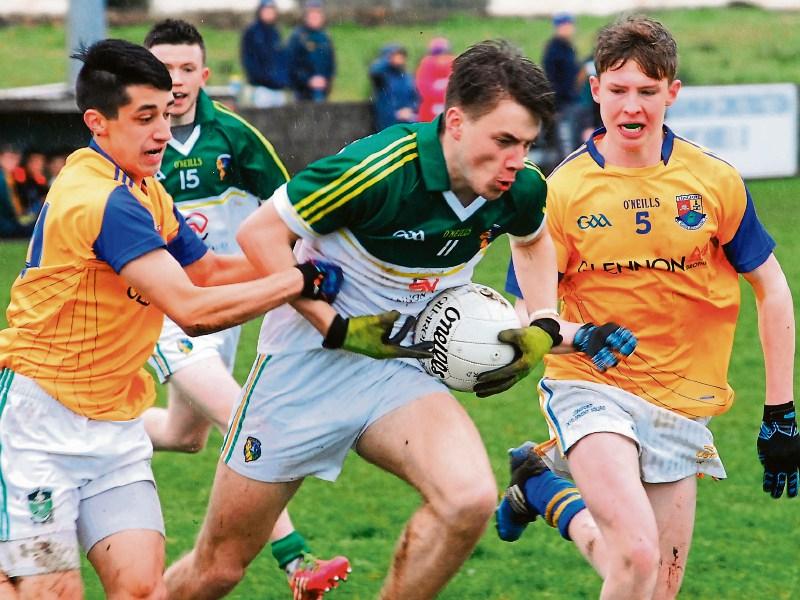 In a game that was never as close as the scoreline would suggest, Leitrim dominated in almost every sector of the field but were nearly undone by a porous full-back line that conceded four goals.

Those Longford goals came two in the first 12 minutes and two later on in the space of two minutes and can't hide the fact that Leitrim were in control of this contest for long periods.

Key to the dominance was the trio Jack Gilheaney, Caleb Duffy & Darragh Rooney whose physical power around the field gave Leitrim a huge advantage in slippery, difficult conditions in Newtownforbes.

Upfront, Seamus Sweeney was the star of the show, his pace and ball winning ability opening up the Longford defence time and time again and his return of one point doesn't adequately reflect his contribution to the game.

Riordan O'Rourke did well in attack, his goal a real mark of a quality forward and Leitrim have some real options in that area with a fully healthy team.

There will be concerns that Longford managed to find the net four times but Leitrim showed enough to suggest that it will take a good side to get the better of them.

With four teams within a point of each other, the title is still up for grabs. Galway have a point lead and will face a Sligo team who have yet to win a game so the Tribesmen are favourites to take the title.

Leitrim were dealt a blow just two minutes in when a long ball over the top was gathered by Thomas McGann who blasted a great shot to the net. Riordan O’Rourke replied with a free but Leitrim missed a couple of good chances, including frees.

Leitrim suffered another blow when a great passing move put Enda Farrell through the middle and he shot low to the net on 13 minutes.

But a great point from Seamus Sweeney started Leitrim’s fightback and despite an Enda Farrell score for Longford, Leitrim found their range with points from Riordan O’Rourke, Alan Doonan and Darragh Rooney.

That left Leitrim two points behind but they went in front with less than two minutes to go when O’Rourke blasted a shot only to see the ball hammer off the post. But O'Rourke grabbed the rebound and cut one way before cutting back to blast the ball to the net.

O’Rourke added a free as Leitrim led 1-6 to 2-1 at the break and despite a Rory Hawkins free early in the second half, Leitrim started to show their dominance on the scoreboard with O’Rourke and Rooney pointing in the space of a minute.

Caleb Duffy swapped points with Robbie O’Connell but Leitrim made sure of the win when Leitrim put together a great passing move that ended with Sean Harkin cutting through the middle to fire low to the net on 15 minutes.

Darragh Rooney added two points, one from play, before O’Rourke converted a free.

Longford then incredibly fought their way back into contention with two goals in two minutes - first Jack Gilheaney conceded a penalty when he pulled down Farrell on his way through and was lucky to avoid a black card.

Hawkins converted the penalty and two minutes later, Brian Sweeney got on the end of a great move to find the back of the Leitrim net, leaving three points between the teams.

Hawkins added a point with four minutes to go but Leitrim showed their resolve when Caleb Duffy burst through for a lovely point. And Leitrim made sure of the win with injury time points from O’Rourke and sub James Clancy.