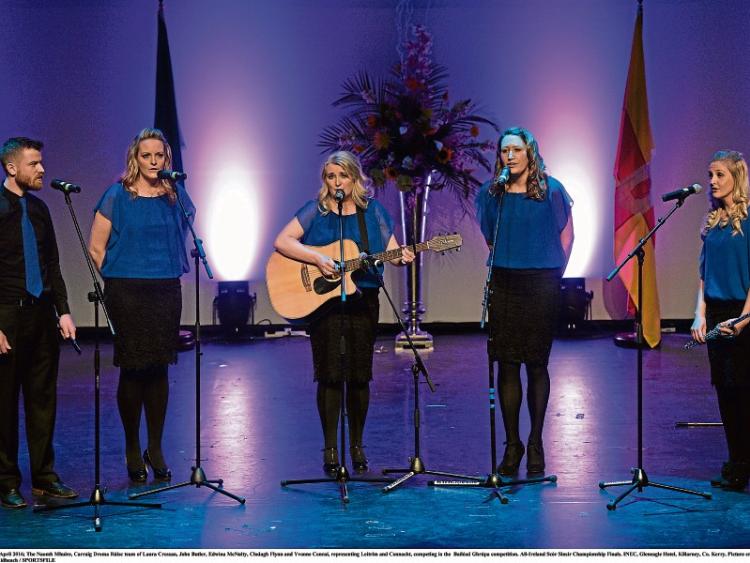 There was sheer heartbreak and disappointment for the Leitrim participants in this year’s All-Ireland Scór Final in Killarney last Saturday.

The standard of this year’s finalists was as high as ever seen in previous years but Leitrim were still eagerly tipped winners amongst the audience.

The new adjudication system of a single judge per competition once again left bad feeling among provinces with some of the choices that were made.

St Mary’s figure dance team gave an outstanding performance as they were the first of our acts to hit the stage in the INEC Killarney, the eight ladies gave it all they had and it was very much felt that they stood a great chance of lifting the title but Spa from Kerry were declared figure dance champions.

Connacht was represented by Norrie Keane of Galway in solo singing; she gave a beautiful self-written performance on Saturday which clinched the province the only title of the night.

Laura Crossan from the St Mary's club gave the audience a great laugh with her recitation piece, despite serious technical issues with sound; it didn’t deter her and well delivered as always, the title was won by Hugo Slevin from St Joseph's club in Westmeath.

St Mary’s also representing the province in Instrumental Music delivered a fabulous and uplifting array of tunes. A very talented bunch of people, having savoured their first taste of an All-Ireland experience no doubt they gave the adjudicator a tough choice to make but the title went to Tyrone.

St Mary’s ballad group had a long wait throughout the day as they were last to the stage in this competition, nearing the end of the evening’s performances. They gave a fabulous performance and sang their hearts out but it wasn't to be their night either as the title went to Saul from Co Down.

Overall it was a fantastic weekend with the Leitrim contingent occupying their favourite "Leitrim room" organised by our number one supporter Ailbhe McGill in the Gleneagle on the Saturday night and the music and song went on to the small hours of the morning.

Congratulations to all involved, fine performances were delivered on stage on Saturday; each Leitrim act represented the county and their clubs to the finest degree, well done to all.

Many thanks to all who travelled the long journey to Killarney, the good luck messages received by text and calls and cards that were received, it was a sincere achievement to qualify for all-Ireland finals and in particular for St Mary’s to have had four acts in one competition.

Laura Crossan will be exhausted from the pressure of her four stage performances but should be bursting with pride for her achievements and excellent deliverance on the day. Leitrim’s 2016 Scór achievements will go down in history and be a memorable occasion for years to come.