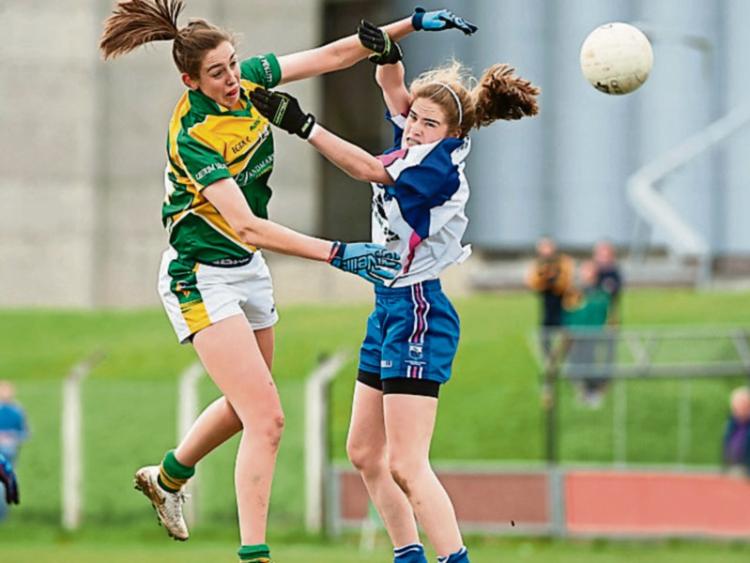 Leitrim’s dreams of further advancement in the Ladies NFL Division Three league campaign were brought crashing down in McCann Park Portarlington on Sunday afternoon when red hot pre match favourites Waterford handed out a 30 point drubbing to the Connacht side in the Division semi-final.

Waterford will play in the Ladies senior championship this year after claiming last season’s intermediate championship title. The gulf in class between Leitrim and Waterford was very much in evidence in Sunday’s encounter.

The Waterford women led from the fourth minute of this clash and continued to mercilessly kill off the Leitrim challenge for the next fifty-six minutes of football.

The Leitrim resistance was somewhat effective in the first half but the concession of three goals to the Munster outfit in this period put matters a long way out of the reach of Pat Costello’s team by the interval.

Despite the concession of the three first half Waterford strikes, Leitrim defended well at times in this phase of the game and managed to curb their opponent’s attacking threat somewhat.

However the hill that Leitrim had to climb when facing a twelve point deficit for the second half proved to be a bridge too far for Pat Costello’s girls. The intensity of Leitrim’s second half effort dropped from what they had shown in the first 30 minutes and Waterford more than doubled their advantage by the time Carlow referee Jonathan Murphy sounded the final whistle.

Leitrim had committed performers in Mairéad McCauley, Claire Owens and Melissa Hewitt in defence while Anna Conlan and Ailish O’Dowd put in a lot of good work at midfield with Áine Tighe, Michelle Guckian and Carla LaGuen looking sharpest in attack.

There were no weak links on the Waterford side with Michelle McGrath, Linda Wall and Louise Ryan impressing in defence while Katie Murray and Megan Dunford held the upper hand at midfield and Maria Delahunty, Sinead Ryan and Michelle Ryan were the Déise outfit’s most lethal forwards.

Waterford opened the scoring in the game when Maria Delahunty put over a second minute free. Leitrim got on level terms with Emma Guckian firing over a point after receiving a pass from Michelle Guckian.

Aileen Wall put Waterford into a lead they never surrendered when she hit over a fourth minute point from play.

Shortly after the Leitrim kick-out Waterford’s Katie Murray won a ball and soloed from midfield to finish from close range to her opponent’s net.

Áine Tighe replied with a sixth minute Leitrim point from play. But Waterford struck for another goal within the space of a minute when Michelle Ryan hit the back of the Leitrim net.

Maria Delahunty put the Déise women into a nine point lead when she split the Leitrim posts from and an eight minute free.

Waterford tacked on two further points to their lead by the 13th minute after Liz Devine and Michelle Ryan hit the target from play and a free, respectively. Áine Tighe replied with a Leitrim point from play shortly afterwards.

Leitrim reduced the deficit with Waterford to 0–7 with their second score in succession when Michelle Guckian fired over from play in the 19th minute after receiving a pass from Emma Guckian.

Waterford responded with three unanswered points over the next four minutes when Liz Devine, Katie Murray and Maria Delahunty (free) added to the Déise tally.

The Leitrim challenge suffered a further first half set back when Sinead Ryan shot Waterford’s third goal just before the break to leave the Déise side commandingly leading by a 3 – 8 to 0 – 5 interval gap.

After the opening 30 minutes the women in the green and gold struggled to take the game to their opponents to a significant degree in the second half.

Maria Delahunty stretched Waterford’s lead when she shot a 34th minute point. Waterford continued to pound the Leitrim posts and further increased their advantage on the scoreboard over the next eight minutes with Sinead Ryan, Maria Delahunty and Michelle Ryan all firing over a point each while Grainne Kenneally hammered home a goal.

It was all one way traffic in the scoring stakes with Waterford adding 3-3 to their whopping lead in last eighteen minutes of the action when they also held Leitrim scoreless.

This period that commenced with a 49th minute goal by sub Ciara Hurley and concluded with a similar final minute score by Hurley again. In between these two scores Waterford’s Sinead Ryan shot 1 – 1 with sub Róisín Tobin chipping in with a point from play while Maria Delahunty put over her fourth free of the afternoon.