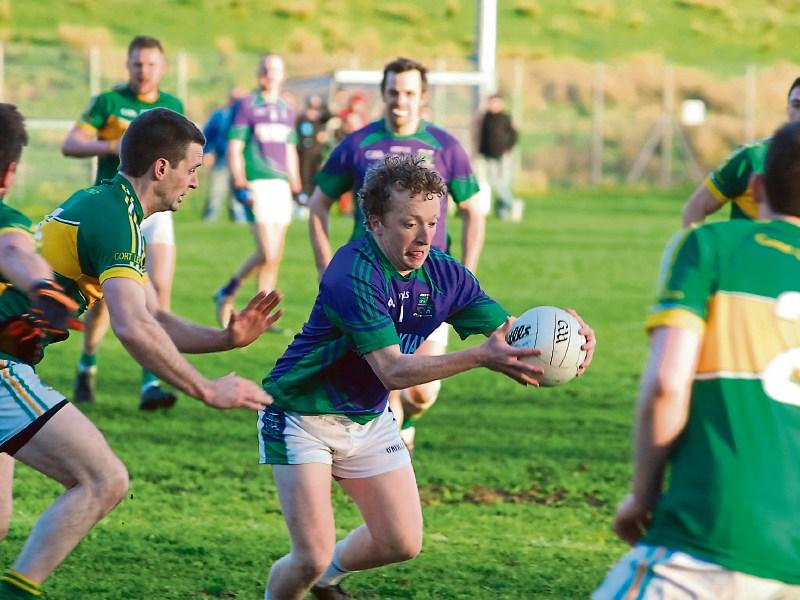 Round two of the Dunnes Bar Division 1 League saw a number of big wins and although it is still very early in the competition it is the County Championship winners from the past two years, Aughawillan and Mohill who are setting the pace.

Aughawillan and Mohill are top of the table (level on scoring difference) along with Ballinamore Sean O'Heslins and St Mary's Kiltoghert who have all registered two wins from their opening two games.

At the other end of the table there are four teams - Dromahair, Leitrim Gaels, Melvin Gaels who will be hoping for a change in fortunes this coming weekend having all lost their opening two fixtures in Division 1.

In a very tight contest Aughawillan were one point winners over Annaduff. Aughawillan enjoyed a four point advantage at the interval but displaying great character Annaduff produced a great finale but ultimately were unable to find a levelling score.

A Joe Cox goal helped reduced the deficit to the bare minimum but that was as close as Annaduff got to their opponents who have got off to the best possible start after defeating Leitrim Gaels in the opening weekend.

Sitting at the top of Division 1 alongisde Aughawillan on four points are Mohill who recorded a three point win when they travelled to Kinlough to face Melvin Gaels.

Ballinamore Sean O'Heslin's will no doubt be hoping that there encouraging start to the League campaign is a sign of things to come as later in the year they will be hoping to emerge from the Intermediate Championship at the third time of asking.

On Saturday last they recorded a three point win over near neighbours Aughnasheelin having recorded a six point over Annaduff in their first outing a week earlier.

St Mary's Kiltoghert are the other side to have their 100% record still intact after two games. On Saturday last they defeated Glencar/Manorhamilton in a competitive encounter in Pairc Naomh Mhuire, Carrick-on-Shannon.

St Mary's led by two points at the interval (1-6 to 0-7) before they extended that advantage to six points with 10 minutes remaining. However, showing the character and resiliance that have been their hallmarks in recent years Glencar/Manor reduced the deficit to just two points.

However, that was as close as they would get to their opponenst as St Mary's saw the game out to record their second win of the campaign.

Allen Gaels sit in sixth place in the league table, behind Glencar/Manor following their 10 point win (1-15 to 1-5) over Dromahair on Saturday evening.

Gortletteragh registered their first win of the league when they condemned Leitrim Gaels to a second defeat, winning 0-10 to 0-5.

This weekend sees the teams back in action for the third game of the league campaign but the teams will be playing what was listed as the eight round of games.

Explaining the reason for the this a circular from Leitrim County Board stated, “In making these fixtures we took into consideration that several clubs will have players involved with the County Hurlers who are playing Warwickshire in Round 1 of the Lory Meagher Cup on Saturday at 2pm.

“Hence the reason for jumping to Round 8 of the ACL1 so as to facilitate as many Clubs as possible and still get all our planned fixtures played.”