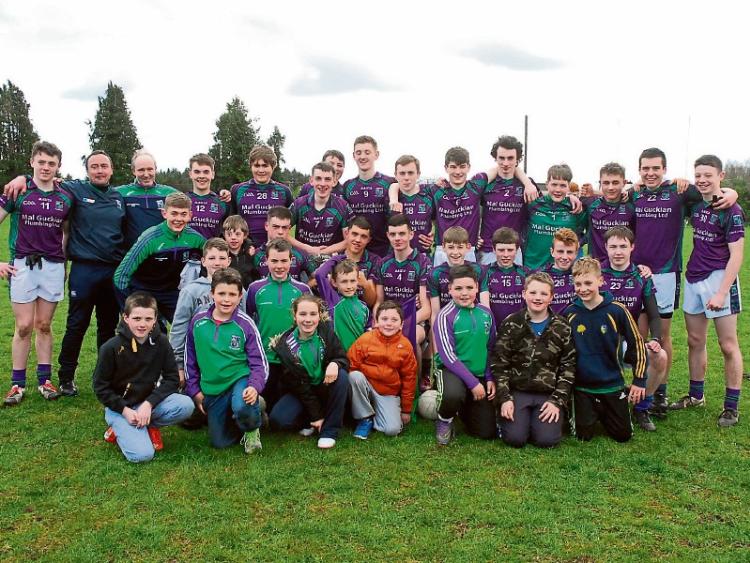 Leitrim Gaels produced an excellent team performance to comfortably see off the challenge of Ballinamore Sean O'Heslins in Philly McGuinness Park, Mohill on Saturday last to claim the Minor League B 15-a-side title.

While there were exceptional performances all over the pitch for Leitrim Gaels it was the sum of their parts rather than any one individual contribution that led them to victory.

With the game barely eight minutes old Leitrim Gaels were already looking as though they were on course for victory as they made a commanding start to proceedings.

Three converted frees from Stephen Goldrick inside the opening five minutes helped settle any nerves that may have been present among the Leitrim Gaels players and they grew in strength from that point. Further points from Thomas Harden after a strong, untracked run and Narada Patrasco helped put five points between the sides and even though there was just eight minutes played, it was already looking ominous for Ballinamore.

Brian McElgunn was hugely influential for Leitrim Gaels in midfield but all over the pitch Ballinamore seemed to having difficulty competing with the work rate displayed by the Leitrim Village side.

Ballinamore registered their first point of the game in the ninth minute when Kevin Mullen converted a free but Leitrim Gaels soon hit back.

Narada Patrasco showed good pace and movement as he moved in off the wing before pointing and a minute later Jack Flynn pointed after he was found in space before Stephen Goldrick converted his fourth free of the game to give his side a seven point advantage after 18 minutes of, largely one way, action.

Ballinamore scored their second point of the afternoon moments later when Kevin Mullen converted another free but moments later Leitrim Gaels were celebrating the first goal of the game.

Leitrim Gaels were allowed the space to work a quick sideline ball which found its way to Ryan Goldrick and from close range he found the Ballinamore net.

Understandably shell-shocked Ballinamore attempted to get into contention but were only able to produce a Kevin Mullen pointed free as a way of reply.

Leitrim Gaels were showing no signs of resting on their laurels and registered three points without reply to further extend their lead with Shane Finn, Stephen Goldrick (free) and Ryan Goldrick helping to open up a 12 point advantage.

Ballinamore replied with an excellent free from Darragh Murphy from 40 metres but it was to be Leitrim Gaels who would have the final say in terms of first half scoring as the deadly accurate Stephen Goldrick converted another free to give his side a 1-13 to 0-4 lead at the break.

Ballinamore needed a fast start to the second half but it was Leitrim Gaels who were quickest out of the blocks as they pounced for a second goal two minutes after the restart, scored by Stephen Goldrick which all but ended the game as a contest.

Leitrim Gaels extended their lead with a Brian McElgunn point before Ballinamore managed to score two successive points for the first time in the game.

The first of those scores was a Darragh Murphy point while the second one was an excellent score from Kevin Mullen after good work from Matthew Morris. Incredibly, with 10 minutes of the second half played this was Ballinamore's first score from play.

Two Stephen Goldrick converted frees further extended the Leitrim Gaels lead before Ballinamore replied with a goal when Kevin Mullen powered a free to the roof of the net.

That proved to be little more than a consolation score as Leitrim Gaels comfortably saw out the remaining 13 minutes to claim a thoroughly deserved win.