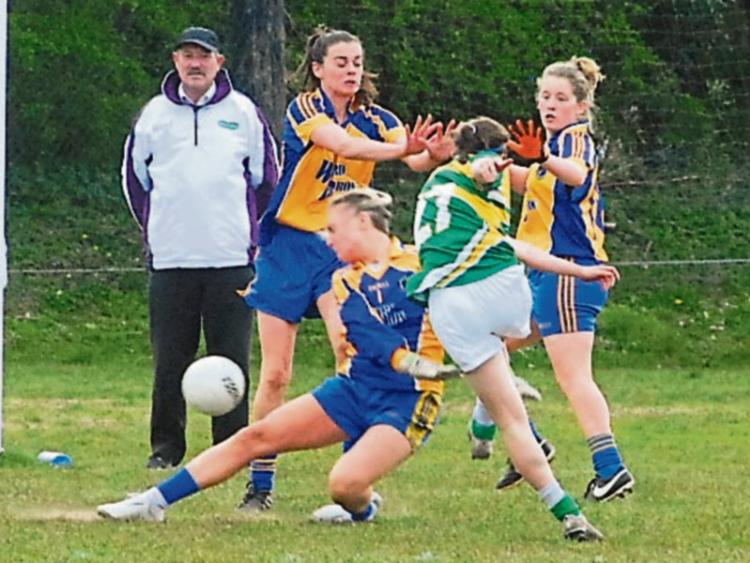 After a very sluggish start in the early minutes of Saturday’s game, Leitrim handed out a nine point drubbing to a Roscommon outfit that decisively defeated them in their League clash earlier this year.

Leitrim, for whom a number of experienced players have now returned to duty, probably turned in the best performance of the year. The Leitrim women displayed improved cohesion all round against Roscommon and made few errors in the TG4 Connacht Intermediate clash in Pairc Naomh Mhuire.

It was very evident when Roscommon tried to lift their game in the second half in Carrick that Leitrim responded with tiger like commitment to shut the Rossies down all over the field.

Six Leitrim players got on the scoresheet during the clash, quite a satisfactory development for Pat Costello’s side that during the recent NFL campaign relied heavily on the scoring contributions of one or two players during the season.

Playing against the breeze, Roscommon got the action underway with a whirlwind start when Jenny Higgins fired over the crossbar just 20 seconds after the throw-in. Less than a minute later Rachel Ryan fired over another point from play.

A shot into the Leitrim goalmouth area just prior to the 2 minute mark rebounded off the right upright and Jenny Downey won the race with keeper Michelle Monaghan and fired to the net to put Roscommon 1-2 to 0-0 ahead.

Following a shortly hit 4th minute ’45,’ Carla LeGuen was put through to fire over a point and settle her side down after their somewhat jittery start to the game. But Roscommon continued to dictate matters with Downey firing over a pair of points from play. But after these two scores, Roscommon went completely out of the game when failing to score for the remainder of the half.

Leitrim began to dominate the proceeding after Michelle Guckian split the posts with an 8th minute point from play that followed on from another ’45’ her side had forced their opponents to concede.

Leitrim camped in the Roscommon half and got on level terms by the 14th minute with five unanswered points on the trot. Three of these scores were registered by Michelle Guckian with one coming from a free while Róisín Fowley set up another Guckian point.

Fowley chipped with a point of her own and Áine Tighe punished a foul on her by tapping over the resulting free. Leitrim took the lead for the first time when Fowley landed a 16th minute point and the home side never surrendered their advantage after that.

Michelle Guckian hammered home a goal two minutes later very much put Leitrim in the driving seat. Neither side managed to chalk up another score in the following ten minutes but Leitrim did manage to increase their advantage just before the break with Tighe converting a free and Fowley firing over to grab a 1-10 to 1-4 interval lead.

Roscommon, who now had wind advantage, reduced the deficit when Jenny Downey tapped over an opening minute of the second half free. But the visitors hopes of a second period fight back were dashed three minutes later when Róisín Fowley fired to the Roscommon net to give Leitrim a double scores lead.

An exchange of points from frees by Laura Fleming and Michelle Guckian saw the status quo maintained on the scoreboard by the 38th minute.

Over the next four minutes Roscommon reduced the gap to five points after Downey and Higgins hit the target from frees while sub Caoileann Beirne shot a point from play.

Any hope of Roscommon turning the tables on Leitrim were over a minute later when Áine Tighe, after soloing for 25 metres and evading a number of defenders, fired to the top of the net from 13 metres out.

Two minutes later Laura Fleming replied with a point at but a 60th minute goal by U19 soccer international Dearbhaile Beirne really put the outcome of the tie beyond any doubt. Siobhan Tully had the last say in the game’s when she hit a Roscommon point a minute later.