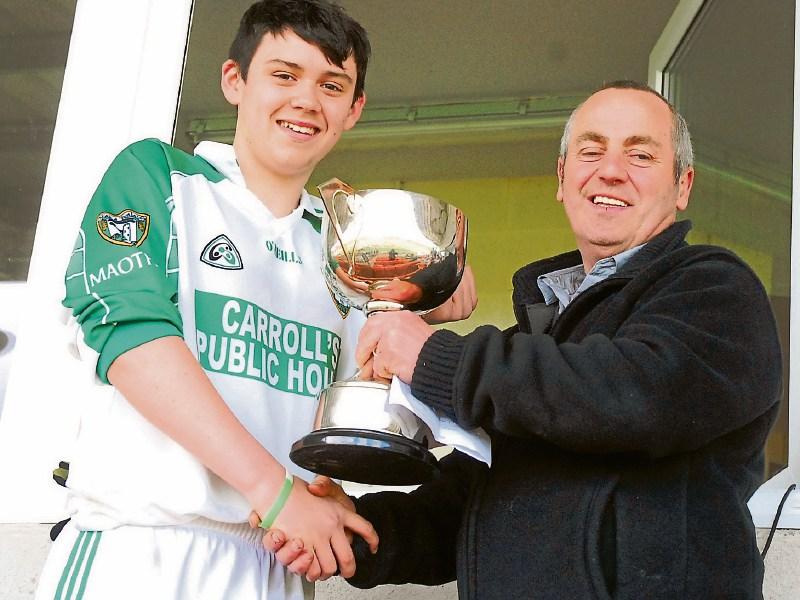 With Fenagh cruising to victory coming up to halftime, young McGuinness grabbed a goal out of nowhere, fielding a high ball and turning man and keeper to blast to the net from close range.

That goal transformed what had been a St. Caillin's procession at that point - with Riordan O'Rourke pouncing for 1-4 with relative ease in the first half and Jack Gilheaney and Aaron McLoughlin dominating the middle of the park, Fenagh looked a class apart.

It wasn't just the scoreline though - the body language of Manchan's players suggested defeated but McGuinness' goal, in the last seconds of normal time, threw them a lifeline they grabbed with the intensity of a team determined not to let the chance evade them.

And a transformed team they were in the second half. Eoghan Keegan & Tadhg Mulligan absolutely dominated in the air in the middle of the park, giving Manchan's a huge platform to build on while McGuinness' redeployment to full-forward unsettled Fenagh's defence immensely.

And the four Harkin brothers stepped up - Kailon and Evan shared man marking duties on Riordan O'Rourke to limit him to just one point in the second half, all the time while Sean and Ethan drove their team on.

It was a remarkable transformation that looked so unlikely when Mark Keegan fed Riordan O'Rourke for an easy goal just three minutes into the game.

Ethan Harkin and O'Rourke swapped points but Fenagh took control as they swept over points from Jack Gilheaney, Alan Doonan and O'Rourke again. Manchan's kept in touch with a Fiachra McGuinness point 16 minutes into the half.

But Manchan's were dominating, Aaron McLoughlin was inches wide with a goal chance while O'Rourke fired over two points to stretch the lead to seven points.

But just before halftime, a high ball was brilliantly fielded by McGuinness above the full-back and keeper, he turned the keeper and drilled home a vital lifeline, leaving the halftime score at 1-6 to 1-2 in favour of Fenagh St. Caillin's.

Manchan's, however, were a different team when they came back out in the second half and two quick Ethan Harkin points had Fenagh worried as they replied through O'Rourke after four minutes.

Fenagh's lead evaporated on six minutes when a long ball found sub Niall Keegan in behind the goal and his assured finish tied the scores before, seconds later, Ryan Murphy fired over to give Mohill the lead for the first time.

A flustered Fenagh wasted two chances before Alan Doonan finished off a good move with a point but straight away, McGuinness fired over with a point that was way too easy from Fenagh's point of view.

Fenagh again responded, Jack Gilheaney pointing on 12 minutes but that was to be their last score of the game as Manchan's hit back immediately, Jordan Reynolds finishing a good move.

Fenagh kept looking for a goal that would rescue the game but it came at the other end - another huge long delivery from the wing found McGuinness who produced a spectacular finish with less than minutes of the half left to seal the victory.

There was no way back for Fenagh after that and a jubilant Manchan's would add further points from Ethan Harkin and McGuinness to seal the victory.