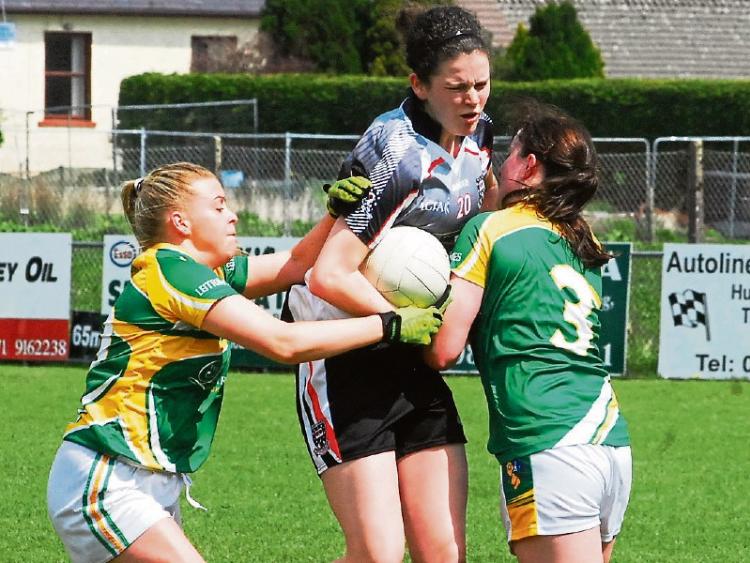 Leitrim’s plans to book a place in the Connacht Final were shattered last Sunday by an inspired Sligo after a rip-roaring encounter in Tourlestrane.

Leitrim needed just a point to automatically book their place in the Connacht Final but Sligo’s inspired showing resulted in a three-way tie between Leitrim, Sligo and Roscommon with the Yeats-women winning the lottery of a draw for a place in the final.

It means Leitrim must now battle Roscommon next Sunday in Charlestown for a place in the Final, their third outing in as many weeks as they seek to keep their dreams of a three-in-a-row alive.

The match was an incredible one that swung one way, then the other and back again but Sligo's strength down the middle proved crucial as Noelle Gormley made three excellent saves and Sinead McTiernan dominated the middle of the park with Bernice Byrne. Upfront, Stephanie O'Reilly dominated as Leitrim were never able to get to grips with the threat posed by the Sligo woman.

Aine Tighe was again exceptional for Leitrim while there were good moments from Michelle Heslin, Dearbhaile Beirne and Michelle Guckian.

Leitrim now face a big challenge next Sunday to defend their Connacht title but they will face a stronger and more focused Roscommon in a winner takes all encounter.

Sligo got off a to blistering start when Stephanie O’Reilly charged through the middle of the Leitrim defence to blast to the net inside the first minute, Sinead McTiernan following up with a point after patient approach play.

But Leitrim hit back in fabulous fashion - Michelle Guckian & Carla Le Guen combined to find Aine Tighe and a pass over the last defender allowed Roisin Fowley to break through and fire to the net.

Sligo almost hit back with a goal but O’Reilly cracked a powerful shot off the crossbar while Denise McGrath dragged a shot badly wide when in a good position. However, Sligo were hit with a harsh yellow card as Ann Marie Coleman was sin-binned after a foul on Dearbhaile Beirne, Michelle Guckian converting the free before Ciara Gorman fired a free over the bar for Sligo.

Michelle Guckian got away with a slight nudge on the defender as she had a goal chance after ten minutes but Sligo keeper Noelle Gormley made a superb save to deny a certain goal. From the resulting fifty, Leitrim worked the ball back to Guckian to score.

Leitrim, with the wind behind them, took the lead with a length of the field move that ended with Michelle Heslin on the over-lap as she fired the ball to the Sligo net.

Both sides missed chances before Aine Tighe blasted a ferocious shot off the crossbar as she charged up through the middle, the ball going over for a point as Sligo responded with a Denise McGrath point.

Sligo should have levelled on 19 minutes when Ciara Gorman’s shot crashed off the underside of the crossbar. Keeper Michelle Monaghan gathered the rebound but was penalised for barging as she attempted to brush past a Sligo attacker.

But Elaine O’Reilly hit a poor spot-kick, driving the ball well wide of the left post before Sligo closed the gap with a curling O’Reilly point.

A poor Michelle Guckian free was followed by points for O’Reilly & Bernice Byrne as Sligo drew level with four minutes of the half remaining and they immediately took the lead when O’Reilly was fed with the ball from the kickout, a clever solo opening up the goalmouth for a fine goal.

But Leitrim weren’t lying down and Gormley saved a Tighe shot before Michelle Guckian & Dearbhaile Beirne set up Michelle Heslin for a point. Just before the break, Leitrim turned over the ball and quickly transferred it into Aine Tighe who drilled the ball to the net for a crucial goal.

It almost got better but immediately got worse as Beirne was put through on goal but Gormley made the save while Beirne was yellow carded for a heavy challenge on the keeper.

That left the halftime score at 3-4 to 2-6 in favour of Leitrim but it got much worse for Leitrim when Roisin Fowley was sin-binned. The Dromahair player lost the ball but dragged down the Sligo player. Ironically, this brought out the best in Leitrim as Aine Tighe ran onto a long ball and drilled a low shot to the Sligo net.

Sub Emma Guckian fired over a well worked point but just as Leitrim got back to 14 players, disaster struck when Michelle Monaghan made a good save from a low shot only for the ball to rebound out to Laura Ann Laffey for a tap-in.

Sligo started a remarkable comeback with points from O’Reilly, Katie Walsh (2), Bernice Byrne and McGrath all pointed before O’Reilly fired over two points to stretch the lead to four points.

To their immense credit, Leitrim never gave up and a typical Aine Tighe run saw her fire a shot towards the right hand corner only for a flying Noelle Gormley to make a stunning save in added time.

From that fifty, Tighe tried again but her low shot was easily gathered by Gormley as Sligo comfortably saw out the remainder of the game.