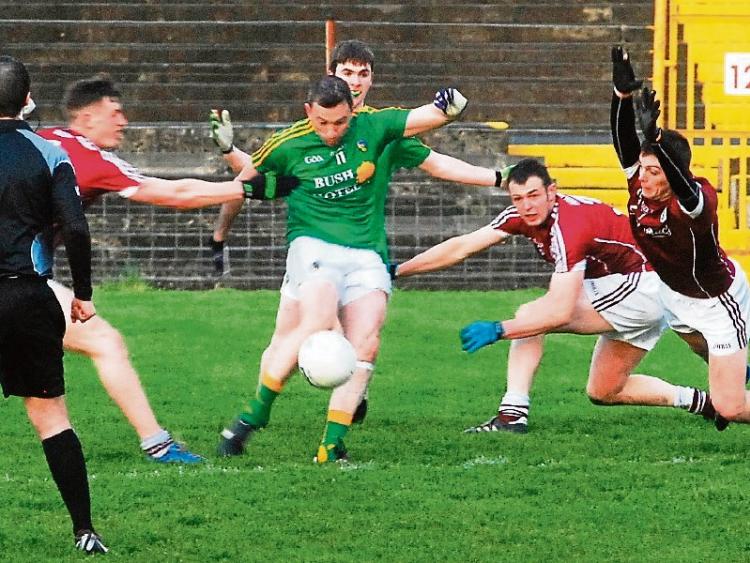 Galway's impressive strength in depth was just too much for Leitrim who were once again left ruing missed goal chances.

Hopes were high that a Junior team drawn from some promising U21 players, former Senior stars and strong club players could make an impression in this competition.

But such is the strength of the club football in Galway that the Tribesmen were always in control of this contest and dominated in most of the key sections, particularly in the middle of the park when Michael Day and Enda Walsh dominated.

Leitrim did create three clear cut goal chances but failed to take them, crucial misses that might have given them hope against a Galway side who dominated the contest physically. Jack Heslin stood out for Leitrim, Wayne McKeon did well when on the ball but Galway had the players who made the biggest impact.

However, Leitrim struck a big blow on six minutes when Kenny Cox’s long ball got in behind the Galway defence, the full-back getting a hand to the ball but not enough to divert it from Jack Heslin who turned and buried the ball in the net.

Wides from each team followed before Matthew Reddington cut in along the endline to point on ten minutes but Leitrim passed up a chance of a goal when they took two or three passes too many, the Galway defence getting back in numbers to intercept a Daire Farrell pass.

That was the turning point in the game as Galway went straight down the field and Alan Molloy curled a high shot between the posts. From the kickout, Galway worked the ball in the right wing, Leitrim missed an interception and Reddington passed across the goal for Antoine O’Laoi to punch the ball to the net.

Cian Clinton put a long range free wide while Adrian Claffey was lucky to just get a yellow card for a high challenge on James Glancy.

Leitrim should have gotten a goal when Jack Heslin played a clever one-two with Daire Farrell but as he advanced on the keeper, he put too much power into his shot, driving the ball high over the bar on 18 minutes.

That left a point in it but Galway hit three points in two minutes, O’Laoi with two frees and one from the impressive David Wynne before Cian Clinton converted a free. Galway finished the half with a point from O’Laoi as they led 1-7 to 1-3 at the break.

Leitrim made changes with Keith Keegan and Caillin Canning coming on but it was Galway who opened the scoring with points from Alan Kyne and O’Laoi, both excellent scores.

The Green & Gold then enjoyed a strong spell with three points in as many minutes - James Glancy was unlucky with a good effort but Jack Heslin showed great pace and persistence as he cut in from the wing and chipped over from a tight angle.

Ryan O’Rourke added a free before Leitrim were left lamenting another missed goal chance - Kenny Cox’s effort may have been a shot that dropped short or an outrageous pass but the fall fell right in the hands of a Dean McGovern at full-pelt.

The Ballinamore youngster burst through and had only the keeper to beat but he blasted high over the bar on 11 minutes. Galway immediately hit back with a point from Reddington and three minutes later, Niall Lee curled over a fine point to stretch the lead to five points.

The home side were on top and despite three wides, they added points from Day, Reddington (2) and Lee before the final whistle. Leitrim went looking for a late score and full-back Alan Armstrong raided from deep and scored a fine point over three minutes into added time to bring the game to an end.