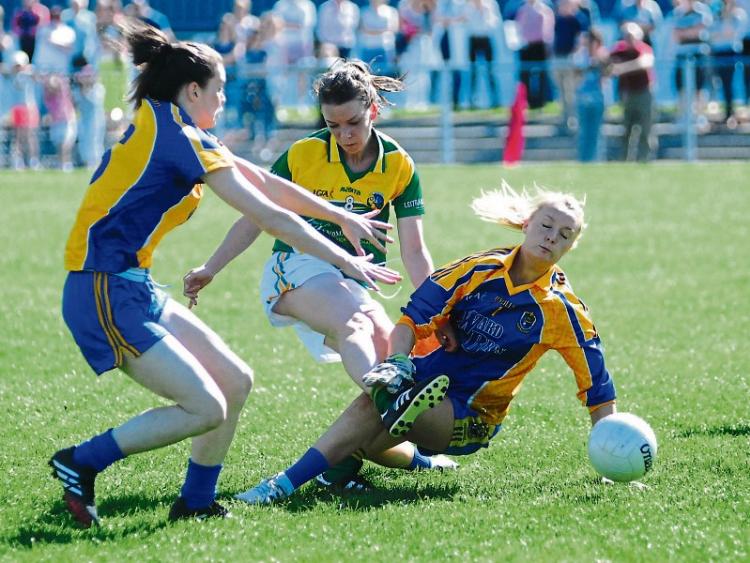 Goals win games is an old cliche but you wouldn't think that after scoring six goals, Leitrim would only have a point to spare against Roscommon after an epic encounter last Sunday.

After what developed into a titanic struggle on Sunday in O’Hara Park Charlestown, Leitrim escaped with a one point win over Roscommon and qualified to defend their TG4 Connacht Intermediate championship title on July 3 against Sligo in McHale Park Castlebar.

Leitrim got dream starts in both halves, twice scoring two goals in the first eight minutes of either half but they were left hanging on as Roscommon mounted a ferocious fight-back that fell just short in the eight minutes of added time.

The fact that Leitrim switched Michelle Guckian back into goal with ten minutes of normal time left shows just how close it was, management deciding that Guckian's presence between the posts was a greater guarantee of success.

The game was also a demonstration of just how much Leitrim rely on Aine Tighe as the Kiltubrid forward found the net four times, one of her goals coming straight from the throw-in when she soloed through for a vital goal.

Leitrim are back in the final but a watching Sligo won't allow Tighe the sort of room Roscommon gave her but reaching the final was the first target and the three-in-a-row dream is still alive.

Áine Tighe initiated a dream Leitrim start when she fired a free just 58 seconds after the throw-in from 40 metres out into the top of the Roscommon net. Tighe’s kick dipped under the crossbar at the last second, deceiving keeper Rachel Timothy.

Michelle Guckian put Leitrim further ahead with a point two minutes later and Leitrim's dream start got even better when Tighe struck for another goal on the six minute mark from close range before Roscommon opened their account a minute later with a Laura Fleming point from play.

Rachel Fitzmaurice cut the deficit with Leitrim to five points when she hit over an 8th minute point. Leitrim replied with an Áine Tighe point three minutes later while Roscommon had let off shortly afterwards when Tighe drove a clear goal chance inches wide.

But Leitrim found the back of the Roscommon net for a third time in the action when a ball hit in from close range in the 12th minute by Áine Tighe was nudged over the goal line by the Rossies centre back Sinead Kenny with Róisín Fowley in close attendance.

Roscommon hit back with a Rachel Fitzmaurice goal three minutes later but Leitrim kept up the pressure with Tighe banging home her side’s fourth goal in the 18th minute.

Over the next two minutes, Róisín Fowley and Áine Tighe stretched Leitrim’s lead to 11 points after they fired over a point apiece.

Roscommon regained their composure somewhat in the final ten minutes of the first half when they held Leitrim scoreless and added 1-3 to their tally. Sub Laura McLoone made a fine run at the Leitrim defence and found Shauna Connell who finished to the net.

Jenny Downey (free), Rachel Ryan and Joanne Cregg all added points for the Rossies before the break to leave their side trailing by just five points down at halftime, 4-4 to 2-5.

After the restart Leitrim bombarded Roscommon posts right from the throw-in when Áine Tighe drove forward, played a one-two with Áine Heslin before rattling the Rossies net with just 14 seconds elapsed on the second half clock.

Over the next three minutes, Leitrim put more daylight between themselves and Roscommon when Michelle Heslin & Róisín Fowley added a point each from play.

Leitrim struck for their sixth goal when Michelle Guckian and sub Carla La Guen combined in the 38th minute to set up Anna Conlan for a well taken goal from close range.

Leitrim stretched their lead over Roscommon to an incredible 14 points three minutes later when Michelle Guckian converted a free. But then Roscommon responded with a wholehearted fight back in the space of a minute when Laura McLoone rammed home her second goal of the encounter.

This score ignited a Roscommon surge that saw them hold Leitrim scoreless for a 12 minute period as they reduced the deficit to five points as Jenny Higgins shot another goal shortly afterwards from 20 metres after a well orchestrated move.

Higgins added a 45th minute point while Leitrim fullback Mary Farrell was sent to the sin bin for ten minutes after being issued with a yellow card by referee Gerry Carmody for a foul on Shauna Connell.

Jenny Downey pointed the resulting free and when Joanne Cregg whipped over a 50th minute point from play, to cut Leitrim’s advantage to five points.

Carla La Guen coolly lifted the siege for Leitrim when she hit their last score in the contest, a 54th minute point from play but Roscommon were in the ascendancy and finished with spirited determination.

The final minutes became a nail biting experience for Leitrim and their supporters as Roscommon drove forward in a bid to force the dreaded extra time.

To their relief, Leitrim just managed to deny Roscommon a draw but it was so close. Jenny Higgins was clear through on goal but her shot went over the bar while Jenny Downey from a free to leave one between the team at the final whistle.