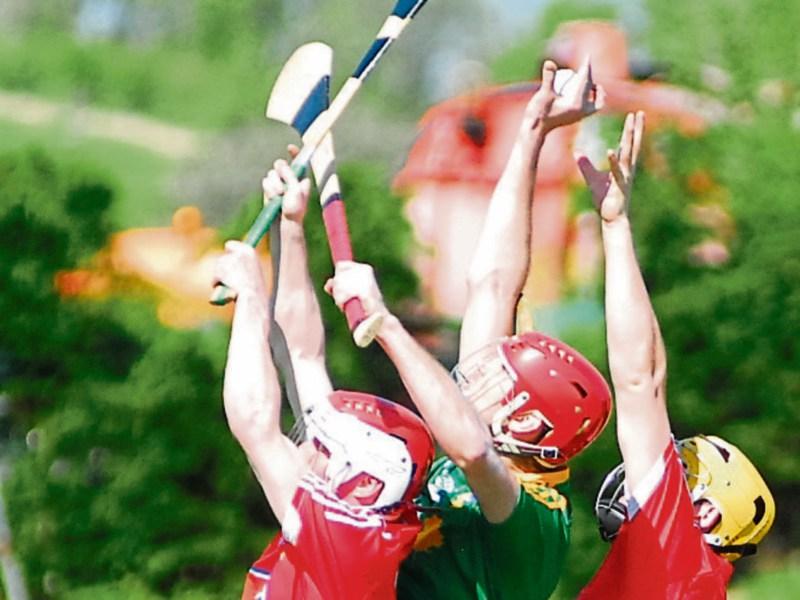 Leitrim hurlers have rarely suffered a more heart-breaking or devastating loss as they did last Saturday when they were robbed of victory in added time.

Ahead by a point as the game ticked into added time, Leitrim had produced a stunning second half display as they recovered from a four point deficit to take and defend their well deserved lead against table toppers Louth in Pairc Sheain Ui Eslin.

But just as Leitrim were within sight of the finishing line, they stumbled as Louth drew level with a successful 65 before they won the match with a score from a very unlikely score, corner-back Mark Wallace breaking upfield to fire over a long range effort.

Stunned after they saw their lead evaporate, Leitrim had one last chance to force a draw, the least they deserved after the Louth keeper spilled the sliothar over the sideline.

But in a cruel, cruel twist of fate, Clement Cunniffe just didn’t catch the sliothar after he rose the ball, the shot falling short and Louth clearing their lines as the referee's long whistle was greeted by devastated Leitrim players falling devastated to the turf.

The first failure was heart-breaking as Leitrim missed two goal chances and a host of points while the second failure saw Leitrim players unable to gather the sliothar under no pressure, often then losing the ball when the pressure was then applied.

Those moments were the difference between creating momentum and keeping Louth in the game at a time when Leitrim could have killed off the game.

Leitrim and Louth both missed chances early, Padraig O’Donnell firing wide from a 65 before Gavin O’Hagan was desperately unlucky with a deceptive shot that flew low and looked headed for the net only to bounce off the bottom of the right hand post on three minutes.

A poor O’Donnell free followed before Louth sowed the seeds of their victory with five unanswered points in an eight minute spell, Liam Dwan converting three frees, two from long range and one after Leitrim keeper Declan Molloy was penalised by the officials for over-carrying.

Dwan and Paddy Lynch both added fine points from play but crucially, a nice John Ryan point off the wing got Leitrim up and running after 14 minutes.

Clement Cunniffe then got involved with two monster points from frees, the first from the halfway line and the second from his own 65 yard line, two fantastic points.

In between, Vinny McDermott made an absolutely vital interception, batting the ball away over his head as a hand-pass headed towards an unmarked Louth attacker in front of goal.

Roger Maher and Padraig O’Donnell swapped quick frees before a crucial turning point when Louth played a long ball up to Dwan. The Louth man was pulled back and hit heavily but his shot was blocked.

Unfortunately for Leitrim, referee James Connors had been playing advantage and awarded a penalty but Leitrim keeper Declan Molloy made a stunning save, diving full length to his right to stop Paddy Lynch’s shot on 20 minutes.

Leitrim tried to hit back but Cunniffe saw a free 55 yards from his own goal caught on the Louth goal-line while Padraig O’Donnell received a yellow card for a late hit.

Leitrim were harshly penalised for steps by a defender who had appeared to be fouled, Dwan putting over the free while a Leitrim attack was intercepted and Andrew McCrave pointed.

Leitrim missed a couple of chances to close the gap before Louth sub Diarmuid Murphy received a yellow card for a wild swing with Cunniffe putting over the free.

Murphy then pointed in added time before O’Donnell converted a free to leave Louth 0-9 to 0-6 ahead at the break but Leitrim’s chances looked very slim a minute into the second half when O’Donnell received a second yellow card for a heavy hit.

Strangely that seemed to liberate Leitrim minds and the Louth keeper blocked a Liam Morahan shot before Gavin O’Hagan swept over a point after great work from Colm Moreton.

The sides were then level at 14 men apiece on five minutes when Louth's Ronan Byrne was sent off for a wild pull, a bizarre decision as the Louth centre-back struck his own player while Leitrim changed things up, Zac Moradi arrive on to give Leitrim more pace.

But Louth still looked to be cruising to the win as sub Diarmuid Murphy added two points in the space of a minute while a shot from Paddy Lynch was blocked by the Leitrim defence.

Lady luck then shone on Leitrim, a hopeful Moradi delivery bounced off the hands of a defender and fell right into the path of Gavin O’Hagan who drove the ball into the net from close range after 14 minutes to leave Leitrim a point behind.

Another sub, David Tiernan who had replaced the injured Liam Moreton, fired over a great point to tie the scores before Dwan hit back with two quick Louth points in the space of a minute.

But Leitrim had found their rhythm and a Cunniffe free was followed by a lovely O’Hagan point to tie the scores with less than ten minutes to go.

The game became a shoot-out as Moradi swept over a point, Louth's Seaghan Connolly replied before David McGovern fired over with less than seven minutes to go. Unfortunately that proved to be Leitrim’s last score as the Green & Gold missed great chances to extend the lead.

And they paid the price. Murphy fired over a 65 before Wallace proved to be the hero with a barnstorming point.

Leitrim had the chance to earn a draw, over a minute past the allocated three minutes of added time but Cunniffe’s effort fell short.