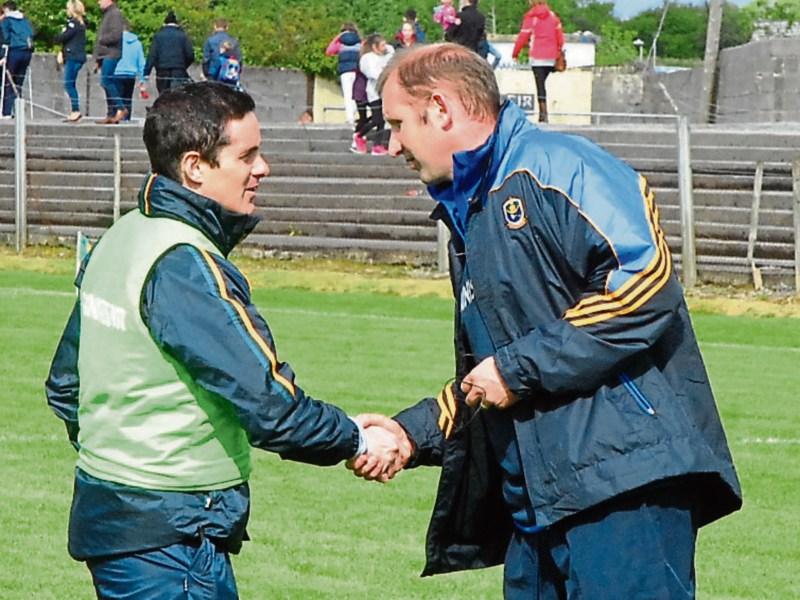 Shane Ward doesn’t normally criticise his players in public but after Sunday’s 14 point loss, the Green & Gold manager criticised the Leitrim players for what he termed “hitting the self-destruct button.”

The aftermath of a heavy championship loss is not easy to take in but the Leitrim boss chose his words carefully when the Observer put it to him that it was not a good day for the Green & Gold.

“It certainly wasn’t a Shane Ward performance out there today,” said Shane, “I’m disappointed with the lads and with the way they went about their business today. I thought we started really well and settled really well but after that, we hit the self-destruct button.

“Be under no illusion, a lot of the things that went wrong out there was down to the players themselves. We totally played hardball with Roscommon and we just needed to play our own ball. It is a bit disappointing from that perspective because they are well prepared, well tutored, they just have to go and execute.”

When it was put to him that discipline had let his side down, Shane said “That is what I mean by the self-destruct button. We settled really well and were doing really well and that is all you want in a championship game in the first 15 minutes.

“We should have been 2-0 up after missing a free kick that shouldn’t have been missed. Once you miss a couple of scores like that in a championship match, you’re going to end up being punished at the other side.

“You have to convert every opportunity you get and you have to be brave enough to take them on, you can’t be led by the hand all the time. I thought after the 10, 15 minutes, we got a bit anxious. Roscommon kicked a few scores and went four or five-one up and we didn’t kick a score or two and that just sets into the players and that has a knock-in effect.

“Discipline is one of our key performances, to have discipline at all times so why react like that today when there was no need to and we hadn’t done that before.”

The Leitrim manager was reluctant to criticise match referee Barry Cassidy but felt that Division 4 teams might not get the same crack of the whip as the bigger teams - “I think that sometimes it can be easier to make a call for the bigger team rather than the smaller team because it is less controversial from the referee’s point of view.

“I’d just be hoping that in due course, the lesser teams in Division 4 will get more respect on game days and for referees to step out and be brave and make the big call when it needs to be called.

“I thought Emlyn Mulligan came in for some very harsh treatment in the first half and there was no black cards, yellow cards or anything else,” said Shane who claimed that the Leitrim forward received a box to the face, adding “The linesman said nothing, the referee said nothing but look, that is the game, we’re used to it as well. We’re very resilient around here, we can take a lot but I’m disappointed with our discipline.”

Shane, however, felt that Darren Sweeney also suffered in that regard - “I’m not totally sure what happened, I just saw Darren walking towards me. I think it happened after the Roscommon number five stood on Brendan Flynn.

“Darren reacted to that and he got the red card and number five didn’t, that’s strange. I’m not sure if we are appealing it, we will have to take stock. That is what you are used to when you are around here.”

Looking to the Qualifiers, Shane said “We’re used to this type of situation unfortunately. My job is to try and change this situation that we don’t lose our first championship game and head straight to the qualifiers.

“We’re very much trying our damndest to change that situation, we haven’t changed it again this year but the guys will regroup, we’ll wait for four weeks for the qualifier draw and we’ll go and play the Qualifier because this is not new territory to them.

“There are positives to take in the fact that we prepared well and we executed some things reasonably well, maybe not to the naked eye from the stands but some things we did really well. But there is a lot of things there that have to be questioned.”

And Shane said that Leitrim’s recovery must be led by the players, not the management. When asked if it is going to be difficult to lift Leitrim again, Shane said “To a certain extent, I feel I have been doing that quite a lot and it is going to be up to those boys in the dressing room to do it this time.

“They are going to have to lift themselves and lift the county because there is no people putting in more work into them than the support team I have around them. When you do that and you prepare that well, you know you expect a performance every Sunday. Those guys will be disappointed of course but they have to step up now, it is a real, real challenge for them so it will be really, really interesting to see how they bounce back.”