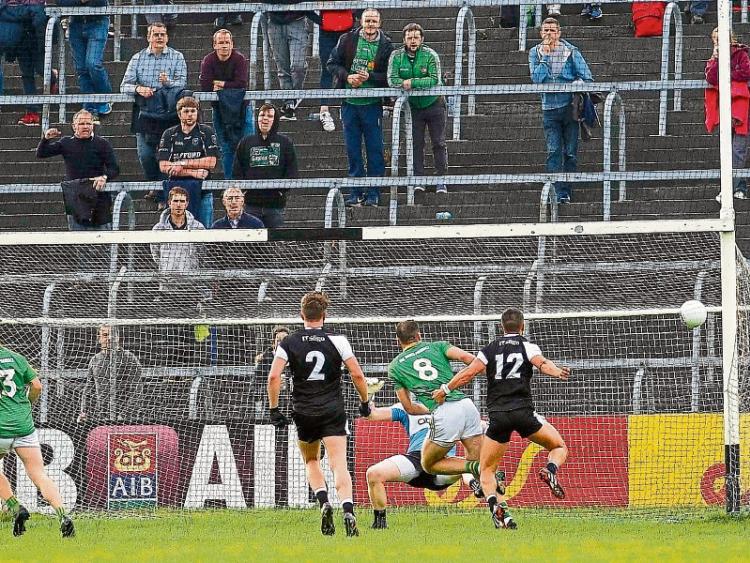 The prospect of a third ever qualifier win and for the first time a second qualifier win in the one year meant Leitrim fans travelled to Markievicz Park in the hope that what has been a year full of disappointment and frustration could yet turn into one in which the management, players and supporters could point to real signs of progress.

Unfortunately once the game got underway that never looked like materialising as Sligo, with the wind at their backs, took the game to Leitrim in the opening stages and quickly built up a lead that never looked as though it would be threatened.

Fingers of blame will be pointed at the players for the manner in which they performed and the management for the performance delivered by the players under their guidance but in reality at this stage the blame game will do no favours for anybody associated with Leitrim football. Now, more than ever, unity is needed within the team and within the county.

Speaking to the players and the management after the game, the sense of frustration and disappointment was palpable. They didn’t go out to perform as badly as they did and when speaking after the game they struggled to pinpoint exactly why it went so wrong. They were however, all in agreement that positive steps are being made and that progress, must be continued in the years to come.

The opening stages should have seen Leitrim impose themselves on the game but they showed their opponents, who they have an excellent record against in recent years, far too much respect.

James Hynes was fouled as he shot and Mark Breheny effortlessly converted the resulting free. The lead was doubled when Breheny converted a second free three minutes later, although this time it was from a much tougher angle.

Leitrim’s first foray into the Sligo half resulted in their opening score when Emlyn Mulligan converted a free.

When looking for decisive moments in the game perhaps the first of those arrived in the eighth minute when Neil Ewing made a wonderful block to deny Kevin Conlan, who had done very well to engineer a shooting position for himself. What happened next was indicative of how the afternoon would transpire from a Leitrim point of view as Sligo counter-attacked with pace and purpose and Brian Egan was on hand to score a fine point for the Yeats County.

Although named at midfield, Niall Murphy was operating much further forward for Sligo and his opening half performance went a long way towards ending the Leitrim challenge. After a period of quick passing through the middle of the pitch, in which Adrian McIntyre was heavily involved, Murphy was on hand to score his side’s fourth point of the game.

Leitrim were living off scraps at this early stage but they were presented with a brief sight of goal when Sligo goalkeeper Aidan Devaney was caught out of position. A loose ball broke kindly for Donal Wrynn who, for a split-second, had an unguarded goal to shoot at, but when he opted to run closer to goal he quickly found himself surrounded by black and white clad defenders and he was ultimately penalised for taking too many steps.

Sligo extended their lead to four points in the 13th minute and once more from a Leitrim point of view it was a preventable score. Niall Murphy was found by Adrian Marren and with two defenders for company Murphy retreated. The Leitrim defenders seemed to think the danger was gone as neither moved to tackle and Murphy took full advantage of the hesitancy to point from distance.

Three minutes later Murphy tormented the Leitrim defence once more. After receiving a diagonal pass from Keelan Cawley he beat three defenders far too easily before slotting his shot over the bar.

The lead was extended to six points shortly afterwards when the Leitrim defence was marked absence after a searching ball from Kyle Cawley found Mark Breheny who pointed easily.

With Leitrim obviously in real trouble Niall Woods was sprung from the bench in a bid to shore up the defence and to his credit his presence seemed to have a settling effect on the team. The most difficult decision for Shane Ward was arguably who the unfortunate player would be that would be called ashore first. Ultimately it was James Rooney that was replaced but several others may well have thought their time was up.

A pointed free from Mohill’s Ronan Kennedy was cancelled out by a point from Kevin McDonnell which was far too easy. The full-back burst past Leitrim tacklers as if they weren’t there before pointing.

After a foul on Thomas Mulvey, Emlyn Mulligan pointed to leave five points between the sides and that was quickly followed by Leitrim’s first point from play which arrived in the 25th minute from the boot of Donal Wrynn.

However, that was not to signal the start of a Leitrim revival as Sligo hit back with four unanswered points with two each coming from Adrian Marren (one free) and Niall Murphy.

There was to be one final chance in the opening half and it was one that Leitrim would ultimately rue as Donal Wrynn hit the Sligo upright.

Leading 0-12 to 0-4 as the second half got underway, Sligo had an opportunity to all but end the game as a contest within 30 seconds of the restart but James Hynes succeeded only in knocking the ball over the bar when he had just Brendan Flynn to beat.

Leitrim enjoyed plenty of possession in the second half and a number of the substitutes made telling contributions when they were introduced but in reality the second half proved to be a non-event with it becoming increasingly apparent that the game was over as a contest.

Emlyn Mulligan converted two frees either side of an Adrian Marren 45 for Sligo but 14 minutes into the second half Leitrim were dealt another blow when Sligo pounced for the game’s opening goal.

Leitrim were asleep to a quick sideline ball which was taken by Cian Breheny and when given the ball Kyle Cawley had the freedom of the park and the corner forward ran through on goal before shooting to the Leitrim net.

The Leitrim response again saw the green and gold enjoy plenty of possession but they only had points from Nevin O’Donnell and Conor Gaffney to show for their efforts.

With Sligo leading by nine points there didn’t seem to any belief among Leitrim supporters that a comeback was possible or fear amongst the Sligo contingent that a collapse was imminent.

A Mark Breheny point from distance further extended the Sligo lead before Nevin O’Donnell got his fist to a wayward effort that he deflected over the bar.

Unfortunately the game was to end once more with Leitrim facing a numerical disadvantage as captain Gary Reynolds was shown a black card but this had absolutely no bearing on a contest that was long over.

Darren Sweeney scored what appeared to be a late consolation point for Leitrim but it was to be Sligo who would have the final say in proceedings as in the fifth minute of injury time they struck for a second goal.

Cian Lally fully exploited the gaps in the Leitrim defence as he released Darragh Cummins who finished confidently past Flynn to compound a miserable day for all associated with Leitrim football.