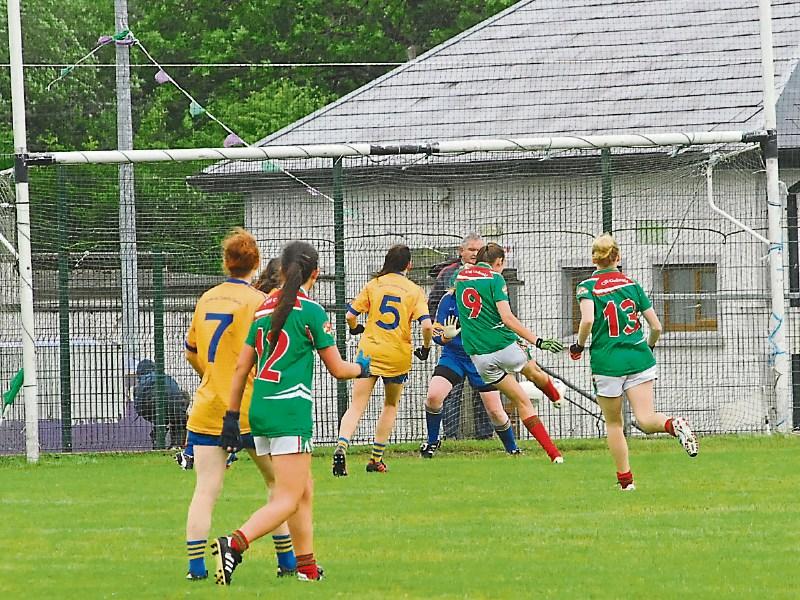 Defending Champions Kiltubrid ensured it was a baptism of fire experience for Leitrim senior championship debutants, Glencar/Manor at the Leitrim Gaels pitch on Sunday when hamming the North Leitrim women by a whopping 18 points.

Kiltubrid grabbed a 0-3 to 0-1 lead in the opening eight minutes with Áine Tighe, Michelle Guckian (free) and Kelly O’Brien all scoring. The North Leitrim side found it difficult to settle down in the first quarter as they hit three bad wides while Kiltubrid registered just one.

Aoife Gilmartin got Glencar/Manor’s account opened with a 20th minute point from play. But Aoife McWeeney kept Kiltubrid’s grip on exchanges tight when two minutes later she replied with another point.

During the next three minutes Glencar/Manor had their best period in the first half when Siobhan Feely pointed twice.

However Kiltubrid pulled further ahead before the break with Michelle Guckian and Siobhan Kelly firing over a point apiece.

Glencar/Manor keeper Natasha McEnroy made a fine save at the end of the half to deny a Siobhan Kelly goal chance. At the interval Kiltubrid led by 1-7 to 0-3.

After the restart a Kiltubrid goal bound effort that was shot by Aoife McWeeney hit the post and was cleared.

Feely kept the score board ticking over for Glencar/Manor when she replied with a 38th minute point from play. But Áine Tighe replied a minute later with a Kiltubrid point from out on the wing.

Glencar/Manor won a 41st minute penalty when Orlaith Kelly was taken down. Kelly stepped up to the mark and fired her effort well wide of Miranda Burke, as she reduced Kiltubrid’s advantage to 0-4.

But within the space of a minute Áine Tighe replied with a point at the other end while Marie Clerkin answered with a 44th minute Manor point from play.

Glencar/Manor now trailed by three points with the final quarter of the game to be played. But Kiltubrid upped their game in this period in which they held the North Leitrim side scoreless when adding 4-2 without reply.

Emma Guckian shot a 49th Kiltubrid minute point from play as her side began to kill off Manor’s fight back. A minute later Marie Clerkin drove a goal chance wide for the North Leitrim side that seemed to completely run out of steam after this.

Emma Guckian finished a well-worked 52nd minute Kiltubrid goal to the Glencar/Manor net and a minute later her name sake Michelle converted a free that edged the South Leitrim side into an 0-8 lead.

Michelle Guckian speculative 56th minute sideline kick from 47 metres outbrought Kiltubrid’s goal tally to four for the game when the ball dropped under the Glencar/Manor crossbar at the last second.

Áine Tighe added another Kiltubrid goal two minutes later when she sent in a ball from long range that hopped over the head of advancing Glencar/Manor ‘keeper Natasha McEnroy.

Before the end Glencar/Manor ‘keeper Natasha McEnroy pulled off a good save to deny an Aoife McWeeney goal chance. But McWeeney made no mistake shortly afterwards when she fired home Kiltubrid’s sixth and final goal of the afternoon.