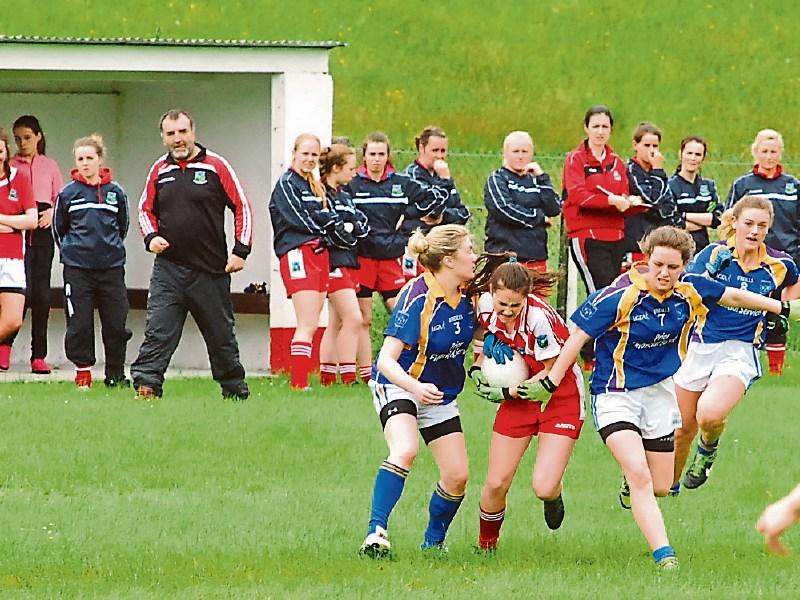 In difficult conditions Dromahair made an impressive start to their Ladies Senior Championship campaign as they proved too strong for Aughawillan in Ballinaglera last Sunday.

All over the pitch Dromahair proved too strong for their opponents but will still feel there is room for improvement. What was particularly impressive was the manner in which Dromahair were always able to respond emphatically whenever Aughawillan appeared to be threatening to bring themselves back in contention.

Aughawillan, traditionally the powerhouse of Ladies football in Leitrim, will be disappointed with their opening outing but they will no doubt be confident they can improve significantly in the coming weeks and they will still expect to have a strong say in the ultimate destination of the Ladies Senior Championship title.

Anna Conlan opened the scoring for Dromahair from a second minute free but that was quickly cancelled out by an excellent point from Aileen Maguire after good work from Eimhin Quinn.

Dromahair regained the lead following a well worked move involving Mary Farrell, Edel Kelly and Edel Fowley and it was Sinead Fowley who applied the finish the move deserved.

The lead was stretched to two points after another good passing move through the heart of the Aughawillan with Edel Kelly pointing on this occasion.

Aughawillan hit back with a Carla LeGuen point in the 12th minute but already Dromahair were beginning to gain the upper hand, particularly in midfield where the partnership of Anna Conlan and Sinead Fowley was proving too good for Aughawillan.

Dromahair then hit four unanswered points with Conlan, Roisin Fowley (two) and Sharon Kelly all on target. Roisin Fowley's second point of the game was a impressive one from a team perspective as the move that led to the score began with Roisin Daly clearing the ball off her own line before beginning a passing move that Aughawillan had no answer to.

Aughawillan hit back with a pointed free from the trusty boot of Aileen Maguire but that score proved to be little more than a temporary reprieve as Dromahair's Roisin Fowley struck for the game's opening goal with nine minutes of the opening half remaining.

To their credit Aughawillan responded well and the teams exchanged two points each before Roisin Fowley added to Dromahair's lead with another point.

However, Aughawillan, showing the resilience they are known for hit back quickly with a goal of their own, courtesy of Mary McKeon, to leave just five points between the sides.

That goal served only to fire up the Dromahair players who went up another gear in the closing stages of the half as they hit five unanswered points in quick succession.

Aughawillan's Caoimhe Gaffney scored the final point of the half but already it was looking like an uphill challenge for Aughawillan who trailed 1-6 to 1-15.

Dromahair would no doubt have been looking to start the second half in the same determined fashion and ensure Aughawillan were not given an easy route back into the contest and a goal barely two minutes into the second half helped ensure there would be no dramatic comeback.

Carla Le Guen scored a fine point, under considerable pressure, five minutes after the restart, but that score was soon wiped out as Dromahair struck for their third goal of the contest. The ball was worked well through the defence with Mairead McMorrow and Edel Fowley both making telling contributions before Joice Cunningham released Roisin Fowley who finished emphatic for her, and Dromahair's third goal of the game.

Aileen Maguire hit back with a goal for Aughawillan while moments later Aughawillan had an opportunity to further reduce the deficit the Dromahair goalkeeper Niamh Kelly was on hand to save Maguire's penalty.

Aughawillan could have been forgiven for thinking it wasn't going to be their day when a minute later Aileen Maguire saw a goalbound shot deflect off Aine Vesey before hitting the crossbar and going over the bar.

Another Maguire point did reduce the deficit to nine points but Dromahair soon hit back to deflate the Aughawillan revival. After Joice Cunningham was fouled Anna Conlan took responsibility for the penalty which she placed perfectly to the corner of the goal.

Augahwillan replied with another Aughawillan point but as the wind picked up and the rain began to drive down on the players, Dromahair lifted the intensity once more as they scored 1-3 in the space of three minutes with the team's fifth goal coming from Sharon Kelly after some incisive passing between Edel Kelly, Joice Cunningham and Edel Fowley.

Aughawillan kept going until the end but there was to be no denying this was to be Dromahair's day as they laid down an early championship warning to all other teams in the competition.