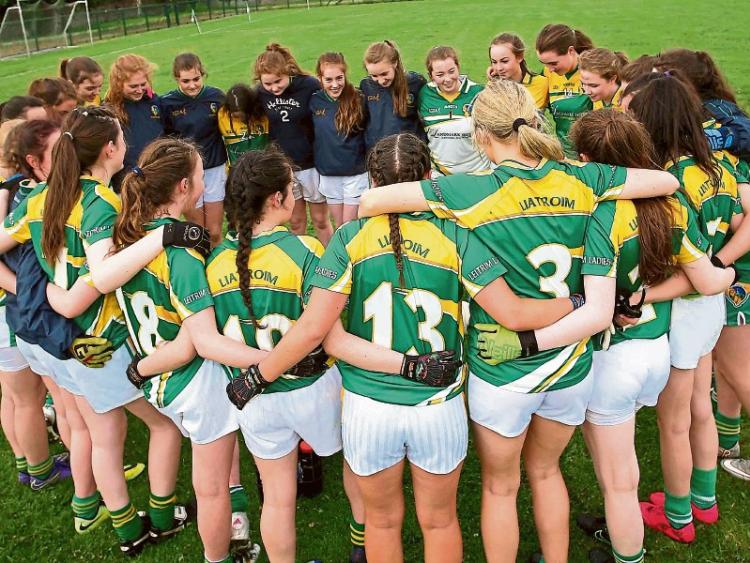 A four point winning margin may seem like a relatively straight forward victory for Derry but it doesn't come close to telling the story of a pulsating Ladies U-16 All-Ireland C Championship semi-final.

Leitrim seemed to have weathered the challenge presented by the elements and a determined Derry in the opening half as they took the game to their opponents in the second half and seemed to be on course for victory only to be pipped at the very death.

The game began with Derry doing most of the attacking and with the wind at their backs they dominated the opening 10 minutes of the encounter.

However, a number of poor wides and an excellent block from Sara Crowe to deny Derry captain Erin Doherty meant after 10 minutes, there was still nothing to report on the scoreboard.

After a slow start, Leitrim came roaring into the contest when they pounced for the game's opening score, a well worked team goal, finished off by Dearbhla Rooney.

Niamh Donegan showed good awareness to deliver a sideline ball to her midfield partner Aoife Gilmartin who then injected some pace in to the attack as she ran at the heart of the defence. Approaching the ball, she calmly squared the ball to the unmarked Rooney who had the simple task of dispatching the ball to an empty net.

Having been unable to score up to that point, Derry hit back immediately with a Leah McGonagle point but Leitrim were beginning to look a more assured outfit and hit back quickly with a point from Emma McLoughlin.

The Leitrim lead could in fact have been greater but Aoife Gilmartin was unlucky to see her shot hit the angle of post and crossbar and Derry goalkeeper Leonie McIlroy saved the rebound from Roisin McGrenaghan.

Derry continued to have chances of their own and a quick counter attack should have seen them score their first goal of the game but Leah McGonagle's effort went harmlessly wide.

Dearbhla Rooney extended the Leitrim lead to four points when she converted a free before the game once more burst into life for the final 10 minutes of the half.

Three points in quick succession from Derry's Lauren Crozier, Niamh McIlroy and Eve Diamond reduced the deficit to just a point and moments later Derry pounced for their first goal to take the lead for the first time. Clodagh Curran saw her shot crash off the Leitrim crossbar but Aoife Collins was on hand to dispatch the rebound to the goal.

Leitrim responded perfectly to that setback as Dearbhla Rooney ran straight at the heart of the Derry defence before unleashing an inch perfect shot to the top corner of the goal.

The first half scoring was brought to an end by Derry's Erin O'Neill who pointed to level matters.

There was a sense of determination about the Leitrim players as the second half got underway and within a minute of the restart the Green & Gold came agonisingly close to scoring a third goal but Caoimhe Gaffney's shot was well saved by Leonie McIlroy.

Roisin McGrenaghan did however, point a minute later after good approach play between Aisling Leahy and Niamh Donegan to give Leitrim a slender 2-3 to 1-5 advantage.

Both sides had goal chances come to nothing before Derry drew level once more courtesy of a converted free from Eve Diamond and a point from Niamh McIlroy.

Just when it seemed as though Leitrim were beginning to sit too deep in an attempt to withstand the Derry pressure, Leitrim replied with an excellent individual goal scored by Dearbhla Rooney after she drilled a left footed shot to the Derry goal despite the close presence of a defender.

It didn't take long for the Derry reply as after a Lauren Crozier shot was blocked by Jasmine Maye, Derry captain Erin Doherty then shot from distance. The shot alluded defenders and goalkeeper alike and found its way to the Leitrim net. That score was quickly followed by a Derry point, with Eve Diamond on target, to give her side a two point advantage - 2-8 to 3-3.

This proved to be a significant period of the game as Leitrim captain Niamh Donegan was then issued with a yellow card and sent to the sin bin for 10 minutes after what appeared to be a relatively innocuous challenge.

It was to get worse for Leitrim as Erin O'Neill struck for a goal and a point in quick succession meaning Leitrim trailed by six points with a quarter of the game left.

However, the Leitrim players showed they are a resilient bunch as a Caoimhe Gaffney point was quickly followed by a Dearbhla Rooney shot that was dispatched low and hard to the Derry goal meaning there was just two points between the sides with eight minutes remaining.

Although Derry helped calm the Leitrim storm with an Erin O'Neill point, Leitrim sensed the game was still in the balance and a place in an All-Ireland final was still to be won.

With a minute remaining, Emma McLoughlin was on the end of a good passing move and rifled a shot to the Derry net before in the 60th minute Leitrim regained the lead when Roisin McGrenaghan pointed.

Unfortunately, during five minutes of injury time Derry were to stage a great escape as Eve Diamond and Lauren Crozier grab late goals to break Leitrim hearts despite a late point from Dearbhla Rooney.