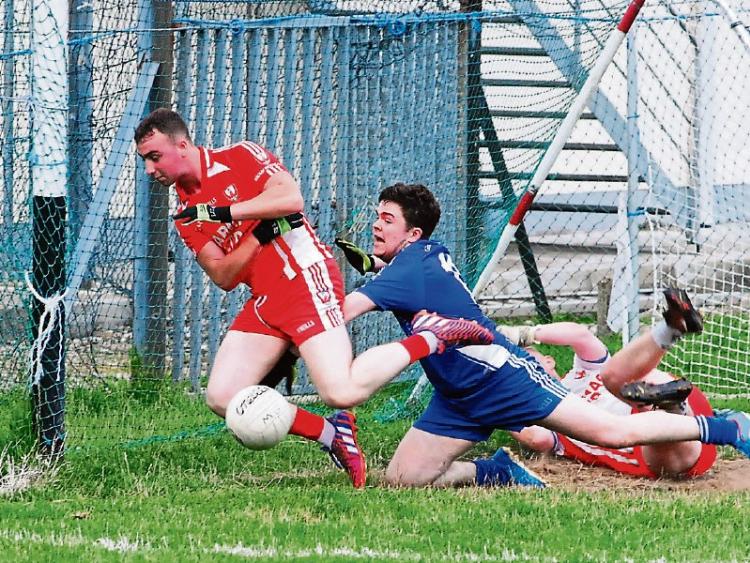 Two goals in the space of a minute from James Clancy just before halftime proved the winning for Dromahair of last Wednesday’s exciting and entertaining U21 B Final in Drumkeerin.

At the time, Melvin Gaels looked as if they were going to romp home as they led by five points but two brilliant breakaway goals from Clancy turned the game on its head and set a dominant Dromahair on the road to victory.

Dromahair should have won this north Leitrim battle with a good deal more comfort as their potent attack looked dangerous every time they got the ball but an exceptional performance from Melvin Gaels keeper Eoin Gallagher denied them time and time again.

Throw-in a never-say-die attitude from Melvin Gaels who almost rescued a draw in injury time when Darragh Rooney blazed a goal chance over the bar and it made the game a real treat for the spectators in St. Brigid’s Park.

There were outstanding performances on both teams but the greater strength in depth and spread of threat was key for Dromahair - their defence held firm under pressure with Enda Fowley and Caillin McLoughlin outstanding while upfront, Gary Fowley, Martin Feeney and James Clancy were real threats.

Melvin Gaels had stars with Darragh Rooney a real gem and Cillian McGloin, Padraig Sheridan and Jamie Curran but it was the absence of Liam Ryan that the Gaels most felt as they definitely missed his presence in defence.

Melvin Gaels opened the scoring with a Matthew Cleary free but Dromahair had the better of the early exchanges with points from Gary Fowley (free), James Clancy and Bertie Cunningham while Eoin Gallagher twice denied Dromahair goal chances.

Melvin Gaels did threaten a goal when an Edward Gallagher shot was spilled by keeper Jack Burke but defender Caillin McLoughlin made a fantastic goal saving clearance, scooping the ball off the line ahead of Taylor Simpson.

The Gaels didn’t wait long for a goal as a Cillian McGloin run released Rooney and his fisted pass across the goal was palmed to the net by Cian Brennan. Martin Feeney and Rooney swapped points before Eoin Gallagher made another great save to deny Martin Feeney.

Another brilliant McGloin run released Rooney who drilled a shot to the net on 19 minutes but barely a minute later, Dromahair broke out of defence, Robbie Cunningham feeding Gary Fowley who broke through a tackle and drove a great shot to the net.

Dromahair’s players looked despondent but the game turned on its head with James Clancy scoring a well worked point before he collected a sideline ball, beat his man and drilled a great shot to the net.

Clancy wasn’t finished as a quick pass from Martin Feeney after the kickout released him for a second goal and suddenly Dromahair led 3-5 to 2-6 at the break.

The second half was no less exciting - Robbie Cunningham pointed inside the first minute while Gary Fowley was denied a goal by another Gallagher save, Robbie Cunningham sending the resulting 50 about five yards over the crossbar with a monster kick.

Melvin Gaels’ Jamie Curran hit back with a fine point on three minutes but Gary Fowley’s monster 40 yard effort showed that Dromahair were well on top, Fowley adding a free a minute later as the lead stretched to five points.

Cillian McGloin soloed through for a point but Eoin Gallagher again saved his team at the other end with a great save while the follow-up hit the woodwork before Bertie Cunningham did point.

However, Dromahair needed Jack Burke to make an excellent save from Cillian McGloin while Eoin Gallagher again denied Gary Fowley a goal, the ball going out for a 50 that Robbie Cunningham again sent flying high over the bar.

Gary Fowley added a point as Dromahair now led by seven points but with 12 minutes to go, they were rocked when great work from Jamie Curran and Declan Clancy eventually got the ball to Matthew Cleary who blasted home from a tight angle.

Dromahair’s response was equally impressive as they took advantage of Melvin Gaels pushing for another goal, a long ball out of defence finding Robbie Cunningham clear and he dribbled the ball through to slot the ball to the net.

Cillian McGloin almost grabbed a goal back, his shot hitting the crossbar but Martin Feeney replied with a lovely point with six minutes to go.

Melvin Gaels refused to lie down and Darragh Rooney drove a powerful shot just over the crossbar and they incredibly gave themselves an unlikely lifeline when Matthew Cleary audaciously drove a 14 yard free from a tight angle to the top left hand corner of the Dromahair net.

That left Melvin Gaels just a point in arrears and when Cunningham missed a long free, the Kinlough men drove forward. A block on Padraig Sheridan’s shot saw the ball come to Darragh Rooney but his powerful shot had just a little too much air on it as it flew over the bar.