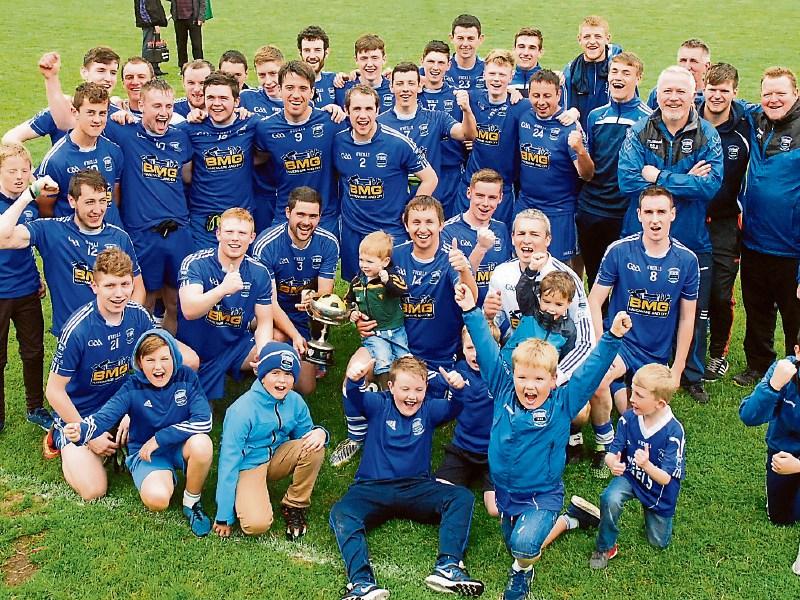 With Championship season just around the corner, Melvin Gaels showed they appear to be coming to the boil at just right the time as they comfortably saw off the challenge of Leitrim Gaels to claim the Swan Bar Division 4 title on Sunday last.

The opening 10 minutes proved to be competitive but after that it was very much one way traffic with Melvin Gaels able to fully utilise their substitutes bench in the second half of what proved to be a very one sided encounter.

The likes of James Bredin, Tom Lipsett, Leo and Liam Ryan and Stephen McGurrin were all on top form and proved too good for Leitrim Gaels who, apart from a bright beginning and a spirited finish weren't able to contend with the Kinl0ugh men.

Melvin Gaels deserve every credit for the comprehensive manner in which they emerged victorious but as a contest this encounter was a non-entity with victory assured long before the half time whistle sounded.

Leitrim Gaels began brightly and asked several questions of the Melvin Gaels defence during the opening 10 minutes. Leitrim Gaels opened the scoring when Luke Donnellan converted a third minute free after a foul on Stephen McDermott and two minutes later they came very close to finding the Melvin Gaels goal but Michael McManus' shot was dragged wide of the goal.

With Melvin Gaels making a very slow start to the game Leitrim Gaels were presented with another sight of goal in the sixth minute but Stephen McDermott's shot was saved by Pat Gallagher.

Having been under plenty of pressure, Melvin Gaels suddenly woke up and were to boss matters as superior fitness levels and ball playing skills began to pay dividend. Six unanswered points from Tom Lipsett (two), Matthew Cleary (free), James Bredin and Paul Simpson (two, one free) helped open up a lead that Leitrim Gaels never really looked like overturning.

With Melvin Gaels now totally dominant in midfield and most other parts of the pitch, Leitrim Gaels were presented with a sight of the Melvin Gaels goal ten minutes before the interval but Pat Gallagher comfortably saved a fisted effort from Donal Scollan.

Melvin Gaels further extended their lead with points from Matthew Cleary and Stephen McGurrin before the game was all but ended when Melvin Gaels pounced for two goals in as many minutes in the closing stages of the half.

After receiving the ball back from Paul Simpson, Philip McGowan delivered a perfect ball in the direction of Tom Lipsett and with the defence carved open, the full-forward dispatched his shot past Mark Chandler.

The Leitrim Gaels players were understandably longing for the interval but Melvin Gaels were not finished yet as moments later Lipsett was hauled down and Paul Simpson emphatically scored the resulting penalty to give his side a 2-8 to 0-1 half time lead.

The number of substitutes introduced during the second half gave the game a feeling of a challenge match rather than a league final as the only addition to the scoring in the first 13 minutes after the restart were frees converted by Paul Simpson and Luke Donnellan.

When Paul Simpson received the ball over 20 metres from goal with ten minutes to go, it was immediately clear what his intentions were and he blasted the ball, low and hard past Mark Chandler and that as soon followed by goal number four, scored by Jamie Curran.

Leitrim Gaels kept persevering until the end and were rewarded for their efforts with points from Ricky Wynne (free), Brian McElgunn, Thomas Harden and Paddy Flynn but they were no more than consolation scores.