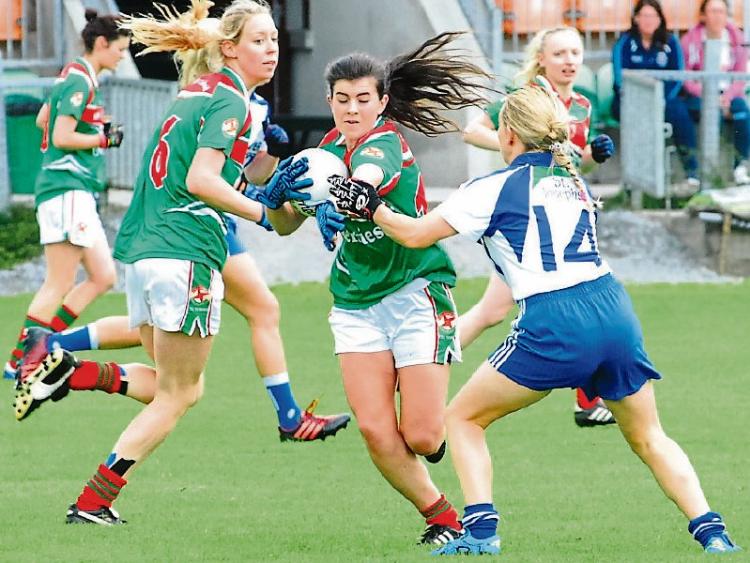 In a game that nobody deserved to lose, St. Joseph’s held off a ferocious Kiltubrid challenge in a game that hung on a knife's edge.

Perhaps a better way of putting it is both teams deserved to win, neither deserved to lose and the cliche of a draw would have been the fairest result was never more true but credit St. Joseph’s incredible will and self-belief to emerge with an incredibly hard fought victory.

This was a game that swung one way and then the other, back again and then back once more and even an incredible nine and a half minutes of added time produced a goal for each team, two huge booming points for Michelle Guckian and a couple of bad wides in a dramatic finish to the game.

Both teams looked well equipped to challenge for the title but St. Joseph's topped the group thanks to this victory.

Kiltubrid opened well despite two Michelle Guckian wides and Emma Guckian and Aoife McWeeney fired over in the first seven minutes, Aine Heslin and Carmel McGovern scoring good points before Aine Tighe soloed through to fire over the bar.

From the kickout, the ball was returned right back to the square where Aine Tighe got the vital touch to send to the ball to the net, a lead increased when Niamh Tighe’s shot skimmed the crossbar after good work from Emma Guckian.

St. Joseph’s looked in trouble but the response was impressive with Bronagh O’Rourke (free) and Aine Heslin pointing before Deirdre Moran turned her defender, ran in and drilled a low shot to the far corner on 17 minutes.

Shannen O’Rourke, Aine Heslin and Moran would add points as St. Joseph’s opened up a three point lead while Miranda Burke cleared a Michelle Heslin shot. But Kiltubrid fought back before halftime with Aine Tighe (free) and Michelle Guckian on target.

Kiltubrid almost goaled before halftime when Tighe created a goal chance only for a heavy challenge to put off Guckian as St. Joseph’s led 1-7 to 1-6 at halftime and Kiltubrid started where they left off, Kiera Masterson making a great save to deny Guckian a goal after good work from Tighe.

Deirdre Moran & Bronagh O'Rourke pointed either side of an Aoife McWeeney score but an unmarked Aine Tighe found Kelly O'Brien for a easy goal seven minutes into the second half and a one point lead.

Tighe and Carmel McGovern swapped points while the teams started to miss good chances and it was tit for tat as Aine Tighe and Bronagh O'Rourke both twice pointed but Kiltubrid looked as if they would hold out.

But all that changed when a hop-ball was won by St. Joseph's, they quickly worked the ball into to Bronagh O'Rourke who clinically finished inside the near post.

Emma Guckian had a shot scrambled clear before Michelle Heslin scored a huge point on the run. Aine Tighe almost goaled when she ran half the length of the field but dragged a shot wide but as the game went into added time, Michelle Guckian scored two monster points to leave just one point between the teams.

The drama wasn't over the ball spilled from the grasp of Miranda Burke, Bronagh O'Rourke winning the ball back. The chance seemed gone but O'Rourke found Carmel McGovern who produced an incredible chip to the top left hand corner of the net.

That surely was it but from the kickout, Kiltubrid got the ball and despite three or four defenders around her, Aine Tighe drove a bullet low to the bottom right corner.

That was over four minutes into added time but still the clock ticked on for another five minutes. Kiltubrid looked for an equaliser but it was St. Joseph's who were missing chances before the long whistle finally sounded.