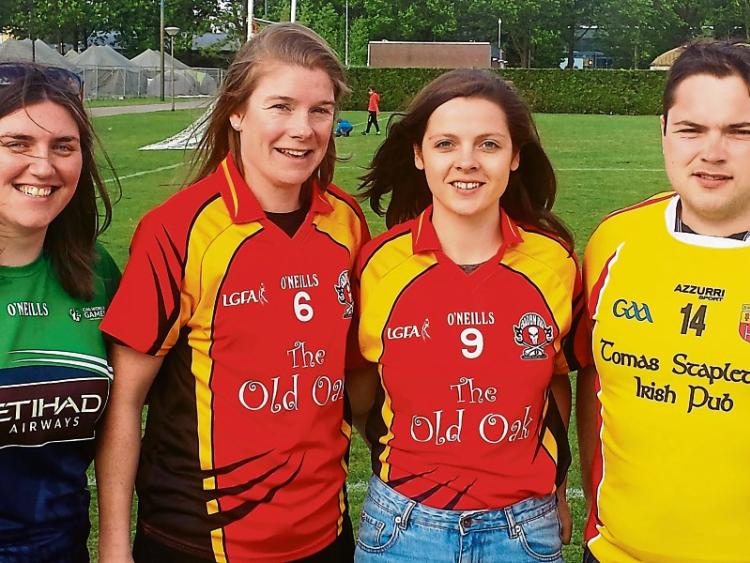 The Club championship and the progress of the county ladies team may be on the mind of most Leitrim folks at the moment but over in Europe, the thoughts of Leitrim folk are very much on matters European and it is not the Brexit.

With the GAA providing a vital social outlet for Irish people scattered all over the world, it is no surprise to learn that three Leitrim native recently met up in Eindhoven in the Netherlands at a Benelux Regional Football Tournament.

Bornacoola’s Marie Therese Dockery met up with Dromahair’s Eimear O’Neill and Drumshanbo’s Jack Matthynssens while they were joined by a fellow Connacht native from Boyle, Marla Candon.

Marie-Therese, no more than fellow Bor Feargal Mac Giolla is GAA Headquarters in Croke Park, is making a name for herself in GAA administration as she is the Secretary of the European County Board.

Her remit, in what is a purely voluntary role, includes overseeing all 85 GAA clubs spread across Europe and sees the Bornacoola woman travel all over the continent organising various tournaments and competition.

Eimear O’Neill plays her football with Craobh Rua Belgium who are based in Brussels while Jack Matthynssens lines out with the Earls of Leuven from Leuven in Belgium.

Boyle native Maria Candon also lines out with Craobh Rua Belgium and as well as playing with Belgium in tournaments right across Europe, Marla is also busy coaching a native ladies’ football to compete in the Etihad Airways GAA World Games which take place next week (7-14 August) in UCD.

The team is made up of non-Irish born players from across Europe and is one of two such ladies’ teams representing Europe in the Games!

And in more World Games news, JJ Keaney, another “local” from St. Michael’s in north Roscommon and now living in Madrid, will manage the European Irish (ex-pat) Men’s Football team.

JJ, a member of the Madrid Harps club, is the Board’s current Club Development Officer and an active referee.

The World Games will have 14 teams from around Europe competing, six of these are “county” teams and so will be hoping for some success in what should be a great occasion for all involved! And the Leitrim flag will no doubt be proudly flying.