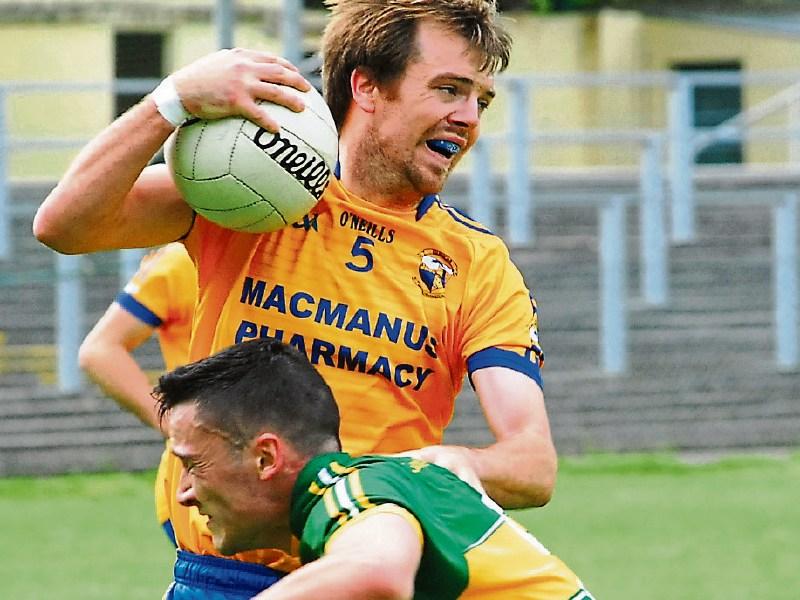 A sharper Glencar/Manorhamilton had a comfortable win over a lively Gortletteragh side in Sunday’s reasonably entertaining clash at Páirc Seán Mac Diarmada.

Gortletteragh settled down quickest and were well on top in the opening six minutes. Cathal Quinn gave Gortletteragh the lead when he fired over the game’s opening score a 3rd minute point from play.

While Manor made a slower start to the game they took control of it with a bang after Conor Dolan put over a 7th minute free.

Glencar/Manor took the lead a minute later when Anthony McDonald shot over from play and it proved to be a lead they never subsequently surrendered.

Following McDonald’s score, Manor increased their advantage with a further five points by the 18th minute. In this period, Conor Dolan shot two points, one from a free when he punished a foul on Anthony McDonald while his other score was a fisted effort.

Aaron Hickey got on the score sheet when he put over two 45 metre frees and Brian McDonald pointed from play for the north Leitrim men.

Gortletteragh, who had not scored for all of 20 minutes, replied with a well-hit Colm Duffy long range point. Conor Dolan restored Manor’s six point lead when he put over a 24th minute free.

Gortletteragh put in a strong finish to the first half and reduced the north Leitrim side’s lead to three points when Kevin McGrath hit over two well-executed points from distance and Cathal McCrann tapped over a free.

Glencar/Manor led by 0-8 to 0-5 at the interval. In the opening five minutes after the restart, the north Leitrim side stretched their advantage with three unanswered points as Anthony McDonald, Darren Sweeney and Brian McDonald shot a point each.

Cathal McCrann in reply hit over a 37th minute 45 metre free to keep Gortletteragh in contention and Glencar/ Manor had a let off a minute later when Evan Ward drove a goal chance wide and the score that killed off Gortletteragh came in the 41st minute.

Gerry Hickey drove a shot to the net for the game’s only goal after a Conor Dolan chance was blocked and the rebound came to Hickey. This score put Glencar/Manor eight points up with 19 minutes left.

Gortletteragh reduced the deficit by two over the next seven minutes when McCrann put over a 13 metre free and Cathal Quinn fired over from play despite the close attention from three defenders.

However, in response to the mini Gortletteragh rally, Manor shot two points by the 50th minute, to restore their lead to six again. Conor Dolan pointed from play and Aaron Hickey’s well hit 47 metre free split the Gortletteragh posts.

Gortletteragh had a let off when Anthony McDonald drove a 41st minute goal chance wide but Killian McGriskin and Ronan Flynn, a late replacement for the injured James Glancy, increased Glencar/ Manor’s lead over the next five minutes with a point apiece.

Gortletteragh outscored Manor in the dying minutes of the game. McCrann put over a point from a free for them while sub Mark Duignan shot the contest’s final score, a point from play, Aaron Hickey scoring in between the two points.