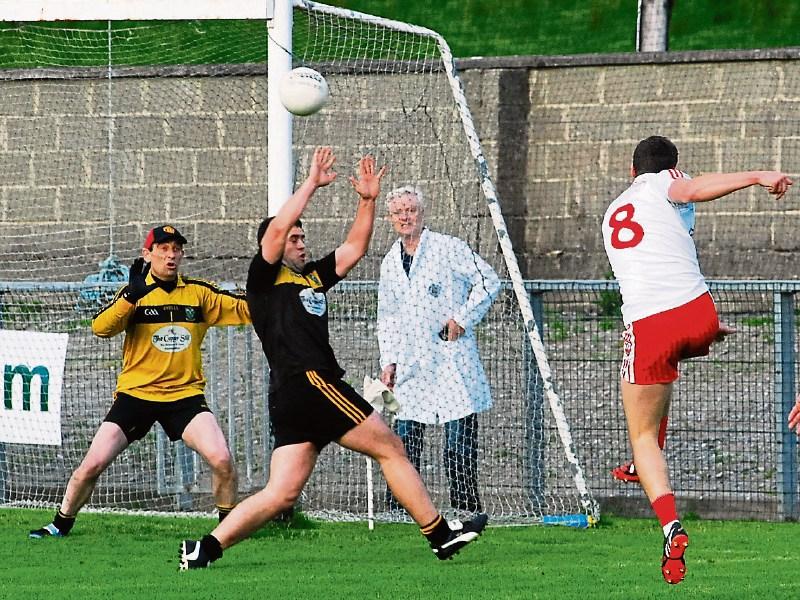 Dromahair got their Senior Championship campaign off to a winning start when in Ballinamore on Saturday evening last and while it would be difficult to argue they didn’t deserve to win, it was a game they could have easily lost.

Paddy McGowan was particularly influential in the early stages of the game winning the throw-in at the start of the game before releasing Robbie Cunningham who shot wide. From the resulting kick-out McGowan again won the kick-out and found Cunningham but again the Dromahair forward was off target with his shot.

Dromahair were punished for those early misses with Philip Howard opening the scoring with a well taken point and Bornacoola doubled their advantage when Trevor Howard converted a free.

There was no sign of panic among the Dromahair players who continued to look bright with some excellent off the ball running cause all manner of problems for Bornacoola. Three points in four minutes from Robbie Cunningham, Declan Fowley and Paddy McGowan saw Dromahair take the lead for the first time.

Although Bornacoola hit back with a Trevor Howard free, Dromahair were beginning to move through the gears and with 10 minutes of the opening half remaining struck for the game's opening goal. Paddy McGowan did well to claim Michael O'Hara's kick-out and he quickly released Robbie Cunningham who in turn played a searching ball in the direction of Kevin Conlan.

Conlan did brilliantly to catch the ball at its highest point, rather than wait for it to fall into his chest and he then turned his marked inside out before powering a shot past Bornacoola goalkeeper Gerry Gearty.

Bornacoola responded well to that setback with Trevor Howard converting two frees in quick succession but it was the Dromahair men who finished the half on a high with points from Cunningham and Conlan (free) giving them a 1-5 to 0-5 lead at the break.

Bornacoola made a bright start to the second half with Damien Moran seeing off the attention of Kyle Harte before pointing and Brian Conroy then struck to leave just a point between the sides after good link-up play involving Trevor Howard and Philip Howard.

That Bornacoola momentum was brought to a sudden halt when Dromahair struck for the second goal and again it was a move that began with goalkeeper Michael O'Hara. Rory Kelly made a magnificent catch in midfield and the ball was then worked to the left wing where Gary Fowley ghosted past defenders on the stand side of the pitch in Ballinamore. A shot of any kind looked ambitious to say the least but Fowley's left boot somehow managed to loop the ball just below the crossbar and marginally inside the post to register Dromahair's second goal.

Just two minutes later Dromahair were reduced to 14 following the dismissal of Michael McKeon and Bornacoola set about overhauling the four point deficit. Two pointed frees from Trevor Howard helped reduce the arrears before Adrian Fowley replied with a much needed point for Dromahair were now under plenty of pressure.

With six minutes remaining, Trevor Howard converted another free to leave just two between the sides and moments later Damien Moran scored one of the points of the day after good work involving Michael Duignan, Anthony Mulligan and Ollie Vaughan.

With two minutes left, Dromahair were dispossessed of possession and Trevor Howard pointed to level matters and it seemed as though Bornacoola were on course to claim an opening day win.

However, there was to be one final twist as parity as Bornacoola's numerical advantage was wiped out moments later when Ollie Vaughan was sent off and deep into injury time, Gary Fowley converted a free to ensure Dromahair emerged victorious.